Share All sharing options for: Edmonton's Top 25 Under 25 - #19 Martin Marincin

Junior hockey in Slovakia and the Czech Republic has been struggling over the last several years.  It's tempting to pin that on the dissolution of Czechoslovakia, and maybe that transition has been part of the problem, but the development crisis in that part of the world has really been exacerbated over the last five years.  In this year's entry draft, only two Slovaks and five Czechs were selected, and six of those seven players were playing in the CHL.  And this isn't just a one-time thing.  Here's a chart with the number of Czechs and Slovaks drafted over the last ten years: 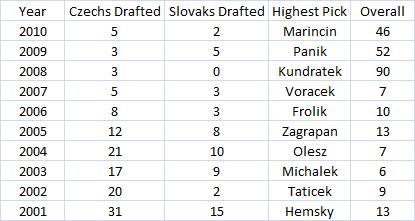 It's not just the entry draft either.  In the 2007 U20 tournament, the only thing that kept Slovakia from being relegated was superior goal differential (although a final 9-0 win against Belarus in the relegation round was pretty emphatic), and help from an already-qualified Switzerland who defeated Germany in the final game.  Later that year, the Czech Republic was relegated to Division 1 after a ninth place finish in the U18 World Championships.

At least partially in response to this worsening situation, the Slovakian U20 team was created to play in the Slovak Extraliga, starting in the 2007-08 season.  This team made it certain that Slovakia's best young players (who hadn't defected to the CHL or other European leagues) would get sufficient ice time and be accustomed to playing with one another when they play in international tournaments (give or take a few ringers who joined them from other leagues).  This is where Martin Marincin - the highest Slovakian selected since Marek Zagrapan in 2005 - played in 2009-10.

But here's the thing.  The U20 team is just terrible.  I'm not talking terrible like the 2009-10 Edmonton Oilers were terrible, I'm talking total depravity here, objects of God's wrath, that kind of thing.  In thirty-six games, the U20 team won five times.  Four in regulation.  Their goal differential was -108.  That's awful in any league, but in thirty-six games that's really, really awful.  I'm making a conscious choice to not use profanity here because if I started, well it would be hard to stop.  An average game saw these guys lose 5-2.  If they lost 4-3, they won.  If they actually won, the other team's coach got fired.  I'm no hockey expert but it seems to me that that might not be the best way to develop your good young players.  The next time you watch Canada destroy a Slovakian team 8-2 and most of the Slovaks look like it's business as usual, just remember that for most of them, it is.

Anyroad, that's the lot that Martin Marincin drew.  TSN has him ending the season with a -27 rating in 35 games but eliteprospects only has him playing in 24 games.  Either way, I'm not sure we'd be able to glean much from his performance on that U20 team.  Derek's review of Marincin before the draft told us about some of Marincin's strengths gleaned from various scouts - size, skating, can make a good first pass but doesn't bring a lot of offense; basically a lesser version of Ladislav Smid when he was eighteen - but until folks get to see him play in a more familiar environment, we're pretty much flying blind.

Fortunately, Marincin was chosen first overall by the Prince George Cougars of the WHL.  Stu MacGregor also talked briefly about putting Marincin in the AHL, but I doubt that happens.  Better to have him playing first pairing minutes in the WHL than hanging on as the seventh defenseman in Oklahoma.  In either case, when it comes time to do these rankings again, we'll have a much better idea of what the Oilers have, both because there will have been many more opportunities to see him play and because looking at his actual results should be more informative.  Right now, I'm cautiously optimistic.