Share All sharing options for: Edmonton's Top 25 Under 25 - #25 Brandon Davidson

Brandon Davidson was first eligible to be drafted in 2009, but all thirty NHL teams passed on the young man who had just finished his rookie season of AAA midget hockey.  Yes, Davidson spent his draft year playing for the Lethbridge Y's Titans, a step up in competition from the year before when he was playing AA midget hockey in Taber.  At the start of the 2009-10 season, Davidson went to Regina to try to make the team as an eighteen year-old rookie.  After a strong start to the season this is what Regina's coach, Curtis Hunt, had to say:

You have to give him full marks for having the determination and drive to get himself recognized and come here with the right mindset to not only make our team but try to make an impact every single night.  He has done a real good job for us and shown he can play on the power play, kill penalties and take an even-strength shift against a top line. He continues to get better every day.

Eight months later that eighteen year-old rookie was getting drafted into the NHL.  What a whirlwind.  For me, Davidson's history is one of the major reasons to believe there may be a player here.  Unlike most of the players his age, Davidson has only recently started getting access to the best available coaching, training, teammates and opposition.  He's already demonstrated strong work habits and has experienced the reward that comes with believing in yourself when it looks like the world has passed you by.  It seems to me that this is a young man with strong work ethic and a tonne of room to grow, a wonderful combination.

Oh, and his results are pretty good too.  After the jump I'll take a statistical look at Davidson and, since Jordan Eberle played for the same club, the Regina Pats as a whole.

There's an awful lot to like about the numbers Brandon Davidson put up this past season.  Although he only scored one goal, he had thirty-three assists to go with it in fifty-nine games.  The only reason he didn't play a full slate was because of a knee injury in December that cost him about a month.  Of course you'd prefer he never get injured but the fact that he missed a month of the season and still did enough to end up on many "Top 100" lists is pretty impressive.  But the points are just the start of the story.  Perhaps the most impressive thing about Davidson is that he led the team in plus/minus by a reasonably large margin; his +15 was well clear of Jordan Eberle's second place total of +8 and even further up on any of the other defenders.  Of course, that kind of record leaves most observers with questions.  My first question in looking at the plus/minus numbers is whether or not Davidson was being sheltered to put up those results.  If so, his season become much less impressive but if in fact he was being used in a shut-down role, his results would be extremely impressive.  Thankfully, we can roll through the WHL gamesheets and use that information to come to some conclusions.  In order to get a sense of the "degree of difficulty" I modified the quality of competition formula first used by Jonathan Willis.

In order to get a sense of the "quality of competition" each player was facing I simply looked through the boxscores and identified all of the opposition forwards on the ice for every goal scored for and against each player on the Regina Pats when the teams were playing 5-on-5 hockey.  The final "quality of competition" number is thus the average points per game of the opposing forwards when a given player is on the ice.  So, for example, a player with a score of 0.500 would be facing forwards who, on average, scored 0.500 points per game in 2009-10.  A score of 0.800 would mean that the average opposition forward scored 0.800 points per game.  It seems pretty straightforward to me, but if you've got questions or suggestions, let me know in the comments.  Anyroad, here are the results for all of Regina's regular defenders (minimum 25 goal events):

Using just five-on-five results there are two defenders who end up on the right side of the ledger.  Although Davidson's number goes down slightly, it still stands out relative to the rest of the group.  However, Davidson seems to be taking on the second toughest minutes for the Pats rather than handling the opposition's most dangerous offensive firepower.  It's probably worth noting that although Davidson looks like he's fifth here, he's actually fourth because Delahey - Davidson's partner for the early part of the season - and McColm were traded for one another half-way through the season and thus never spent time together on the the same roster.  But if you're projecting him as a shut-down defenseman, these results are probably something of a disappointment.

Now, just because I think it's interesting, here's the same chart for Regina's forwards: 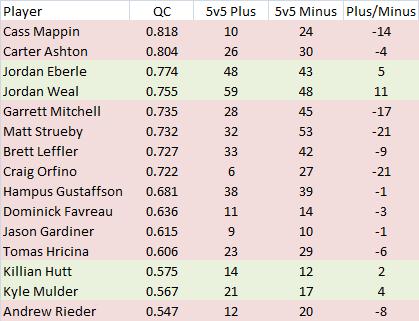 Wowzers did this team every have some terrible hockey players.  Craig Orfino's season is downright nightmarish.  On the other side you've got Jordan Weal who comes out of this exercise looking like an exceptional player.  It's unbelievable to me that he lasted as long as he did on draft day.  Jordan Eberle, meanwhile, comes out of this looking pretty good, one of only four forwards to post a positive goal differential and taking on pretty good level of competition as well.

It's those two Jordans that are the source of my next question about Brandon Davidson's numbers.  Because he scored only one goal  and doesn't have much history it's hard to know if he was picking up a lot of cheap assists by making an easy pass to Eberle or Weal who then made a play to create a goal for himself.  As it turns out, that's not the case.  Of Davidson's thirty-three assists, only nine came on goals scored by either Eberle (8) or Weal (1), or a total of 27%.  Considering Weal and Eberle scored 35% of Regina's goals, that's really not a big number and it suggests to me that Davidson is likely doing something to help create offence for some of his less talented teammates.

The other nice thing about Davidson's results is the amount of scoring he did at even strength.  Of his thirty-four points, sixteen came on the power play and eighteen came at even strength.  Davidson was also on the ice for several short-handed goals, although he didn't register any points.  Taken together, it seems that Davidson is relied on to be responsible with the puck in all different situations; with Colten Teubert and Mitch McColm not returning next year, it seems that Davidson will probably be taking up the slack which means more responsibilities on special teams, in taking on tough competition at evens, and even in his role as a team leader.  There's a lot he'll need to improve on to get to the NHL - especially his skating - but it seems to me that Davidson is building from a nice base of talent and will have plenty of opportunity to grow into a larger role.  Davidson could easily have another year of huge improvement.  I'll definitely be pulling for him.