Who Is The Best Player Available?

Share All sharing options for: Who Is The Best Player Available?

Every time the draft comes around most fans cry out for their team to take the "Best Player Available" when it comes time to make a selection. This is, I suppose, a solid starting point but it's also terribly vague. After all, what criteria establishes which guy is the best? It's my view that the whole point of drafting is to select players that you can't otherwise obtain cheaply, which means maximizing your chances at picking really good players and recognizing that fourth line forwards, bottom pairing defenders and back-up goalies are better than nothing, but ultimately pretty worthless draft picks since they're a dime a dozen in free agency. In other words, you don't try to draft what you can buy at the (Million) Dollar Store.

Having said that, I think NHL teams do a generally good job of valuing talent, but there are significant gaps that can be exploited to come up with a better draft list. I decided to take a look at the drafts from 1997 to 2005 and look at what inefficiencies might exist based on position (i.e. forward, defender and goalie). Where do you find the top forwards? What about top defenders and goalies? After the jump, I'll set some criteria and take a stab at answering these questions.

So what constitutes a "top" forward in the NHL in terms of drafting? In my view, it's those forwards that are expensive and the most expensive players tend to be those players that produce consistent offence. Any forward with the "checker" label likely isn't going to be making much money and the type is frequently available for a song in free agency. It's obviously better to draft a Dominic Moore than a total bust but he's not the kind of player that should be particularly difficult to replace via free agency. We know that because he sign him sign on the cheap almost every year. As such, I've set the criteria for a "successful pick" in these drafts as any player who has played a minimum of 200 NHL games and has scored a minimum of 0.5 points per game.

Defenders are a bit more complicated. The elite defensive defenders make a lot of scratch so it doesn't seem like points is the best measure of ability especially since the power-play specialist type (think Marc-Andre Bergeron) will rack up points but isn't all that expensive to replace. That said, I think a minimum points requirement is necessary; a player with no offence is surely somewhat detrimental. Thus, a 0.15 points per game minimum standard will be used to accompany the 200 GP threshold. In addition, I've decided to use a TOI minimum of 18:30 per game which should eliminate the guys who are just power play specialists.

What of goaltenders? Honestly, unless you get a clear starter who can perform at a high level, there's nothing there that you couldn't buy cheap. As such, the goaltender must have achieved an above average save percentage (minimum .910 over the career) and must have been the starting goaltender for at least two seasons (min. 40 games played per season). These goalies (sometimes) have value. Anything less than that, not so much.

The charts that follow will use this criteria to evaluate how each position does at various points in the draft from 1997 to 2005. In order to make things more fair for the more recent draftees, the games played requirement is cut in half (100 GP for forwards and defenders and one season of 40 GP for a goalie) for all of the players drafted in 2004 and 2005. Despite all of this, I'll be the first to admit that the criteria misses some pretty good hockey players. In my opinion, more good forwards are left out than players at any other position but I did need to set the criteria somewhere and, overall, I'm quite satisfied that the players who are in are good players with very few exceptions: 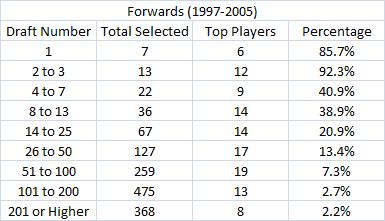 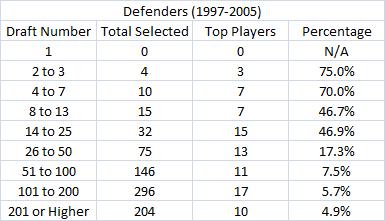 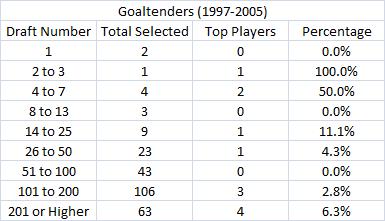 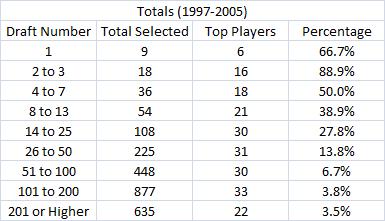 I like these charts because they paint an interesting picture and, in my opinion, don't suggest that there's only one absolutely right way to go at the draft. The most obvious thing to they do suggest is that talent disappears quickly. Scouts are generally pretty good at their jobs and so by the time we're down to the 26th pick, we're already talking about longshots. As such, it doesn't make a whole lot of sense to trade down unless you're trading your fifth rounder for a sixth and seventh. Based on the numbers, you would need to get a crazy offer to justify trading out of the top part of the draft. Now, that changes if your scouts have a very different opinion than the consensus (think Thomas Hickey) but sometimes, that divergence should be a tell that your scouts don't really know what they're doing (think Thomas Hickey).

For the goalies, I think this data makes it pretty clear that drafting goalies in the top 100 is a fool's errand unless you've got a guy pegged to go in the top seven and honestly believe he's a generational talent. And even then, I'd be pretty nervous. Otherwise, the opportunity cost is far too great. Forwards and defenders become impact players far more frequently in the early part of the draft and disappear towards the end. It honestly seems to me like teams would be better off if they focused on procuring undrafted free agents to fill their prospect needs at the goaltender position unless the aforementioned generational talent shows up in the draft but it also seems to me to be quite acceptable to use picks outside the top one hundred on goalies. If we combine the last two rows, defenders have a success rate of 5.4%, goalies 4.1% and forwards 2.8% so goalies do much better relative to their peers in this part of the draft.

That was the easy part. The rest of the data is more difficult. Almost all of the good forward talent goes early and your chances of picking up an impact forward outside the first hundred picks is very small, much worse than the chances of getting a top defender. However, defenders work out better almost all of the time! So what ought to be done? Firstly, I think it's important not to be too dogmatic at this point (like I was above with the goalies). If drafting the "Best Player Available" means drafting the player most likely to become an impact NHLer, well then teams should be pushing defenders up their lists all the time. This does not mean always picking defencemen. It just means that quite often two (or three or four etc.) players are very close on a team's list. If your team's philosophy is indeed, "the best player is the player who's most likely to have an impact in the NHL" then when those "it's close" moments arise, you push the defender up. So, for the Senators last season, that may have meant selecting Jared Cowen 9th overall instead of Magnus Paajarvi-Svensson.

That strategy seems perfectly good, but it isn't the way I would roll. In fact, at times, I would do the opposite. In the first three picks of the draft, I would have an extreme bias toward forwards. There aren't too many sure things at forward, but a top three pick is pretty close. After that, things get dicey. So, for me, if it's close, it goes to the forward to the point that Matt Duchene would have been my pick over Victor Hedman if I were in Tampa Bay's shoes last year but not to the point that I would have taken Evander Kane if the choice was between Hedman and Kane at three. After creating my top three, I would then revert to a bias toward defenders as the draft moves through the top twenty-five. If it's close, give the edge to the defender. The difference is just too much at that point in the draft. For the rest of the top one hundred, my bias would again veer toward drafting forwards, the thinking being that although I have a slightly better chance at a good defender, I have a much better chance at good defenders late than I do forwards and that good forwards are rare, so it's worth taking the chance. For the rest of the draft it's back to a bias toward defenders (and this time a strong one), while valuing goalies equally to defenders. Realistically, I'm probably going to be picking a lot of goalies and defencemen at this point in the draft. The point is, my list is malleable instead of rigid and will change based on where I'm drafting. The key assumption is that my group of scouts isn't way smarter than everybody else in the NHL which is probably a good assumption for most if not all NHL teams. Thus, by making sure that my biases are intentional, I can hopefully exploit the (less intentional?) biases of the scouts on other teams, i.e. that way too many forwards get drafted relative to defenders. In doing so, I believe I have a much better chance at drafting the real best player available.