There is nothing quite like playoff overtime.  Whenever I see overtime in football or international hockey, I dread the shootout throughout.  The ultimate resolution in the biggest game being something completely different from the game itself.  It's rather unsatisfying, though given this particular Flyers' team, I'm sure some fans will disagree.  At any rate, in the NHL playoffs the team game stays that way throughout and those guys will damn well play until someone scores a fucking goal.  It's awesome.  Some of my very best memories of hockey fandom come from playoff overtime.  Buchberger sealing the 4-3 comeback over Dallas in '97.  Cujo and Marchant in Game Seven that same year.  Roloson on Cheechoo in '06.  "Time to kill now."

Last night it was Claude Giroux's moment and even though it's not my moment, it will be an important time of joy in the collective memory of thousands of Flyers' fans for as long as they care to remember.  For the fans in Chicago, if the Hawks lose this series, they won't be able to help but remember.  You can want to forget... but you can't.  It just lives on and on.  And it will live on for Joel Quenneville the most.  He's the man that ordered the change if that Bolland line didn't get the right matchup.  He likely didn't intend for them to come off as the Flyers rushed the puck up the ice after winning the draw but that's exactly what Kris Versteeg and Tomas Kopecky did, the buffoons.  Six perfect passes and it was in the back of the net. 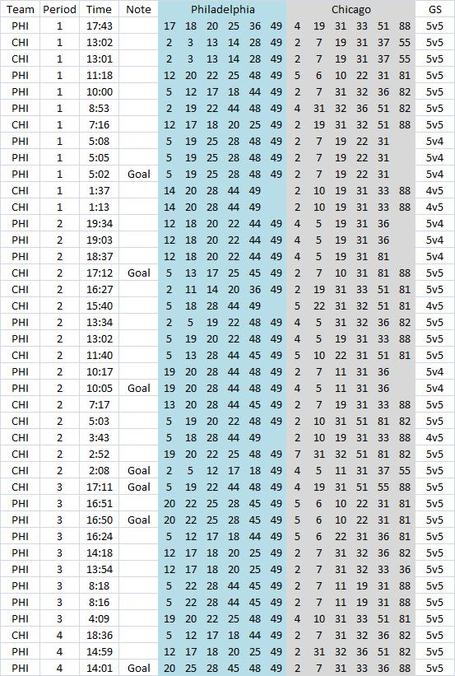 After one game I was surprised.  And then I was surprised again.  And now I've been surprised for a third time.  For three consecutive games, the Flyers have outchanced the Blackhawks by a 4:3 margin or better.  For three consecutive games the Flyers haven't looked out of place.  In fact, for three consecutive games, the Flyers have been the better team everywhere except between the pipes.  And last night, they even managed to win the game!  Patrick Kane's goal to open the third period could have been a dagger to the heart but the goal seemed to instead give the Flyers new life.  After responding with a goal of their own, the Flyers prevented Chicago from generating a single dangerous shot that actually required a save from Michael Leighton.  Ridiculous.  On top of that, they generated a bunch of chances themselves - the puck does need to be somewhere after all - and eventually capitalized by scoring in overtime.  And when that was disallowed, they went out and scored again.  The even strength chances with the score tied now stand at 28-21 in favour of the Flyers through three games.  Every time I look at those numbers, I'm surprised anew.  The Hawks had best get it together if they plan on winning this thing. 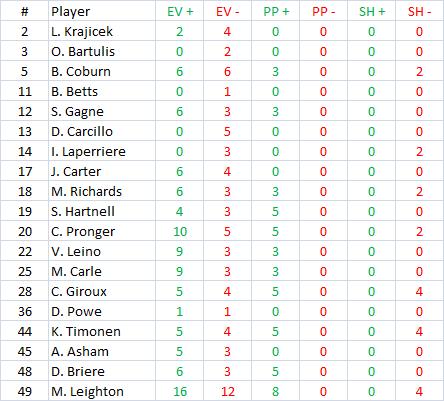 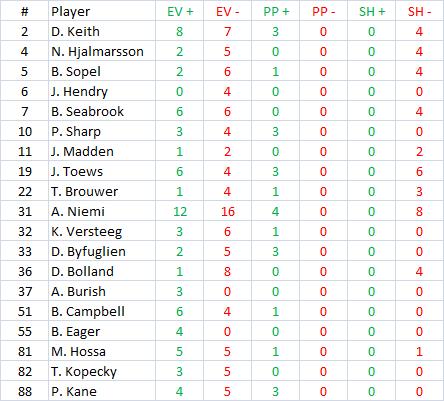 As I said in the opening, Joel Quenneville was crazy about getting his matchups.  Considering the depth of his lineup, the dude should probably lay off the gas a little, especially since it seemed like the Flyers wanted to get Briere on Bolland and Richards on Toews which leaves Marian Hossa and Patrick Sharp to dance.  That's not what I would have done in Laviolette's shoes but it's what he went with.  Why is that so bad for Chicago?  My best guess is that Quenneville doesn't trust the Kane-Toews-Byfuglien group to take on the best the other team has to offer, which is just a little bit baffling to me given Toews' role at the Olympics.  I guess Patrick Kane and Dustin Byfuglien just aren't as good as I thought they were.

The Sons of Light

3. Scott Hartnell - He was such a fun player to watch.  I don't normally put a lot of stock in "hits" as a skill but the players that do it are a lot more fun for fans and often they also exhibit the strong-along-the-boards physicality that I think really helps to win games, which is what I saw from Hartnell tonight.  In addition to being the "energy" player extraordinaire, Hartnell added a beautiful assist on the first power play goal and scored the second power play goal himself.

2. Duncan Keith - Holy mackerel!  This series has a lot of good defensemen!  There were more than a few times when he was scrambling to get back into position but I thought he was clearly the Hawks' best player in defeat.  Much like Pronger in Game One, the EV chances with Keith on and off the ice tell a story: +8 -7 with Keith on the ice and +4 -9 with him on the bench.  Again, like Pronger in Game One, Keith dominated on the Corsi board, registering a team high +13 (the next closest Hawk was partner Brent Seabrook's +7).  Watching first the Olympics and then these playoffs, I've been privileged to see a lot of really good Canadian defenders up close: Drew Doughty, Duncan Keith, Brent Seabrook, Chris Pronger, Dan Boyle.  It's my view that Doughty, Keith and Pronger are well clear of those other two but I have a hard time picking a favourite out of those last three.  If forced to pick just one for one game, today I'd go with Keith.

1. Ville Leino - He had a truly outstanding game.  The goal he scored was a gift from both the hockey gods and Patrick Sharp but there were many other times during the game when he was able to create something from nothing.  My favourite play from Leino came on the power play to start the second period.  After dancing with the puck toward the center of the ice and drawing the goaltender with him, he laid the puck back to Mike Richards for a glorious scoring chance.  Richards missed the net but it was a great play to watch.  The guy played the most sheltered 23:12 you can imagine  - he led the Flyer forwards in ice time and had zero DZ draws at evens - but he made the most of it, leading the team in Corsi by a mile (+14) and turning that territorial advantage into chances.

The Sons of Darkness

3. Patrick Sharp - Sharp spent more of this game up against Briere's line than he did in Chicago and the results weren't nearly as pretty.  Sharp ended the night +1 -4 in scoring chances against Briere and made a really poor decision on the third Flyer goal.  Each of the defenders had targeted one player in a three-on-three situation, leaving the extra man (Leino) for Sharp.  Sharp obviously didn't see that because he left Leino alone.  Of course, Leino scored into the wide open net and the game was tied.  One of many Hawks who simply need to be better.

2. Dan Carcillo - The minor penalty he took was in the first was in competition for the second worst call of the night but even setting that aside Carcillo wasn't very good.  He was already bageled on the chances and his biggest goof of the evening.  As the defenders went for a change Carcillo turned the puck-over carrying it across the blueline only to have his bacon saved by Chris Pronger who managed to beat Patrick Kane to the puck and prevent the breakaway.  Clearly, Pronger is faster than he gets credit for.

1. Dave Bolland - He did get the defensive zone draws in Game Three. Quenneville was trying his absolute best to get the Bolland v. Richards match-up and to facilitate that, Bolland was sent out exclusively for defensive and neutral zone draws (10 DZ draws, 12 NZ draws and 0 OZ draws) but even still, those are some pretty awful numbers.  It's a cruel twist for the Blackhawks that, as Quenneville got his preferred matchup more and more often as the game went on, it led his team to worse results: Bolland was +1 -5 head-to-head against Richards including +1 -4 in the third period and overtime.  Even when Quenneville "won" the match game, he still lost.