You say I took the name in vain
I don't even know the name
But if I did, well really, what's it to ya?
There's a blaze of light in every word
It doesn't matter which you heard
The holy or the broken Hallelujah

Finally, we know the name
of our saviour who can play this game,
the one who really loves to take it to ya!
Now we won't take that name in vain
but every Oiler fan is prayin'
for the holy, not the broken HALLelujah

After the jump, a few blurry memories of  the scene at Rexall Place as the Oilers drafted their latest saviour.

My pal and I pulled in around 15:30 to find the outdoor barbecue in full swing. The line-up stretched from the south entrance of the arena, right past the LRT exit, across the pedestrian bridge, through the parking lot, and further on south in the general direction of Leduc. One line. We went around the building and found that the northern line only stretched as far as Fort Saskatchewan, so we joined that one. Luckily it was a nice day, and it was fun to chitchat with exuberant Oiler fans sporting their full colours as we waited. Many had a strong favourite, with Hall leading by about a 2:1 margin in an extremely limited impromptu poll. The free burger was almost worth the price, and the choice between coke and coke was just perfect, especially when it turned out they were out of coke. (Coke gives me heartburn.) But nibbling away in the shadow of the Gretzky statue seemed kind of all right.

We weren't really there for the free food, so soon enough we went inside and found a seat near the big screen and the podium. The whole top section was curtained off, and nearly half of the lower bowl was as well, but with tables on the floor we figured the capacity to be 4 to 5,000. So when Steve Tambellini talked about Oiler fans filling the building, he surely meant in the metaphorical sense. But certainly that section of the building was pretty full as T-Time approached.

As we waited we watched the documentary/infomercial Oil Change on the big screen. Having seen it last night I watched for different things, especially the responses of the Oiler brass to the prospect interviews. Watching Stu MacGregor smile when Taylor Hall said "I have to go to those places", and reading Steve Tambellini's body language during that whole sequence, I realized, This is the guy they like, and tweeted accordingly.

They soon switched to live programming, with the MC dude introducing 5 high draft choices currently property of the Oilers: Jordan Eberle (huge cheer), Ladislav Smid, Jeff Deslauriers, Devan Dubnyk, Sam Gagner (second biggest cheer). No sign of Andrew Cogliano, which I thought a little odd, at least at first. He then introduced "your new head coach, Tom Renney" who got the most tepid applause of any of 'em. Renney has been around, and he's not dumb; after they asked a preliminary question of each player, they asked Renney why he was excited to be coach of the Oil and he said "I can see 5,000 reasons why, right here" and of course the crowd ate it up. Renney handled all subsequent questions effortlessly, told us what we all wanted to hear, pressed the flesh, signed autographs, went the extra mile, and, I suspect, won himself a few new fans tonight.

They then cut to LA to do a short interview with Tambellini, whose little speech wound up with "Trust me (!), we feel as excited as you." This sort of inside coverage was interspersed with the regular draft coverage of TSN. When Darren Dreger mentioned that the trade discussions with Boston for #2 OV might involve Hemsky and Eberle, the crowd booed loudly at the mention of the second name, not the first. The kid has already got a huge fan base here, and until he actually plays for the Oil he can do no wrong.

The TSN coverage was a little self-referential in that TSN had cameras right in Rexall, and when they went live the crowd acted en masse like people usually do when they see themselves on the big screen, which is to say, stupid. A fair bit of the coverage was drowned out.

Then Gary Bettman took the stage and was roundly booed in Rexall, just as he was at the Staples Center and presumably at the 28 other draft parties seemingly held around the league. (Well, Calgary and Toronto are probably waiting until tomorrow afternoon to have theirs.) The little man is universally hated.

Finally the big moment was at hand, and the tension rose a little more as a confident-looking Steve Tambellini took the stage with a largish group that included, to my surprise, Paul Coffey, the HALL of Famer the Oilers drafted with their first pick 30 years ago. Nice touch. Tambellini took the mic and confirmed that Taylor Hall was the Oilers' choice. The crowd rose and cheered, the goal horn blared, silver confetti filled the air. Only about 2/3 of it seemed artificial. The exuberance of the crowd seemed pretty real, for the most part.

I had deliberately dithered and fence-sat lo these many months as the Taylor-Tyler talk took place, but just in the past 24 hours or so had reconciled myself that a) it would definitely be Taylor and b) that I would be perfectly fine with that. The best description of their contrasting styles was coined by somebody whose identity I've forgotten who called Seguin's game "cerebral" and Hall's "visceral". A team needs both, but I think this team has really been lacking in the latter, so let's hope Hall delivers on that score. For sure he's an incredibly exciting player to watch, and we can use some of that too. Hallelujah!

We listened in again for awhile as Tambellini and Hall were interviewed, but as soon as Hall let slip that he was excited to play for a Canadian team, the cheers drowned out the rest of whatever it was he had to say. Which by no means was all bad.

The crowd watched with considerable interest as the Bruins chose Seguin - I particularly enjoyed the scene where Peter Chiarelli and crew walked right past the Maple Leafs table as they strode purposefully toward the stage - but gradually that interest diminished as the minutes ticked by, only occasionally interrupted by an actual pick. During commercials they would cut to interviews in L.A. or to roundtable discussions with the players in the arena. Gagner and Smid gave encouraging updates on their health, while the rest told excitingly similar tales about their summer training regimen and such. Slightly more interesting was Tom Renney's comment that "One guy can make a difference in the room if he's a bad guy. If he's a doorknob you don't want him."

The cuts to Staples Center weren't exactly cutting edge stuff either. Kevin Lowe: "He really wanted to be an Edmonton Oiler and that makes a difference as well." Paul Coffey: "I was surprised when they asked me if I wanted to represent the Oilers, and couldn't say yes fast enough." Meanwhile, I entertained myself by watching how Bettman would greet new players to the league by standing at the top of the stairs and shaking hands when they reached eye level, which was usually a couple steps down. The commissioner is getting crafty.

The Oilers promised 100 Taylor Hall sweaters which kept people around awhile longer, but once those were given out the place cleared out pretty fast. There were maybe a couple hundred people at most left by the time my bud and I decided to pack it in around pick #16. A long walk to the car, a longer drive across the city, and I plunked myself in front of the TV in time for pick #21. They sure did drag it out. It probably seemed especially long because Oilers' participation in the proceedings was over real early.

I'll leave you with a cell-phone image of my favourite fan of the night, who gets bonus points for creative recycling of an old Chris Pronger sweater. 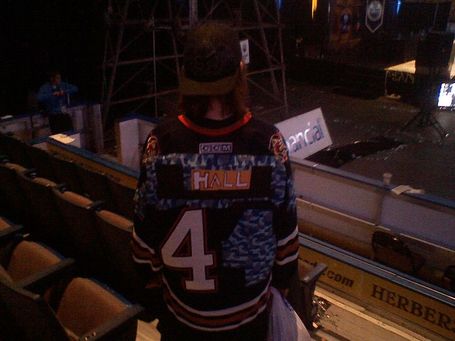