Share All sharing options for: Blackhawks and Flyers - Series Review

With news pouring in that the Blackhawks have cap problems that are even worse than expected, it's a darn good thing those boys came through and won the Cup now.  This new NHL is a bit of an odd duck as your best chance to win it all seems to come before rather than during the prime of your most talented players.  As Tyler mentioned a few days ago, let's hope the Oilers are taking notes.

During the regular season the Blackhawks were clearly the better of the two finalists but that considerable gap wasn't obvious to anyone who hadn't followed both teams closely during the season.  Indeed, though there were times when the Hawks looked dominant, there were also such times for the Flyers and, on the whole, the teams were very evenly matched.  Well, except in goal where Antti Niemi allowed less than three goals only once... and was clearly the better netminder.  Crazy stuff.  Scoring chances and analysis after the jump.

I'll start by giving the links to each game in case you want to be reminded of any particular contest when looking at the series totals:

I wanted to start by looking at special teams since that's where the Flyers have the bulk of their advantage.  Coming into the series I thought that special teams would be a big advantage for Chicago and so having it go so far in the other direction was a big surprise.  I thought that the Hawks advantage would mostly come through having more opportunities but that just didn't happen.  In fact, the Flyers ended the series having played 36:17 on the power play compared to only 30:06 for the Hawks.  On top of having more time the Flyers were also more efficient.  For every 2:00 of power play time they generated a chance differential of +1.76 whereas the Blackhawks generated a differential of only +1.33 for every two minutes.  Both more opportunities and better efficiency is a good combination.

Turning our attention to even strength play, the Hawks did have an advantage at even strength in the first two periods but then pissed it all away and more in the third period and overtime.  Some of that has to do with having the lead more often in the third and taking a defensive posture but even when the score tied they were outchanced 12-9 so at least a part of that shift seems to be for reasons other than playing to the score.  Looking at the game-by-game totals, you'll notice that the Flyers were even or better at even strength in every game but one.  You would think keeping things even or better at even strength combined with a substantial advantage on special teams would have been enough to win but when bad luck and bad goaltending get together they're an awfully powerful force. 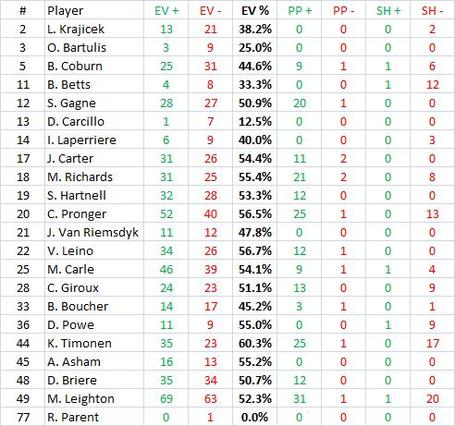 Chris Pronger is an absolute beast.  He  was +3 -13 in EV scoring chances in Game Five and still had over 55% for the series as a whole.  If we take out those Game Five results his SC percentage soars to 64.5% which is amazingly good.  He was also an entertaining villain, much moreso than I ever remember before and for that the league probably owes him.  The NHL doesn't often have a lot of personality but that sure wasn't a problem in the Finals with Pronger standing above the rest.  The "other" top Flyer defender, Kimmo Timonen, also had an amazing series.  The gap in performance between Timonen and the other non-Pronger defenders is probably best seen in his numbers compared to that of his regular partner, Braydon Coburn.  Timonen actually played fewer EV minutes than Coburn but the two were together for about 67% of Coburn's EV TOI (and 79% of Timonen's).  When the two were together the Flyers were +20 -16 for scoring chances (55.6%).  Timonen with other partners ended up +15 -7 (68.2%), while Coburn was +5 -15 (25.0%).  Now, it's quite possible that Timonen played in offensive situations when the two were apart and Coburn in defensive ones but even if that is the case, that is just an enormous difference.  With both Pronger and Timonen on the same team, it seems to me the Flyers have some amazing pump and dump opportunities over the next couple of seasons.

The forwards are an interesting study.  Both Briere and Richards had lines that were outchancing at even strength and yet both of them were slightly outshot.  The goal differential?  Yeah, that wasn't the same.  Check out this chart of even strength shots and goals (empty-netters excluded):

That's a pretty stark contrast!  It's a real shame for the guys at the bottom that the percentages are what usually drive playoff narratives because these guys are getting their asses handed to them in that department.  Jeff Carter especially should be lauded for what he was able to accomplish playing through an injury, but sometimes it's difficult to see through a -5, a -6 or, God forbid, a -8.  At the other end you've got three guys outscoring so far above their abilities it is to laugh.  I know it's hard to part with playoff heroes but this run could really net the Flyers a bounty if they can convince themselves to trade Ville Leino to someone who believes that he's the real deal and move Danny Briere - though he has a NMC - to a GM who feels his playoff performance shows that he's worth his contract. 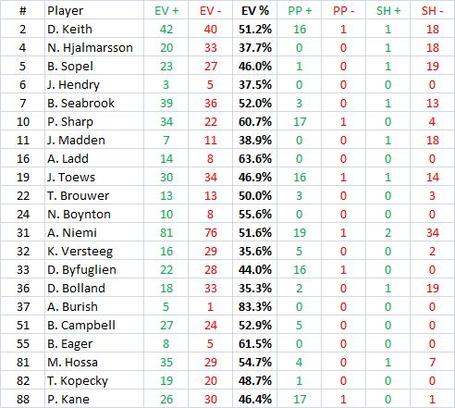 The Hawks numbers aren't all that flattering.  Dave Bolland's line was the main beneficiary of Yahweh's wrath against Carter, Gagne and Richards with flat-out incredible percentages at both ends of the rink.  Given their cap crunch, I'd be really tempted to move Dave Bolland on out if there are general mangers who believe in him as much as the general public.  If so, he could be moved for real value without much loss in performance. After all, it can't be that hard to find someone who gets the crap kicked out of him while taking on defensive assignments, that is unless his magic is real.  Unfortunately, his magic is probably about as real as that of Benny Hinn (I can see Bruce sizzling on the floor now, "Bolland is real!").  Can we nickname Bolland Benny Hinn?

Two guys who should absolutely stick around are Marian Hossa and Patrick Sharp.  When they were on a line together, the two of them were fantastic, both in this series and before.  Once they were separated, Hossa did a wonderful job with Jonathan Toews while Sharp formed a fantastic line with Patrick Kane and Andrew Ladd.  If I were in Stan Bowman's shoes, it's those five forwards that I would be trying my best to keep together.  Obviously they'll be keeping more than five of their current guys, but those five form a very nice core.

On defence, the Hawks had a tremendous top pairing and that's about it.  Niklas Hjalmarsson, Brian Campbell and Brent Sopel all had some nice moments but for the most part were less than what was needed.  Hjalmarsson obviously played a much larger role than what was expected of him so he deserves some credit there but he looked overmatched at times and made some really bad gaffes, especially in Game Four.  Sopel had a similarly larger role and didn't struggle quite so badly, but he's probably a guy you'd like to have fifth or sixth on the depth chart and the Hawks really can't afford that right now.  And then there's Campbell.  He looks good by the scoring chances but he was used almost exclusively in the offensive zone so, in my opinion, you'd hope for a bit more.

Finally, it was a great series to watch and a thoroughly enjoyable playoffs overall.  I hope Oiler fans watched it because, cheering for a team like that, I think you need good hockey to keep you going.  Next up is the draft and the UFA derby.  Unfortunately for the Hawks (and fortunately for the rest of the league!), the off-season could be almost as exciting.