The second period starts slowly.  There is still ample tension but the game is more subdued physically than it had been in the first.  The play goes back and forth but neither team can penetrate the defence for a good chance on goal and the goalies who looked so shaky in Game One have still barely been tested.  Without warning, the game shifts.  Mike Richards takes a Moreaunic hooking penalty in the offensive zone (redundant, I know) as he tries to slow Brian Campbell who he's racing for the puck.  As the play concludes, Dan Carcillo hits Campbell as if to remind us that hockey is a strange game.  The violent play is consequence-free but the skillful stick earns two minutes of shame.

The Hawks are as stifled on the power play as they had been at even strength and the two minutes come and go without a shot on goal.  Richards is out of the box inspired to make amends.  He takes a pass from Simon Gagne and breaks in on goal alone, a cold Niemi the only man standing between Richards and a "History Will Be Made" promotional video.  Alas, history wasn't made, at least not in the way Richards had hoepd, but the flood-gates are opened.  Duncan Keith with a shot off the rush, Ville Leino with a power move to the front of the net, Richards again off a steal and Marian Hossa with a one-timer from the slot.  It looks like these goalies are playing pretty well.

The teams are set for a faceoff in the offensive zone.  Oskars Bartulis' chance to clear goes hard up the boards but is kept in at the line by Keith.  A second chance for Lukas Krajicek is ripped around the other side with a bit more urgency but this time Seabrook holds it in.  The puck comes to Sharp in the high slot who wastes no time in getting the puck on net.  Like vultures Brouwer and Hossa swoop down to pick Bartulis' and Krajicek's flailing carcasses and the Hawks have the lead.

And then it's 2-0.  Ben Eager is as surprised by his abrupt interjection as he is excited. 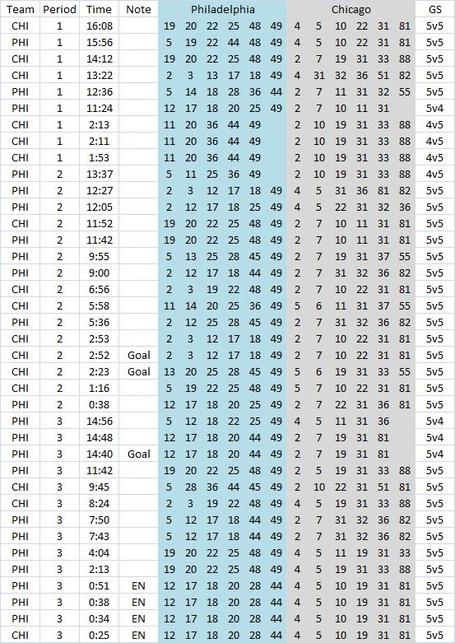 In Game One the two teams had six chances each at even strength chance with the score tied.  In Game Two, both teams earned eight chances with the score tied.  Philadelphia may be down 2-0 in the series but they haven't looked like the mediocre Eastern Conference team that many were expecting.  In fact, netminding aside, describing the series as even is being charitable to the Blackhawks more than it is to the Flyers.  As for the third period, I think the Flyers deserve a lot of credit for their +8 differential.  The Blackhawks weren't sitting on their lead.  They were willing to forecheck with two attackers and when a defender had an opportunity to jump into the play with minimal risk, he didn't hesitate.  This was more a case of the Flyers being aggressive and earning chances as a result.  The empty-net chances at the end are a good reflection of the Flyers' attitude throughout the period.  I thought it was kind of funny that Laviolette decided not to pull Michael Leighton after the Hawks iced the puck 1:55 only to then pull him when they iced it for a second time ten seconds later, but his second call was, in my opinion, the right one and a very aggressive move compared to many other NHL coaches.  The Hawks were trapped with Niklas Hjalmarsson and Brent Sopel on the ice and the Flyers almost capitalized.  Laviolette's decision to keep the goalie pulled with a defensive zone faceoff and under thirty seconds to go was another good aggressive call that  might be considered unconventional.  Bottom line: the Flyers earned their chances but just couldn't score. 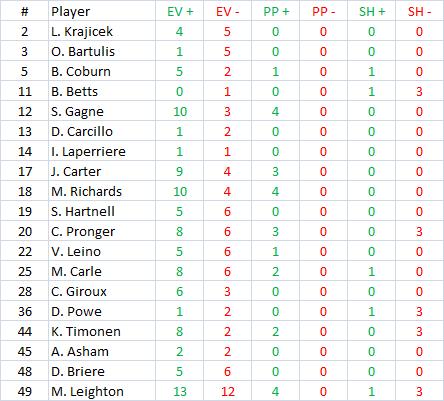 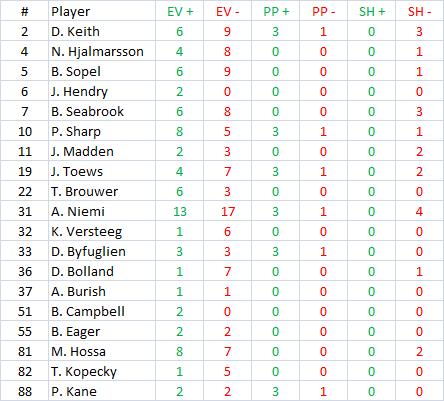 Both teams were much better tonight which made for a more exciting hockey game.  For the Flyers, the top line was dominant, especially in the last two periods.  I don't know if they were at all spurred on by Dan Carcillo's antics but I thought that guy's play in the first period made it one of the more exciting first periods I've seen in the playoffs (though that head-butt on Tomas Kopecky was filthy).  For the Hawks, the top line was a lot better.  They didn't generate much offense but they weren't giving a tonne back either, which is a big improvement over Game One.  Still, there's no question in my mind that Hossa, Sharp and Brouwer were, again, Chicago's best line.  If I was Peter Laviolette, I'd be tempted to match Richards, Carter and Gagne against Hossa, Sharp and Brouwer.  I can't imagine Bolland's group doing as much damage as Sharp's against the lower half of the lineup and if nothing else it will make Quenneville work hard to get the matchups he wants.

Inhabitants of the New Jerusalem

3. Simon Gagne - He played most of the game with Mike Richards and Jeff Carter and that line did a very good job.  They may have been Philadelphia's worst line in Game One (relative to expectations) but tonight they were by far the Flyers' most dangerous unit.  Gagne himself had a splendid game.  The scoring chances include Gagne's goal of course but that certainly wasn't the only one that involved Gagne directly  A couple more were Gagne's own shots and still others involved some great passes.  His best pass is likely the one to spring Mike Richards at 12:27 of the second for a breakaway but...

2. Antti Niemi - made the save.  After a poor game in Game One, Antti Niemi was very good in Game Two.  He was the best goaltender in the game and that was one of the biggest reasons the Blackhawks won.  The Flyers had several chances but tended to miss the net (or hit the post in the case of Claude Giroux) when they went for the high part of the net and couldn't beat Niemi when they went for the low part of the net.  It seemed to me that Niemi played a very strong positional game.

1. Marian Hossa - He was stirring the drink on the line with Patrick Sharp and Troy Brouwer.  The chances don't look all that favourable at +8 -7 but he was +7 -4 without the empty-net sequence at the end of the game.  He was justly rewarded with the go-ahead goal, scored with a wonderful combination of Hossa's skills.  He identified an opportunity, moved in quickly, was strong enough to gain position and elevated the puck from in tight.  Hossa has been great in both of the first two games and if Chicago wins, he'll be the guy I'm most happy for.  I like to imagine Patrick Kane celebrating this win only to have Marian Hossa grab him by his popped collar and yell, "Respect the hockey gods!" as he shakes him half to death.  At the very least, I guarantee Hossa is the guy least comfortable with a 2-0 series lead.

Cast Into the Lake of Fire

3. Danny Briere - Yeah, not so good this time.  I thought he ran around a bit when the puck was in the Flyers' zone but by far the most egregious play was the sequence beginning at about 1:25 of the second period with the Hawks up 2-0.  Briere got the puck at the Hawks' blueline but instead of getting it deep, he skated back toward his own zone.  Patrick Sharp followed and instead of moving the puck to a teammate, Briere decided to grab Sharp's stick, either to try to draw a penalty or because he was afraid Sharp was going to steal the puck.  At any rate, he doesn't get the call and Troy Brouwer sneaks in to steal the puck and gets a great scoring chance.  This is followed by Marian Hossa getting the rebound, though at least his shot was blocked.  This was a terrible sequence by Briere that really ought to have resulted in him getting a penalty in the best case scenario.

2. Dave Bolland - Well, when you take out that empty-net sequence in the third he's... still -6.  Damn.  At least he was starting a lot in his own zo...not so much.  Nine OZ draws against seven DZ draws in the game at evens.  In addition to the -6 for the chances, he also "led" the team with a -11 Corsi.  Just bad.  In fairness, he is playing with Tomas Kopecky who, at least in my opinion, is pretty awful.  Against the Canucks Kopecky played with Sharp and Hossa and they just looked awful.  Then Brouwer replaced him and things were fine!  I know the Bolland line wasn't any hell against San Jose with Andrew Ladd in the lineup, but I'd be willing to bet that Ladd is a big improvement on Kopecky.

1. Oskars Bartulis - This was weird, weird, weird.  Bartulis played 10:45, all at even strength.  The last time Ryan Parent played at least that much?  The 6-0 win over Montreal.  If Bartulis is going to play this much in a close game, why on earth was Parent even in the lineup before?  A partial answer would seem to be that Bartulis is pretty terrible.  (Edit: Thanks to Geoff Detweiler for correcting my memory of events on this sequence)  On the Hawks' first goal - and why you would use Bartulis and Krajicek for a DZ faceoff I just don't know - Bartulis wasn't able to clear the zone while his partner wasn't able to clear the rebound and wasn't able to box out Hossa.  On the Hawks' second goal, Bartulis and Krajicek were on the bench.  Do you see how easy that is?  I guess some of the defenders must have told the coach that they couldn't handle thirty minutes a game.  This is bad, bad news for the Flyers.