The Art of Negotiation - a photo shoot

Share All sharing options for: The Art of Negotiation - a photo shoot 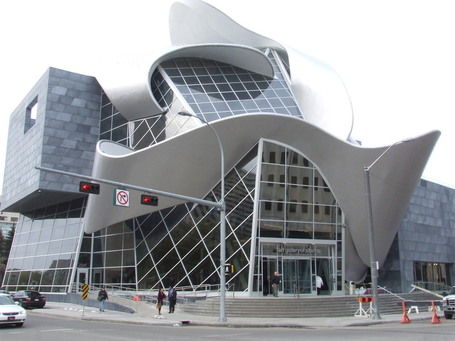 On Thursday the Katz Group took their vision of a new arena to the public, hosting an open house at the spectacular new Art Gallery of Alberta. Being the only Copper & Blue writer living within 1000 km of Edmonton, your intrepid reporter dropped in for 90 minutes or so last evening, camera in hand. I was cleverly disguised in a Canada hoodie and a Zamboni ball cap as an ordinary, if poorly-turned-out, citizen. I was there to gather information, not take sides, so if you are looking for a scathing editorial pro or con, this ain't the place. At least, not yet.

Somebody in the Katz Group chain of command had a lucid moment in choosing the superb new Art Gallery of Alberta to host the event. AGA is a shining jewel of new architecture in the downtown core, built on time and under budget, an example of another dream that has actually come to fruition. No doubt many of the ~3,000 people who dropped into the open house were darkening the doors of AGA for the first time, and that was part of the attraction at least for some. I noticed more than a few people gazing around the interior of the building.Thought C&B readers from outside the city might enjoy this shot of the facade of the new cultural centre which opened its doors just three months ago. Let's step inside, shall we? 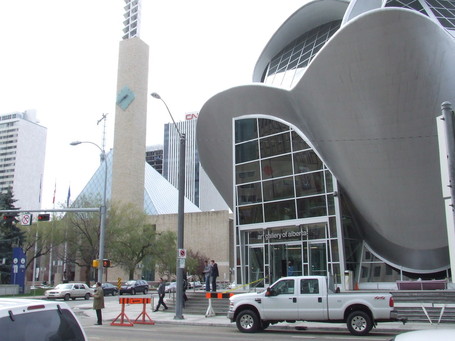 Opening faceoff: Thursday's festivities marked another step in the convoluted dance between Katz Group and City Hall, symbolically situated right across the street from the open house. Itself a distinctive structure, City Hall is the glass pyramid with the friendship/freedom/something-or-other tower in front of it.

This being Alberta, construction signs and a truck-and-a-half where you don't really need it are de rigeur. 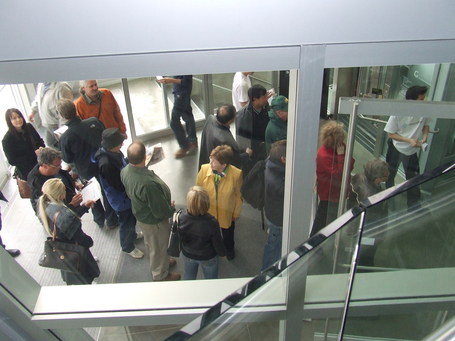 A queue of a couple dozen people waited patiently in the entryway as the lobby was near capacity throughout the time I was there. 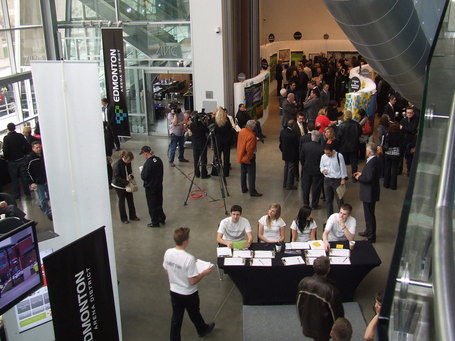 A phalanx of hot young women and hunky young men of the type who toss out prizes during games or sweep the ice during TV timeouts were poised to greet all visitors and collect names, of which some 3,000 were reported (and I believe it). Apparently Zack Stortini put in an appearance earlier in the day, alas not during my time at AGA. It seemed like all hands were on deck for the Oilers give or take the training staff. Wait a minute, the Oilers don't have a training staff. 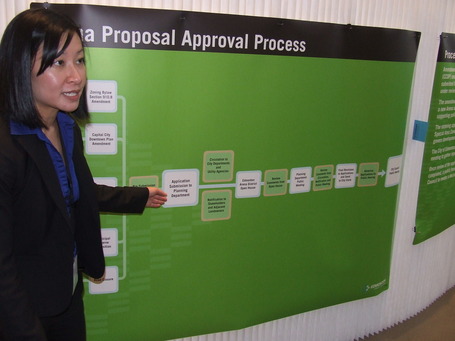 Katz Group spokespeople hosted each exhibit. By this time they had been at it for eight solid hours but were hanging in gamely. 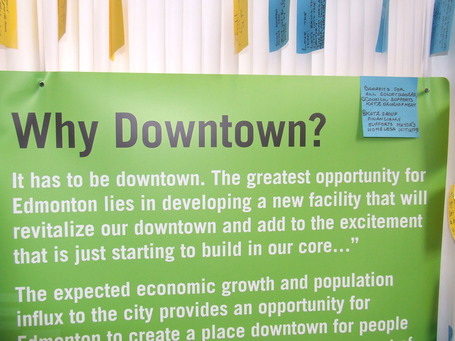 This made both Andy Grabia and me laugh. I named this photo "Because Why? Just Because!" 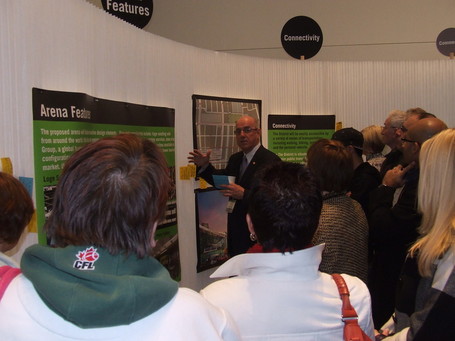 Patrick Laforge holds forth in front of an interested audience. I spoke to Laforge briefly, and while he has the meet-and-greet down pat right down to the "I own you" handshake, after two questions his attention quickly wandered and suddenly I didn't exist.

I had more favourable experiences speaking at some length with Bob Black of Katz Group and Ted Tanner of Anschutz Entertainment Group - no pix, sorry - about matters ranging from architect (not yet hired) to finance (premature, not sufficiently negotiated to be ready for public consumption) to the upcoming civic election (apt to slow the process) to the softness of the 2014 "deadline" (got to shoot for something, but it's not like we'll be kicked out of the old building) to parking (lots available, and maybe not as expensive as I supposed (yeah, sur-re)) to wintertime sun angles into the proposed winter garden (going to be a problem no matter what) to environmentally senstive design (yeah we're all for LEEDS silver if not gold). The boys talked a pretty good game, and Tanner had some interesting tales of downtown arenas elsewhere, notably Staples Centre in which AEG plays a central role. In general there was a whole lot more they couldn't say than could. A lot of it was old-fashioned spin-doctoring, selling the big picture concept, at least beginning the process of public consultation after rather too much secrecy to this point.

No sign of Kevin Lowe while I was there, that said I was awfully late for breakfast. 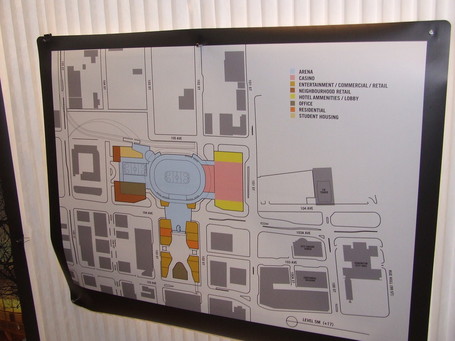 The footprint of the proposed arena project. At this point and until an architect is hired, it is a very much a two-dimensional concept, largely with zoning requirements in mind. 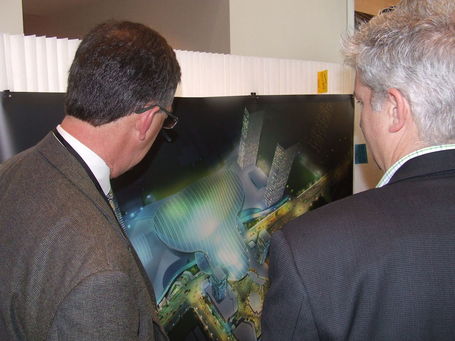 Artist's conception: an aerial view. The thing looks like a bicycle seat, or as one of the commenters said in David Staples' three-part series over at Cult of Hockey, an athletic cup. It also looks a great big freakin' lightbulb, fully lit and a very long way from being environmentally sensitive. 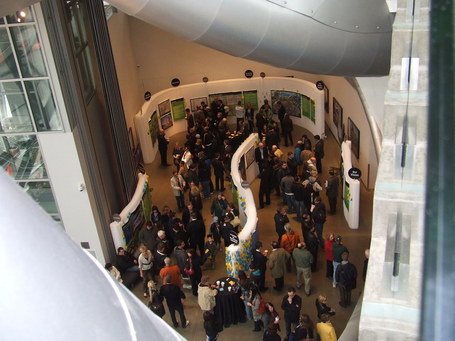 An overview of the main display area taken from the 2¾th floor. 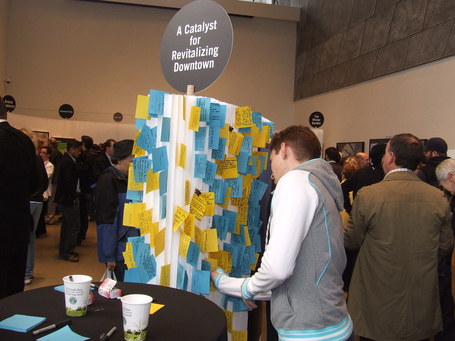 Comments and feedback were actively sought in writing as well as in conversation. Folks wrote their thoughts on post-its and attached them to these accordion-like collectors. I read a smallish sample and found opinions to be fairly sharply divided with many seemingly already decided on the matter, pro or con, much as I had found in the several conversations I overheard.

I'll leave the last word to my favourite post-it. 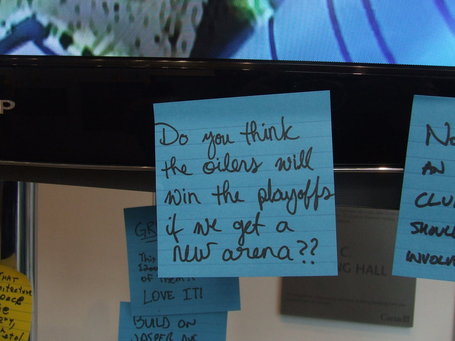