Just as in Game Two, the Vancouver Canucks were the much better team through the first period, but unlike Game Two, Antti Niemi was able to stop absolutely everything thrown his way and it was the Blackhawks who headed to the intermission with the lead despite being soundly outplayed.  By the end of the second period, the Blackhawks held a one-goal lead, just as Vancouver did at the end of the second period of Game Two.  And in that game Vancouver was out-chanced in the third as they tried to nurse the lead home, eventually losing the game in regulation, a result reminiscent of Game Six between the Canucks and Kings in the first round.  The Blackhawks had no such trouble.  The third period was by far their best and they ran away to hide, at least in terms of the score.  When it came to the rough stuff the Hawks were more than happy to stay up close and personal.  Scoring chances and more after the jump. 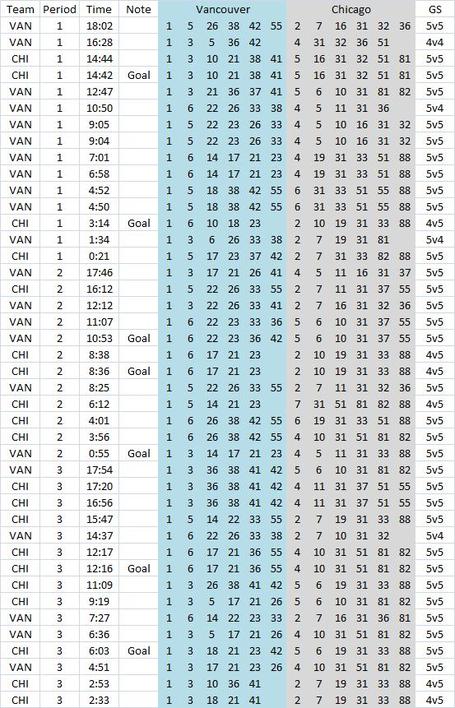 Vancouver was dominant at even strength through two periods, though I did notice that CBC had the chances at 14-10 in favour of Vancouver to start the third which looks a lot closer than my 17-10.  Anyroad, they played about as well as they can play in the first period except for a couple - literally - of key breakdowns around their net and the second was more of the same, except with a few dumb penalties mixed in.  I was quite surprised when Alain Vigneault decided to break up his two best lines, flipping Samuelsson and Burrows for the third period (I'm generally of the "if it ain't broke, don't fix it" school when it comes to line combinations).  His team was playing well and getting plenty of chances and had in fact narrowed the gap to one at the start of the third.  I don't think the turn-around for Chicago in the third should be laid at the feet of that change - it's probably more coincidence than anything - but it certainly didn't help the Canucks generate any more offence and just struck me as odd. 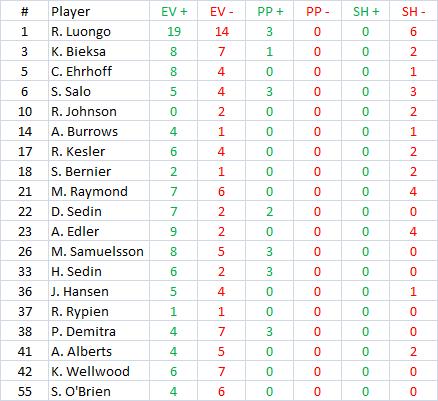 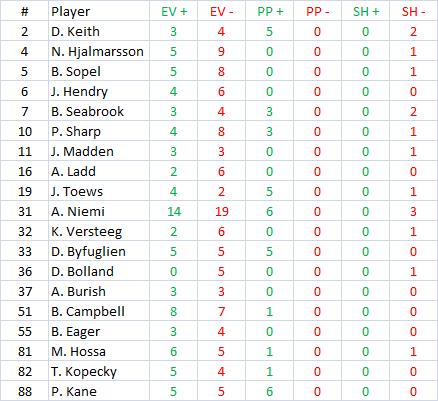 Well, Dave Bolland's line - along with Keith and Seabrook - got trashed by the Sedins, but there will be more on that below.  One guy I won't talk too much about is Ryan Johnson.  I thought it was pretty funny that after making such a big deal about Johnson's PK ability the Hawks scored about six seconds into his first shift on the PK.  Thanks for the help Ryan!  After watching this game, I definitely stand by my statement that the guy they really miss on that PK is Willie Mitchell in front of the net.

And just because I can't help myself, that "Ref, you suck" chant after Alex Burrows did something stupid pretty much sums up why this group of fans likes Alex Burrows so much.  You'll be happy to note that despite the penalty, I didn't even make Burrows a goat.  It was tempting.  But I let it go.  Kind of.

3. Daniel Sedin - Daniel was on the ice for Jannik Hansen's goal (I liked Hansen last night as well) and seemed to be the most physically involved of the Sedins so I gave him the nod as a star.    It must have been particularly encouraging for Canuck fans to see the Sedins own the puck at even strength against the very same line that contained them in Game Two (Dave Bolland, KrisVersteeg and Andrew Ladd) because that bodes well for the future.  The results themselves - including the +5 SC's and +15 Corsi (Henrik was +18) - shouldn't be discouraging even though they didn't score.  The Sedins have been shooting the lights out all playoffs so you kind of knew that a dominant game would go unrewarded eventually.  They were fantastic offensively but couldn't get anything to go into the net.  Ask Alexander Semin about nights like that, he had about seven of them in a row.

2. Dustin Byfuglien - He's at the top of everyone's list.  The Canucks couldn't handle him well once the puck got to the net, evidenced by three goals from the top of the crease.  He was also one of the few Blackhawks to finish even or better in all of Scoring Chances, Corsi and Fenwick so it wasn't like he was only effective on the goals.  There were also a couple of non-scoring plays that really stood out.  At the end of the first period, Byfuglien was chasing down a puck in the Canucks' zone.  He managed to beat Alexander Edler, despite Edler having a huge head-start (hmmm, I wonder why) and then proceeded to shield the puck as he went by two Canuck defenders to the net to get a scoring chance - very impressive.

1. Antti Niemi - He had a really rough game to open the series but he's been mighty fine since then.  Without Niemi making a number of really good saves through the first period this game could have been very different.  His team was out-chanced 11-4 through one and 17-10 through two and yet still had the lead which is a fine accomplishment.  Aside from those chances, Niemi was also very good at making sure he wasn't screened.  The chance totals could have been much higher if I had counted all of the "near" screens when Vancouver took shots from the point.  One of the big reasons I didn't was Niemi himself making sure that he had good sight of the puck.

3. Jordan Hendry/Brent Sopel - I didn't like this pairing but picking just one of them proved difficult because so many of the mistakes seemed like they were made as a pairing.  The chance at 12:47 of the first is a break-away for Jannik Hansen where Hendry and Brent Sopel just let Hansen sneak behind them for a pass.  That pairing was out again on the Canucks' first goal where they were unable to get control of the puck or clear the front of the net.  In some ways, it was a lucky goal (it bounced in off of Hansen's arm) but the Canucks' were also able to create that situation pretty consistently against these two (possession, followed by a shot from the point with some Canucks looking for rebounds).

2. Roberto Luongo - I don't know if you heard much of Jim Robson on Hockey Night in Canada but I thought pretty much everything that guy said was on the money (with the possible exception of his adoration of the 1994 Canucks, though bringing all of those names to mind showed an impressive memory).  His style was blunt without being bombastic, which was also a big help in terms of likability.  Basically, they should get rid or Milbury and bring in this guy.  Anyway, one of the things he said in the second intermission was that Luongo didn't look so good giving up those rebounds.  For whatever reason, he just wasn't able to squeeze the puck often enough in this one and it really cost his team because...

1. Alexander Edler - ...the defenders couldn't get control of the front of the net!  I promised Bruce a make-up call on Edler so here it is even if it might be hard to justify.  He did after all go +7 in scoring chances and +14 in Corsi.  But a lot of those pluses came in his time with the Sedins and the few minuses he did achieve were emblematic of what went wrong for the Canucks.  I already described the play where he looked scared to go into the corner first with an on-coming Dustin Byfuglien.  On the one hand, understandable, on the other, kind of unacceptable, especially if you lose the battle and the puck ends up on goal from a dangerous spot.  And then there were the goals.  He wasn't the only one who lost position or got out-muscled for rebounds, but it happened to him on three of them.  On the second Hawks goal he let Byfuglien take position in front for the rebound as he skated by.  On the third goal he tried to get back to the front of the net after the original shot but couldn't get control of either Jonathan Toews or Byfuglien.  On the fifth goal, he let Byfuglien get inside position and basically pushed him right into the goalie and the puck into the net.  Byfuglien, Byfuglien, Byfuglien.  The Canucks really miss Willie Mitchell.

Programming Note: I'm gone far away this weekend so the scoring chances for Games 4 and 5 both won't be up until Monday.