The time was ticking away.  They were in control at the end of the second period, a tie score immanent, but the time in the third period was ticking away without a trace of urgency.  Six minutes gone and nary a chance for either club, fine for the men in white since they were ahead by one but a disaster for the men in red.  And then a penalty, "too many men on the ice" of all things. Dammit Eager.

Maybe it was the sense that up a man they didn't need to worry so much about defence.  Maybe it was just a bad play like any other bad play and it just, kind of, happened.  Either way, the pinch to hold the line was a bust.  The one who pinched was standing in cement and the other one forgot how to skate backwards - truly unfortunate timing, you'd think that would be one of those things that never leaves you, like riding a bike - and the puck was in.  Tie game.

The Canucks were awake.  It was as though they'd simply been resting and the tie score was a signal to wake up. A few chances later Chicago takes another penalty.  And for the second time in a row, Chicago is the beneficiary.  Patrick Sharp is away again, another short-handed break.  I could feel in my bones that he was going to score.  The Hawks were going to come back from down a goal without registering a single chance at even strength or on the power play.  Chuckling to myself as Sharp breaks toward the net, my nascent giddiness implodes on itself when he misses.  Those bones never were reliable.  But this time the power play ends and Chicago is still in control.  A few minutes later they swoop down the ice in a pack and Vancouver is disorganized.  They look to shoot again and again but never pull the trigger until finally one is all alone, Luongo already down from the five or six - or was it fifty or sixty - attempts and looks that nearly made it on goal.  Versteeg takes his time and picks his shot and hits his spot.  Glory. 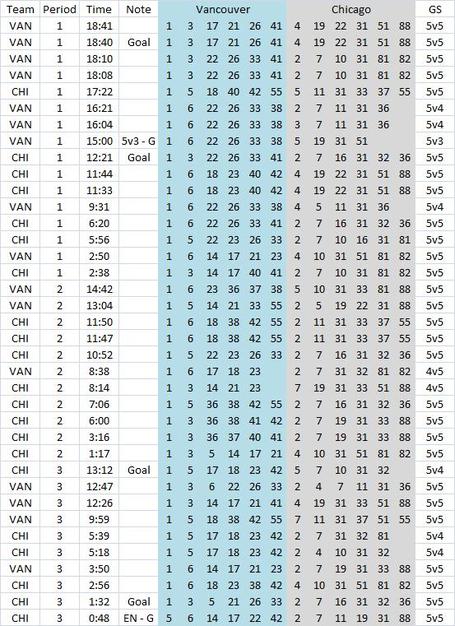 For the second game in a row, the Blackhawks showed up late, which was more worrying than it was frustrating.  Through the first five minutes the Canucks had amassed a 7-1 lead in scoring chances, the Blackhawks had taken two overlapping delay-of game penalties and the Canucks held a 2-0 lead where it matters most.  And then the Hawks showed up or the Canucks sat back or something.  Whatever it was, the Hawks out-chanced the Canucks 20-9 the rest of the way.  More please.  One odd thing about this game was that both teams ended up even in scoring chances 4-on-5.  The Canucks were up a man for 9:30 (plus 1:00 of 5-on-3), the Hawks for only 4:00 but both teams will be looking to their PP as an area for improvement when the series shifts to Vancouver. 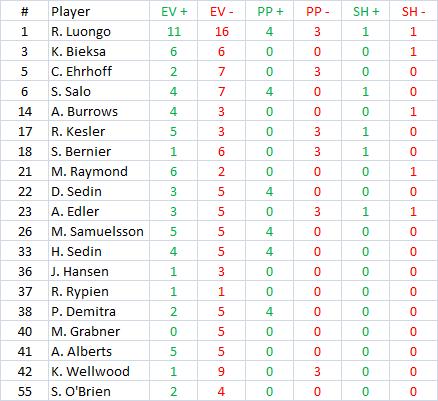 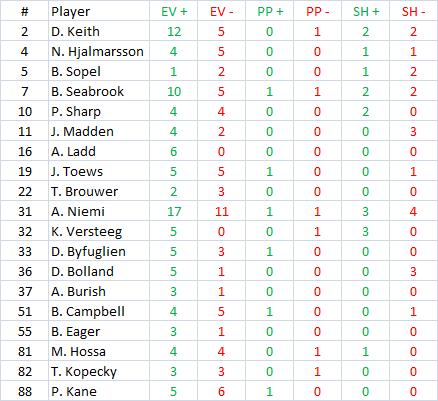 I really liked the adjustments that Joel Quenneville made to his lineup.  A bad too-many-men penalty aside the line of Ben Eager, Adam Burish and John Madden played a really good game against the depth of the Canucks.  Dustin Byfuglien started the game on defence and moved to forward when Quenneville decided that Troy Brouwer wasn't on his game which is a nice option to have.  If I were him, I'd be going with the same group back in Vancouver.  In terms of the players, Marian Hossa was much better in this one, but still wasn't as good as I was expecting.  Because of the depth Chicago has at forward Hossa is getting some easier match-ups and the expectation from me is dominance, not breaking even.

For Vancouver, a lot of guys had a rough game.  I almost felt sorry for Michael Grabner who played well in Game One and was rewarded with a bigger role in Game Two.  It didn't last long.  Demitra, Bernier and Wellwood sure didn't have a good game and the everyone in the top four on defence had some rough moments.  Alex Edler won't be getting a discussion below but he had significant troubles a couple of times.  In the second period he tried to hold the line but got beat which led to a Patrick Sharp break.  In the third the same thing happened to his partner on the tying goal and Edler couldn't get turned around to play the 2-on-1 which seemed to throw Luongo for a loop who played Sharp like he wouldn't have so much open space in the middle of the ice to go toward.  After the first five minutes, the Canucks really didn't play all that well.

Following in the Sins of Jeroboam son of Nebat

3. Shane O'Brien - This was a toss-up between O'Brien and Alexander Edler, which is a big problem for the Canucks because those guys are on two different defensive pairings.  I decided to go with O'Brien because he made some really poor strategic decisions in the second period.  Although they didn't end up in the back of the net, they very well could have.  There are a couple of plays that stand out.  One involved O'Brien darting into the Hawks' zone and then trying a drop pass.  Of course it didn't work and he was trapped while the Hawks moved the puck to Adam Burish who skated in on a break-away.  The second involved Kris Versteeg with the puck in the slot.  O'Brien began the play out of position and tried to recover by sliding to block Versteeg's shot.  But Versteeg held on as O'Brien went through the slot which allowed Versteeg to take a clear shot from a prime area.  When you're protecting a one-goal lead, those kinds of mistakes can be a real killer.

2. Henrik Sedin - He got nothing done at even strength and a similar nothing done on the power play for the last half of the game.  The last scoring chance he was on the ice for was with 13:04 left in the second period.  He was also one of the guys caught running around on the Hawks' winning goal - when the puck went in he was standing all alone at the far face-off dot covering nobody.  Like it or not, more is expected of the top players and he needs to be better.

Walking in the Ways of David son of Jesse

3. Brent Seabrook - He would definitely be higher on the list if it wasn't for that awful penalty in the first period.  Though I've got to admit that the penalty itself wasn't as bad as the explanation he gave in the intermission as he tried to explain that he didn't knock the net off on purpose.  Riiiiight.  Does he know that people can watch replays?  Anyway, other than that gaffe he played a fantastic game.  He and Duncan Keith were matched up against the Sedins and they came through big out-chancing them at EV and limiting their effectiveness on the power play.  Seabrook was also on the ice for all four Chicago goals and scored the first one himself on a nice pinch in from the point.  I can't get into the heads of the Blackhawks, but when I saw Seabrook score, I know that I sure felt a sense of relief and like things were getting back on track.  Whether the Hawks felt that way or not, that is in fact what happened.

2. Ryan Kesler - Kesler ended up -1 on the night but neither of his two minuses took place 5-on-5.  At 5-on-5 he was out there for about half of the time Patrick Kane and Jonathan Toews were on the ice.  And for a second straight game, the line of Kesler, Alex Burrows and Mason Raymond came through and out-chanced their competition.  They scored the first goal of the game when Kesler won the puck along the boards, moved it to the point and then crashed the net.  Kesler scooped a rebound toward the net and Raymond put the second one in.  It was a shift that characterized how that line has played so far this series - winning battles all over the ice.  Kesler was also lead the Canucks in ice time on a very successful PK.

1. Kris Versteeg - A whale of a game from him.  Of course, he scored the winning goal, and that's a pretty big moment in the game but it's not like that was all he did.  He also drove the net on Patrick Sharp's tying goal which seemed to confuse Alexander Edler and left Sharp to go one-on-one with Roberto Luongo.  Overall, Versteeg was +3 in terms of chances in his 2:00 of SH time.  That's pretty darn good.  For the rest of the game he and his usual linemates (Andrew Ladd and Dave Bolland) took on the Sedins and won.  No scoring chances against at EV while taking on the Sedins is damn impressive.  Putting five or six of your own on the board at the same time is just fantastic.  All three of these guys were fantastic.