Paul Coffey was unstoppable that spring of '85.

Coffey and his Edmonton Oilers were on a mission, to defend the Stanley Cup that they had won for the first time a year previous. In fact no fewer than eight Oilers - plus all three coaches - were pursuing an unprecedented triple, having participated in the Canada Cup, then the world's only best-on-best hockey tournament. To puck fans of the day it was the closest thing going to the modern, professional-era Olympics.

For Paul Coffey, Wayne Gretzky, Glenn Anderson, Charlie Huddy, Kevin Lowe, Mark Messier, Randy Gregg, and Grant Fuhr, the long season had begun at Canada Cup training camp on July 15 - less than two months after clinching that first Cup - and lasted right through until May 30, at the time a record for the latest NHL game. The first four of those played all 98 regular season and playoff games for those '84-85 Oilers, and some 116 games in all.

Already emerging as the game's preeminent offensive defenceman, Coffey had played a starring role in Canada Cup '84. He was the hero in the stirring overtime victory against the USSR in the semi-finals, turning the tide on one famous shift in which he broke up a 2-on-1, then led the charge up the ice and ultimately fired the shot that Mike Bossy tipped home for the game winner. Canada went on to win the final series against Sweden, wrapping things up right in Northlands Coliseum. The sweaters were different, the Cup looked different, but many of the players celebrating looked mighty familiar to us Oiler fans sitting in our regular seats.

Back in their familar white, blue and orange, the Oilers started defence of their title in style. They set an NHL record with a 15-game unbeaten streak to start the season, and rolled to a record of 43-12-6 by late February. Suddenly the team hit the doldrums, winning just 6 of their last 19, and blowing first place overall to the red-hot Philadelphia Flyers. As the postseason got underway, many people openly questioned whether the Oilers had shot their wad.

The playoffs got off to an uncertain start as the Oilers struggled to get their trademark offensive game going. Their three-game sweep of the Los Angeles Kings was a tense struggle indeed with two of the games going into overtime. The difference in the series was between the pipes, where Fuhr was named first star of all three games, and he followed with a fourth such outing in winning Game One against Winnipeg Jets. Then Paul Coffey started to roll, scoring 2 goals and 3 assists in a transcendent performance to lead Oilers to a 5-2 win in Game Two. The offensive machine roared back to life, pumping 13 goals past Jets' goalies in Winnipeg Arena to complete the four game sweep, then a mind-boggling 44 in a six-game beatdown of Chicago Blackhawks that still stands as the NHL record for goals in a playoff series. Jari Kurri led the way, setting still-standing records for goals (12) and hat tricks (3) in a playoff series.

Still, doubt remained as the Oilers prepared to take on Mike Keenan's white-hot Philadelphia Flyers in the Finals. The Flyers had won 16 of their last 17 to blow past the Oil for first overall, then rolled through three playoff series losing just 3 games. When they thumped the Oilers 4-1 in Game One at the Spectrum, there was plenty of cause for concern.

Crucially, the Oil gained the split with a 3-1 win in Game 2 with a solid defensive effort that limited the Flyers to 18 shots after 41 in the opener. By the rules of the day the next three games would be held out west, a formula the Oilers had followed with success in 1984 with a split in Long Island and a sweep at home. So it would play out again in '85. The 2-3-2 format had effectively become the 2-3 format, so the NHL promptly changed that rule after a two-year experiment. A very successful experiment from the perspective of Oiler fans.

The Oil took charge on their home ice. Gretzky produced a first-period hat trick in Game Three, all assisted by Coffey, then the two of them set up Mike Krushelnyski's game winner in a 4-3 win. Game Four saw the Oil erupt for four powerplay goals, the last two by Gretzky proving the difference in a 5-3 victory. In the process Pelle Lindbergh, the league's first superstar Euro goalie, had been driven from the net. So it was that on May 30, 25 years ago today, backup Bob Froese led the demoralized Flyers on to Coliseum ice against an Oiler squad that was determined to end the job that night.

The Oilers didn't disappoint, putting on a spectacular show in blowing out the Flyers 8-3. It was the third straight series that the Oil had put a snowman on the board in the final game, as their awesome speed and skill gradually wore down each opponent. The final game was a display of Oiler hockey at its most potent, with a series of gorgeous goals. 6 of the 8 were scored on the rush, the other 2 off of sustained pressure. The Oilers scored on spectacular solo rushes, on nifty three-way passing plays, on one-timers and on roof jobs. Froese had a tough night, but nonetheless made a number of fine stops to prevent the score from rolling up into double digits under a 41-shot barrage of mostly high-quality shots.

In the first period Gretzky made a great blind pass to set up Kurri for his 90th goal of the long season (regular plus playoffs), then in the second the Finn returned the favour with a great blind pass of his own which the Great One converted for his own 90th. In between times Coffey had scored a pair of goals, one the Stanley Cup winning goal, the other on this brilliant behind-the-back pass from Gretzky which provided the season's defining moment.

As an Oiler fan I'm biased -- especially given as I saw 10 of the games live (all wins) -- but I think it's a very defensible case that Paul Coffey put on the greatest playoff performance of any non-Conn Smythe Trophy winner in the award's 44-season history. For certain he played better than a lot of Smythe winners of other seasons. In the merely 18 playoff games it took his Oilers to defend their Stanley Cup in 1985, Coffey set playoff records of goals (12), assists (25), and of course points (37) by a D-man, breaking records of Bobby Orr and Denis Potvin IIRC. All 3 records still stand today as the likes of Al MacInnis and Brian Leetch fired and fell back in the numbers dept even as they garnered Smythe honours themselves. In the dead puck era, even the likes of Nicklas Lidstrom haven't come close.

Coffey was flying that whole spring. It wasn't that teams didn't try to stop him ... I still shudder to think of Jim Kyte's attempt to amputate Coffey's foot at the ankle with a diving slash as the Oiler speedster was flying past Winnipeg's resident goon. As the playoffs wore on he accumluated various aches and pains, with some six different injuries being documented. It seemed every game somebody would take a run at him, Coffey would go down and stay down and the arena would fall deathly silent. But a minute or two later he would clamber to his feet, and by the next shift there he would be winding up behind his own net with his wide powerful stride, preparing to blow down his preferred right side. Leading the rush or joining it late, he added a dimension to the Oilers' relentless attack that proved impossible to stop.

In the process Coffey came the closest of any Oiler during Gretzky's time here to achieve something close to equal billing as a mega-star in his own right. Besides his Canada Cup and Stanley Cup heroics he won the Norris Trophy that season, his first of three, and was widely considered the second best player in the game.

Coffey lost the Smythe to Wayne Gretzky at the height of his powers. Gretzky played superbly, setting his own still-extant record for points in a playoff season (47), yet his Smythe award was by no means unanimous as there was a tremendous amount of support and sympathy for Coffey. At the time the pundits were calling it the closest vote in history, although they've always been secretive about Smythe voting for some reason so I don't know if that statement is verifiable or just scuttlebutt. It was a real tough call whether you were basing it on numbers or actual play. Both were freakin' brilliant, night after night. That same spring Jari Kurri tied Reggie Leach's record for goals in a playoff season (19), another record that still stands, and Kurri was almost an afterthought in the Smythe discussion. Of course they all fed off each other. If any coattails were being ridden, they were Gretzky's, but those other guys were superstars by any mortal measure. Like the trio of Potvin, Trottier, and Bossy, the sum was even greater than the formidable parts.

Those formidable parts - plus Anderson, Messier, Huddy and the rest - summed out to 98 goals in just 18 games that playoff season, another (unrecognized!) NHL record that stands to this day. The Oilers were in the ascendant, with eight players who had pulled off the Stanley-Canada-Stanley Cup triple. Five of them would repeat that feat in 1987-88, while one other player, Pittsburgh's Larry Murphy, would do the same in 1991-92. Murphy's teammate Coffey meanwhile, would win both Cups in the same calendar year for yet a third time, the only man ever to accomplish this unlikely feat.

An odd moment that I remember clearly from that last game against the Flyers in '85 was a two-man advantage the Oilers got in the third period. Keenan's Flyers were gooning things up a bit, so Sather decided to throw the kitchen sink at them, icing a rarely-seen powerplay unit consisting of all of the Big Five as they tried to set up Kurri for a record 20th playoff goal. They didn't click at all; the first thing they did on that 5-on-3 was give up a breakaway to Dave Poulin that resulted in a penalty shot! After Fuhr stopped that, the Big Five fumbled around but didn't generate much; the game was in the bag, the champagne chillin' in the room, the longest season finally winding to a successful close. It would be my rare privilege to see a third major Cup presentation in the same building in under thirteen months!

Ever the historian, I distinctly recall what I said to my seatmates as Gretzky, Kurri, Messier, Anderson, Coffey and Fuhr took to the ice for that rare shift together, their second Stanley Cup in the bag and clearly more to come:

"Look! The odd numbers are all out there at once! Not often you get to see SIX HALL OF FAMERS on the ice for one team!"

Given the boys on the bus were all of 23 and 24 years old at the time, it was a bit of a bold statement. But what can I say? The proof is in the rafters. 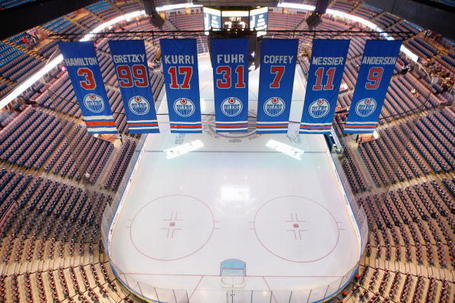