This game is full of both hope and disappointment for the Flyers and their fans.  They scored five goals.  They shut down Chicago's top scorers.  They didn't take any penalties.  They didn't get outshot.  They didn't get outchanced.  They lost.  Whoops.  That last one is a killer.  The bright side is that the Flyers have now shown that they can hang with Chicago at even strength, at least they did last night - though it's also true that the Blackhawks didn't have their best game - but that silver lining doesn't obscure the dark cloud that is a Game One loss and a huge opportunity missed.  It's very possible that Game One will end up being both Antti Niemi's worst game of the series and the most lopsided power play advantage for one team over another.  And yet they couldn't win.  It seems likely to me that there will be games where the Hawks are more dominant and only a sterling performance in goal will save the day.  Last night they just needed average.  Disappointing indeed.  Scoring chances and more after the jump. 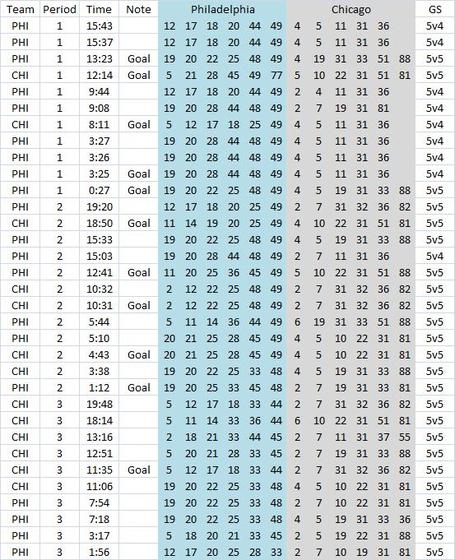 Philadelphia looks like they dominated the first period by the chance totals, but the vast majority of their advantage came on the power play.  On the other hand, the Blackhawks only had one ten-minute run of dominant play in the entire game.  Getting pasted with the score tied at the start of the third period is never a good thing but that ten-minute period of time is what I expected from larger chunks of the game.  Going into the third period, the Flyers had actually outchanced Chicago 6-1 at even strength with the score tied.  Now, in a game with so many goals, that's not exactly a large sample of time and by the end of the game it was 6-6 at EV with the score tied, but that's a far cry from the dominance I - and most others - were expecting. 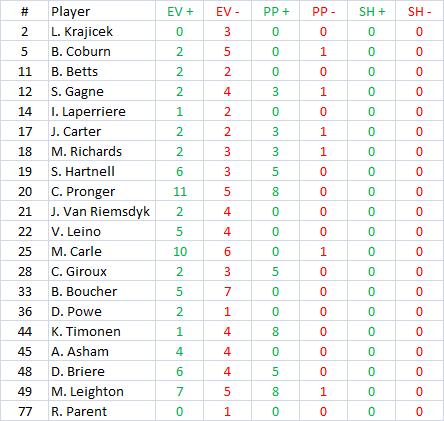 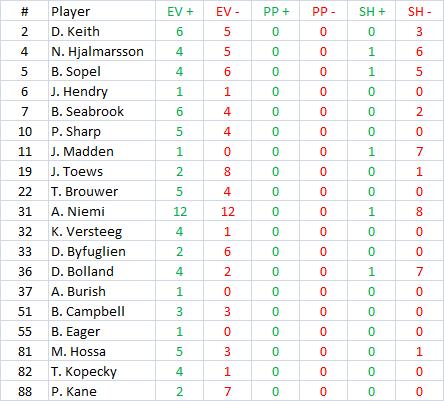 It turns out that Peter Laviolette decided to stick with his line of Mike Richards, Jeff Carter and Simon Gagne.  Predictably, Joel Quenneville decided to play Dave Bolland's line against them for most of the evening and it was Bolland's line coming out on top in Game One (Bolland was +2 -1 head to head against Richards).  This begs the question, "Will Derek allow a story complementing Bolland to be published?"  Seriously Derek, an impressive performance!  At even strength!  And he scored a shortie!  For the Flyers, the fourth line was much better than I thought they'd be, playing about seven minutes at even strength without getting killed.  The line was more sheltered than usual (6 OZ draws compared to 4 DZ draws, which is the opposite of their usual distribution) but that's to be expected playing against the Blackhawks on the road.  Overall, a good performance from them.  The other line to perform really well was Danny Briere's group who made up for Richards being outplayed.  They took the Toews' line out behind the barn for a whipping (Briere was +5 -1 head-to-head against Toews), a pretty darn impressive display.  Briere reminds me some of Brian Campbell in terms of how he's perceived.  People look at the player and see the contract which often causes them to overlook the fact that he's actually pretty good.

3. Danny Briere - I've pretty much established why I think he was fantastic.  By all rights, it should have been a performance that was good enough to win.  Not only did he prevent the Toews' line from doing much of anything, he scored a goal and had three assists.  That's an incredible performance against good players.

2. Troy Brouwer - I always kind of forget about this guy when I talk about his line.  But hey, he scored two goals tonight, and that's pretty darn good.  Coming into the series I thought that the Sharp line might be awfully tough for Claude Giroux and his crew to handle and that's how it worked out last night.  It wasn't a thoroughly dominant performance by Sharp's group, but I thought that the ice generally tilted the wrong way for Philly when this match-up came about.

1. Chris Pronger - The Philadelphia Flyers had 20 chances on the night.  Chris Pronger was on the ice for 19 of them.  With Pronger on the ice the Flyers outchanced Chicago at evens 11-5.  When he was on the bench they were outchanced 7-1.  Chris Pronger led all skaters on either team with a Corsi rating of +17.  The next closest player is the unguessable Ben Eager at +6.  Chris.  Fucking.  Pronger.  He's a damn good hockey player.

3. Patrick Kane - The team's gameplan is designed to provide cover for him and his line so getting outchanced 7-2 is even worse than it looks.  The Briere goal at the end of the second is a nice summation of Kane's work on this night.  A giveaway in the neutral zone followed by running around confused in the defensive zone until Danny Briere scores.  When he's going offensively, it's easier to overlook some defensive warts but when his offence isn't there and his line plays a lot in the defensive zone, it's ugly.

2. Antti Niemi - Let's not forget that this guy was pretty bad.  I'll give away number one on the list by saying he wasn't the worst goalie in the game but let's just say that he wasn't the best one either.  After a shaky start he just kept on looking shaky.  To his credit, no goals allowed in the third period.  But... there were only four chances against and three of them missed the net.  So... one difficult save to preserve the lead!  I guess that last bit is more of a condemnation of the Flyers than of Niemi.

1. Michael Leighton - You knew this was going to be a gong-show when he lost the wrister from the blueline about seven minutes in.  That puck didn't end up in the net, but the facepalm it induced was a sign of things to come.  He allowed five goals on six chances.  The only one he saved let out a rebound which was promptly put into the net.  On this night, he was the personification of failure.