The Best Forwards In The NHL - Tough Minutes Edition

Share All sharing options for: The Best Forwards In The NHL - Tough Minutes Edition

Last year, right before the season was complete, I took a look at the forwards in the NHL that were playing the tough minutes.  The entry's title, "The Best", has a double meaning:  first, it's meant to show which forwards are playing the best opponents possible; second, it's meant to show my belief that the best players in the NHL are the ones that are able to outscore the tough minutes.  For those unfamiliar with the quality of competition metric, please visit the always-educational Behind The Net Hockey and Gabriel Desjardins' FAQ on QualComp.

QualComp is important because it shows which forwards are playing the toughest minutes night in and night out.  These forwards are the men entrusted with not just shutting down the opposition, a phrase beloved by hockey fans and media, but outscoring the toughest competition, a phrase that should be much, much more important to hockey fans and hockey media.  Limiting the opposition's best in terms of chances is always a good idea, but the impact players, the players that bring true value to a team, are those that can outscore the opposition in any circumstance at even strength.

There are other factors that can bring context to the performance of these players, but the list that follows after the jump is a simple look at the forwards that have taken on the tough minutes for three consecutive years and their performance against that competition in a very narrow view:  even strength outscoring.  I'll add context in the coming weeks.

There are sixteen forwards that have played the tough minutes each of the last three years.  Broken out by position they are:

This is a select, though varied, group as Centers make up nine of the sixteen men on the list.  Twelve of the sixteen are first line players, traditionally known as "scoring line" players.  The specifics are in the chart below, broken out by scoring differential per fifteen even strength minutes, approximately the minutes per game of a top line forward. 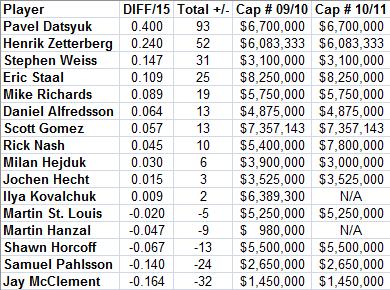 Out of the sixteen tough minutes forwards, eleven have been able to outscore their opponents over the last three years.  While there are a few bargains, this group is a very expensive one.

The above list raises a question.  If you knew that you could sign an NHL forward and had knowledge that he would outscore the tough minutes for three seasons in a row, how much would that forward be worth?  If you had the ability to see into the future, are these guys worth a contract near the cap?  Why or why not?  How much more valuable is player that isn't scoring goals, but is still beating the other team's best, like Scott Gomez than a player that is popping in 35 goals per year, but isn't playing the best compeition, like Jeff Carter?

In the article last year, I looked at forwards that had turned the trick two years running.  Here is that list: 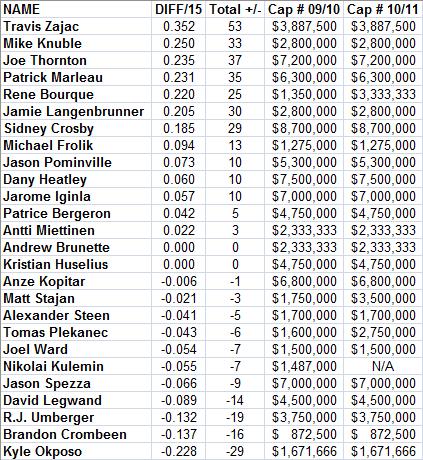