With the Oilers holding the first overall pick in this year's draft - and a couple more in the top fifty (big thanks to Montreal and Philadelphia for pushing that Nashville pick higher!) - I'm sure this series will be only the beginning of the beginning of our draft coverage.  But this series ends here.  After breaking up my analysis into three three-year segments (1997-1999; 2000-2002; 2003-2005), this article will bring all of that data together and look for some larger patterns over the entire nine-year period.  Let's take a look at the data after the jump.

Once again, here's the criteria I've been using to evaluate individual selections: 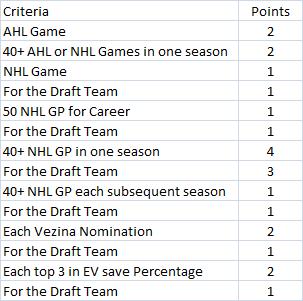 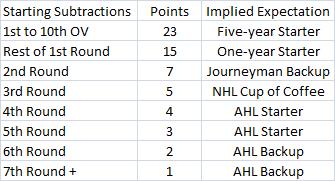 One thing that's been made quite clear in this series is that I'm not a believer in drafting goalies in the first round.  To illustrate that point, the following chart shows how each goalie drafted in the first round from 1997-2005 grades out: 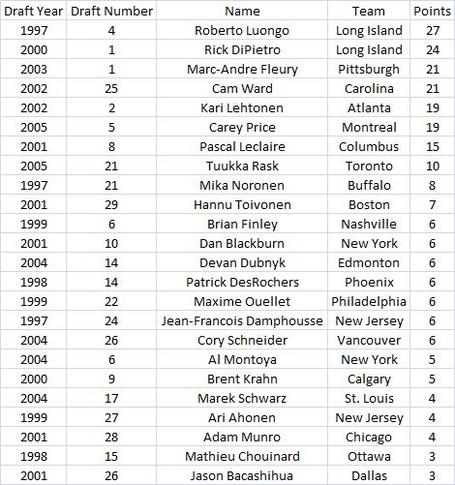 That's pretty busty.  Only eight of the twenty-four goaltenders selected in the first round have managed to start at least forty NHL games in any one season.    And that ratio looks worse when you take out all of the goalies selected in the top five picks.  Those five top five picks have done well which is pretty darn important considering they're, you know, top five picks.  But is pretty well good enough?  would you rather have Eric Staal or Marc-Andre Fleury?  Jay Bouwmeester or Kari Lehtonen?  Dany Heatley or Rick DiPietro?  Gilbert Brule or Carey Price?  Erm... exception to the rule!  Roberto Luongo or... okay, so it's not like it's always a bad choice to go with the goalie.  As for the rest of the first round... yikes.  That's scary stuff.  But how does this 6th-30th segment of the draft compare to the later rounds?  Excellent question!  Time for another chart, this time to show the number of selections, the number of "successes" (i.e. at least one season starting forty or more NHL games) and the number of "failures" (i.e. everybody else) in each round of the draft from 1997-2005: 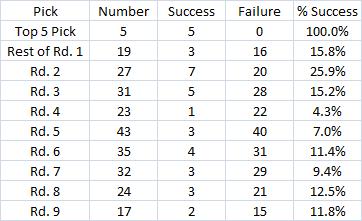 On the bright side for teams drafting goalies in the first round from 2006-2009, the lack of success from 1997-2005 is probably somewhat unlucky.  There's no reason to believe that goalies taken in the second round should perform better over a larger sample and I'm confident that we would see the chart smooth out if we added more draft seasons.  Taking all goalies drafted in rows three and four, the success rate is at 21.7% over these nine years.  From rounds three to nine, the success rate is at 10.1% which means you would need to make nine picks from the 3rd round to the 9th round (well, 7th round now) in order to have the same odds of picking one "success" as just one pick in the first two rounds.  In a forthcoming article, I'll explain further why I think the "lots-late" approach is better.  For now, I'll outline two reasons very briefly.  The first is that the rate of success for quality forwards and defenders in the early rounds of the draft is much better than goalies (this is what needs to be established with data and will be the subject of the forthcoming article).  The second is that all of these successes aren't created equal.  Jeff Deslauriers, for instance, is considered a success.  That's wrong.  Very wrong.  so who are the real successes?  It's an important question, and I'll circle back to it, but before looking at those, let's first outline all of the marginal successes drafted from 1997-2005: 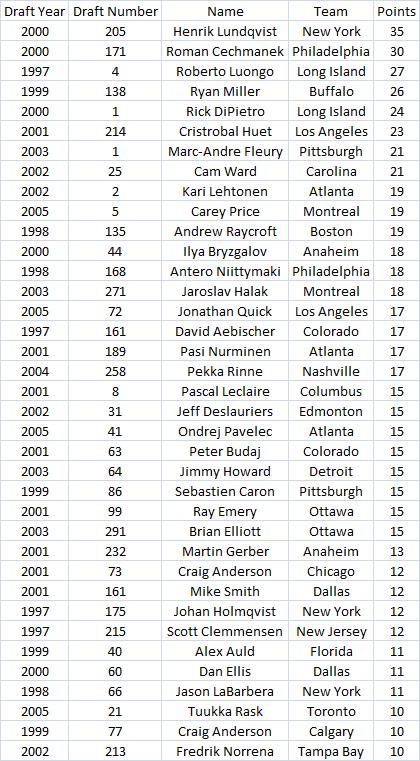 All of these players have provided some non-trivial value at the NHL level, but, as I said before, many of them probably shouldn't be considered a "success" since they really aren't worth drafting.  What's the point of drafting Alex Auld or Scott Clemmensen when you can go out and sign an equivalent player as an unrestricted free agent every summer at very little cost?  In order to set some kind of objective criteria, let's look at the players on the list  with twenty points or more and add a few that I think have a very good chance at getting there: 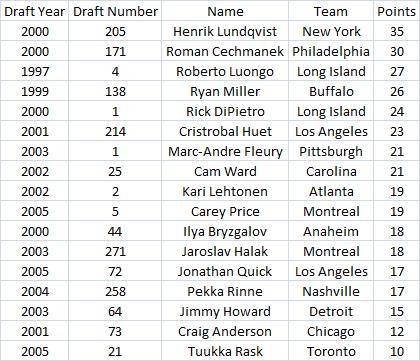 It's my view that these are the guys worth drafting, players that are hard to acquire via free agency cheaply and who will contribute many wins at low cost during the early part of their careers.  There are seventeen of these high value picks.  Five were top five picks, four others were later first rounders or taken in the second round, three more later in the top one hundred selections and a final six from outside of the top one hundred.  The teams with the best success rate here, in my opinion, are the Los Angeles Kings and Montreal Canadiens so, preliminarily, I'd say they likely deserve the best overall scores for this period.  Here's how the list actually stacks up: 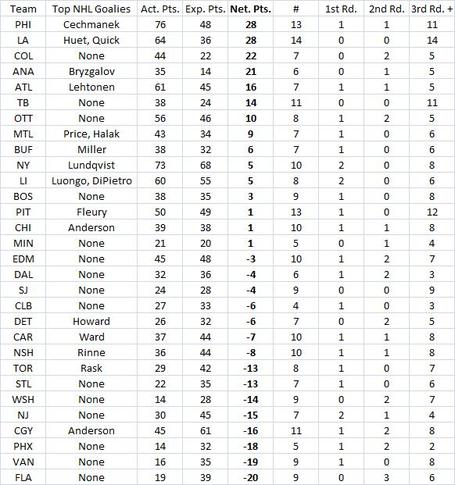 It turns out that both Montreal and Los Angeles end up in the top ten but both of them lose out to the Philadelphia Flyers who amassed a ridiculous number of points through the selection of Roman Cechmanek.  It's an important point as we look forward that, under today's CBA, Roman Cechmanek (and Cristobal Huet) wouldn't be drafted at all.  Instead, they would be signed as unrestricted free agents.  Examples of this kind of player are Jonas Hiller and Antti Niemi.  In my opinion, this free acquisition of young talent (especially Europeans but also NCAA and CHL free agents) ought to be the primary means of bringing in new goaltenders rather than expending resources in the draft.  If draft resources are used, the tactic of taking a "Flyer" late (I can use it as a pun now!) would be my preference.