Shot Quality vs. Quantity I - the winning formula(e)

Share All sharing options for: Shot Quality vs. Quantity I - the winning formula(e)

I'm a bit of a slow learner, so it may be that I don't quite understand this debate between shot quality and quantity. I have always thought that a real good team lives out in the margins of both, that it will both outshoot its opposition over time, and also win the percentages battle by making more of its shots count. Yet I keep (mis?)reading that it's really all about the shots, and shooting percentages, while important, are largely driven by luck and will eventually regress to the mean. They're best considered some sort of quantum variable which are largely subject to the whims and whimsy of the hockey gods.

OK, maybe I overstate a little. But I think it's fair to say that shot rates are considered more sustainable over time than those fickle percentages. Why look at the poster boys in Detroit, who are heavy outshooters to the point that if they simply shoot and save at around the league average rates they're in the hunt for the President's Trophy. Obviously that's the way it should be done. Everybody should follow the Detroit Model!

But was it ever thus? I cut my statistical teeth on Oiler Hockey, where the team was happy to trade chances and kill you by execution (so to speak), which they did in a sustainable manner for years on end. So I'm biased to see things the other way.

The NHL has Shots For data dating way back, but officially starting keeping Save Percentages in 1983-84, by coincidence the year of Oilers' first Cup. What does the historical record tell us? Luckily, rather than get into what appeared to be a real chore of collating data readily available in small chunks on hockey-reference.com, I had the happy thought of asking Gabe Desjardins if he had such data readily compiled. Seven minutes later - I'm not making this up - a huge file was in my inbox, with team data dating back to 1967, though with a four-year gap just after the merger. Thanks Gabe! I focused on the post 1983 data, 25 full seasons through 2008-09. I also focused on just real goals, so I weeded out all shootout data which would otherwise skew the data - every shootout effectively yields one goal on zero shots, the sort of equation which is seemingly possible in Gary Bettman's universe but not in mine.

My first approach was to get the data on a level playing field. I determined to express both shots and percentages as ratios, for to against. On the one hand this is easily enough determined from SF : SA. On the percentages side the popular stat is PDO, which is simply the sum of Sh% + Sv%. I love PDO, it's one of my favourite stats, but it is limited somewhat by its additive nature: e.g. a Sh% of 15% and a Sv% of .900 adds up to the same PDO of 1.05 as would a fictive team with a Sh% of 5% and a Sv% of 1.000. Only one of these teams is unbeatable. :) Whereas a ratio of Sh% over opposition Sh% would yield a percentage expressed not in shots, but in goals. It would also better account for era effects than does PDO, whose range has shrunken considerably in the Dead Puck Era. Not surprising when you realize that league wide Sh% has rolled back from ~12% to 9% over the past quarter century. The margins are narrower, but they are still all-important. Moreover, they seem to be sustainable, at least by truly great teams of the recent past if not the present.

The other nifty thing about this shooting percentages ratio - which I am cautiously dubbing the C&B number but will accept suggestions - is that it fits nicely in this equation:

Teams that excel in that latter category tend to do well in the standings and in the playoffs, whatever their particular formula for success is. More on these in graphic form after the jump. 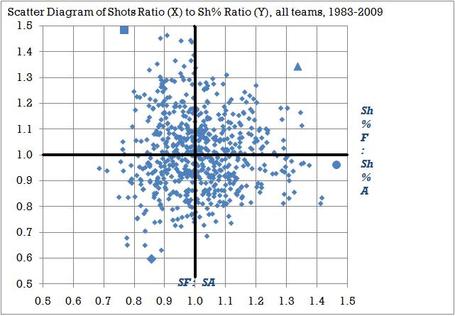 First of all, let's check out tendencies on a league-wide basis. The first result is a scattergram of all 639 team-seasons in the period under review, showing shots ratios on the horizontal axis and percentage ratios on the vertical. Immediately striking is that the range is very, very similar on both axes, neither data set appears to be "squashed" by a narrower range of possibility. To my eye this thing is as regular as a globular cluster.

Turns out the range of ratios is a tiny bit greater on the percentage meter than it is on the shot clock, but there is little to choose. Check out the fit of these paired Bell curves: 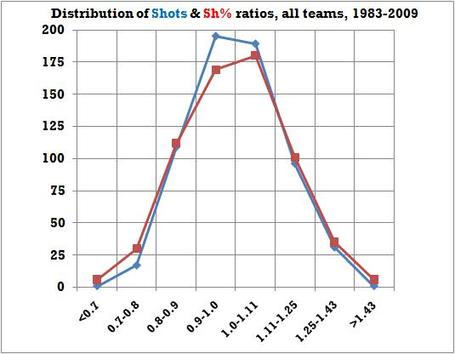 Isn't that a beauty? The shots ratio is a little higher at the centre of the Bell curve and a little flatter on the edges: just one example each of a club with less than 7:10 or more than 10:7, whereas the percentages model featured 6 examples of each. The standard deviations are .13 for shots and .15 for percentages. So I would have to say that very nicely supports my original hypothesis that the two aspects of scoring, shot volume and shooting/saving efficiency, are about equally as important in their contribution to a team's outcomes. I had thought it was pretty balanced, but I am pleasantly surprised it's this close. It's two completely different metrics, but for all intents and purposes X = Y! (Important note: this is on the scale of one season. In smaller samples, certainly within individual games or series, percentages fluctuate more than shots.)

Outliers are always interesting, so I featured one in each quadrant in the initial scattergram. The larger diamond on the lower left is the 1992-93 Ottawa Senators, an expansion team that was one of the worst clubs in history (10-70-4, +202/-395). They were only outshot by about 15%, but converted their shots at a rate less than 60% (!) that of their opponents. All of the smaller diamonds anywhere near them in the lower left quadrant are other expansion clubs.

In the top left the big square is the Buffalo Sabres of 1997. Buffalo had The Dominator, but the Sabres were The Dominated on the shot clock, outshot by nearly 4:3. However, thanks largely to their Hart Trophy-winning goaltender, their conversion rates were nearly 3:2, almost 50% better than their opponents, resulting in a team that scored 29 more goals than it allowed, finishing 10 games over .500. I consider it the greatest season of NHL goaltending in my lifetime.

The pyramid all by itself in the top right represents by far the best regular season team of this 25-year period, the 1995-96 Detroit Red Wings who both outshot and outfinished their opponents by 34%. The best of both possible worlds. The result was an outscoring rate of 180%, +325/-181. Those Wings set an NHL record by winning 62 games and finished with 131 points, 7 clear of any other team over the past quarter century. Surprisingly, they fell in the playoffs, ruining what had been a phenomenal season.

Finally, the big circle on the extreme right just below the breakeven line is a different Wings powerhouse, that of 2007-08. Those Wings were very extreme outshooters, an average of 34-23 per game, an edge so significant that they didn't even need to hit the league average in Sh% or Sv%, they just needed to be in the neighbourhood. While some hold Detroit's style of play from that era up as a model, fact is they were an extreme outlier that didn't come close to being duplicated in any of the other 638 seasons under study here. The Detroit Model worked for Detroit.

Here's what worked for others. This scattergram is reduced to just the 25 Stanley Cup champions during the period under study: 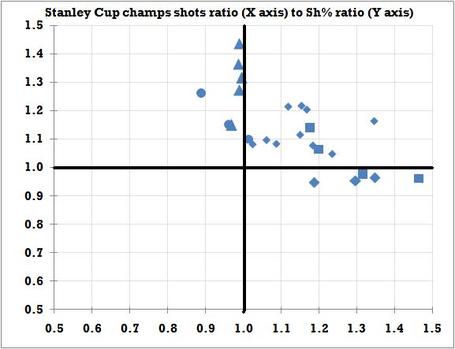 It is important to note that these are regular season results, so do not necessarily reflect how a given team performed in the playoffs. (I'll be comparing apples with apples and looking strictly at playoff data later in this series) Still, there are some obvious patterns here. The rank and file teams with one or two Cups each are all somewhere in the upper right quadrant, better than average in both departments. The Oilers are the five pyramids at upper centre, all just less than even on the shot clock, but all phenomenal on the conversion rate. The three circles in that general area are the Pittsburgh Penguins, who used a similar plan of offensive firepower finishing its chances at a very high rate. Meanwhile, the five Cup winners who were big outshooters and not so hot on percentages, were all either Detroit (squares) or New Jersey (large diamonds).

Here is that same information laid out chronologically:

(Click for better resolution) In this case I have added a green line indicating GF:GA ratio, which you will recall is simply the product of the other two rates. I note that 25 out of 25 Cup winners had an outscoring rate of at least 110% during the season, a trend that holds true for many years prior as well. This is one trend the Philadelphia Flyers (< 105%) are trying to buck in 2010, but history records that the long shot finalist is typically the losing finalist.

Interesting to note that a bare majority, 13 of the 25 clubs, were better than average in both categories, with 12 "exceptions" that were below average in one category but exceptional in the other, all coming from the era's four most successful teams. 13 of the 25 clubs were better in the percentage category, 12 in the shots department. Collectively the 25 champions outshot their opponents by 12%, and outconverted them by 13%. There seems to be a fine balance at play here, one we'll examine further in subsequent posts in the coming weeks.