Share All sharing options for: Flyers and Canadiens - Series Review

I'm already looking forward to the Stanley Cup Finals but before moving forward I thought it would be worthwhile to look back and evaluate what happened in the Eastern Conference Finals. The Canadiens lost, obviously, and yet it was their best series of the playoffs in terms of carrying the play. So what went wrong? Well, firstly, even though this was the best they'd done at controlling the play, they still didn't actually get the majority of the chances. So better still wasn't good. Secondly, Jaroslav Halak's .883 save percentage (what a choke artist!) and Montreal's 5.0 shooting percentage (how UNclutch!) would likely have been too much to overcome regardless. Scoring chances and analysis after the jump.

I'll start by giving the links to each game in case you want to be reminded of any particular contest when looking at the series totals:

For those who'd like a definition: a scoring chance is defined as a clear play directed toward the opposing net from a dangerous scoring area - loosely defined as the top of the circle in and inside the faceoff dots, though sometimes slightly more generous than that depending on the amount of immediately-preceding puck movement or screens in front of the net. Blocked shots are generally not included but missed shots are. A player is awarded a scoring chance anytime he is on the ice and someone from either team has a chance to score. He is awarded a "chance for" if someone on his team has a chance to score and a "chance against" if the opposing team has a chance to score. And, of course, a big thanks to Vic Ferrari for making the whole damn thing possible with his awesome scripts.

The totals make the series look very close - Montreal is actually ahead at even strength - but this is somewhat misleading. The Flyers outchanced Montreal in all four of their wins and those four games taken together give Philadelphia a 75-55 lead in chances overall and a 52-42 lead at even strength. The Canadiens were legitimately fantastic in Game Three but you don't win a seven-game series by being the better team once.

But that doesn't mean that the Canadiens played poorly throughout in the other four games. In fact, they often started the games wonderfully. Unfortunately for Montreal, they weren't able to capitalize on their chances in the first period as, despite a hefty 39-24 lead in overall chances, both teams scored three goals in first periods. Given Montreal's success against the Penguins and Capitals when leading, a few more early leads against the Flyers could have made a big difference.

The second period was the reverse of the first in terms of chances. For whatever reason, Montreal's strong play in first periods did not continue into the second periods where Philadelphia was clearly the better team. And, unlike Montreal, Philadelphia turned this big advantage in chances into goals, outscoring Montreal eight to one in the second period over these five games. I think it's clear that the Flyers were the better team in their four wins but it needs to be acknowledged that they were quite lucky in that Montreal couldn't bury chances early and that they capitalized on their chances so frequently. 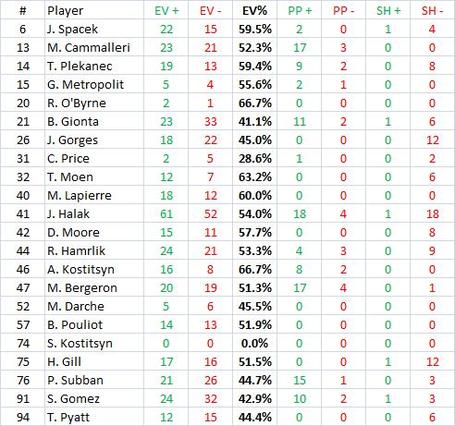 Having established that Montreal was - very much unlike their first two series - somewhat unlucky against the Flyers, it's now time for the fun part: finger-pointing. The first finger to be pointed is without a doubt going in the direction of the Montreal power play. The Canadiens ended the series with a chance differential of +15 in 36:05 of power play time compared to the Flyers' differential of +19 in 35:00. The difference there is small but significant. Based on my experience, one extra chance every two minutes should be an absolute minimum and the Canadiens miss that target by three. The Flyers only make the minimum by two but I didn't notice the Flyers PP stalling as much, largely because the Flyers made more of their chances. Philadelphia's goal differential on the power play was +4 (+4 -0); Montreal was "even" (+1 -1) and that gap in results will have a big influence on one's (well, mine at least) perception. As for Montreal's one goal, it came on a 5v3 at the very end of Game 3 against the vaunted PK unit of Ryan Parent, Lukas Krajicek and Andreas Nodl to make the score 5-1. Thus, the Canadiens didn't score a meaningful power play goal in the entire series. Even though I know that some of the difference in results between the Flyers and Canadiens is probably luck, I nonetheless feel confident in saying that Montreal's power play stunk.

With only one hand left for finger-pointing, I've thought long and hard and decided that my second finger ought to be moving in the direction the of Scott Gomez and Brian Gionta. They were often paired together on a line, sometimes with Travis Moen, sometimes with Tom Pyatt, sometimes with Benoit Pouliot (two games!) and sometimes with Mathieu Darche. Jacques Martin was looking for something positive from these guys. Nothing worked. I singled Gomez out as having a particularly bad game in Games Two, Four and Five (and Gionta in only Game Four) so it's not like they were getting beaten up on chances but looking good. Of Montreal's top three lines, this was by far their worst at even strength, they took several bad penalties and their "contribution" on the power play wasn't what a Habs' fan might have hoped for. It's one thing to have your depth get outplayed in a series, but to have the guys you're counting on get outplayed consistently is tough to take. 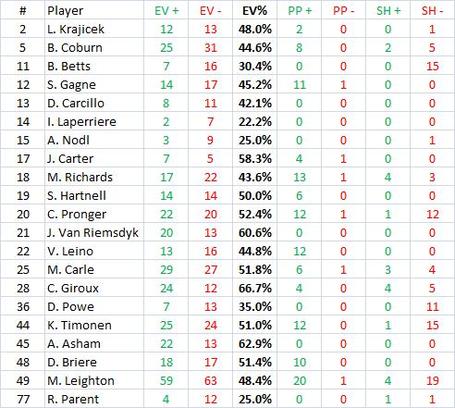 A lot of these numbers look pretty ugly because of that one awful game. Mike Richards, for instance, was +2 -7 in Game Three and +15 -15 in the other four. Still, that one bad game did happen. Richards is being lauded for his play in this series but that's probably because he was legitimately incredible in Game Five. The rest of the series? Meh. Against the Hawks, he'll need to play the way he did in Game Five every shift of every game. I don't know for sure who he'll be matched against in the Finals but if his line with Simon Gagne and Jeff Carter stays in tact, I strongly suspect Joel Quennville will be using Dave Bolland, Kris Versteeg, Andrew Ladd, Duncan Keith and Brent Seabrook against them. If the Flyers are going to win the Cup, they desperately need to win that match-up.

Some of the guys who don't look ugly on this chart are the top four defenders. The Flyers relied on their top four guys throughout and all four of them generally played well. I thought that Kimmo Timonen was their best defender throughout the series but Chris Pronger, Matt Carle and Braydon Coburn (in that order) all played well. Part of the reason was Montreal's more passive style which played right into the hands of a team icing basically four defenders (come to think of it, Boston and New Jersey are pretty passive teams as well). All four of these guys had time to rest on the ice because they weren't constantly under pressure. It will be interesting to see how the group holds up against a much more aggressive Chicago attack.

Finally, I need to say something about Claude Giroux. He, Arron Asham and James van Riemsdyk were simply amazing in this series. They did get an awful lot of offensive zone starts which no doubt helped to push those numbers higher but the numbers are still pretty unreal. If they get managed in a similar way against the Blackhawks, they'll probably end up being matched against Marian Hossa and Patrick Sharp with the odd shift against Chicago's fourth line. It will be a really good test and, honestly, they might get creamed (by the Hossa group, not the fourth line), but after watching this series, I'm convinced that they have a chance. I can hardly wait for Saturday!