It's an odd game that has the score close to the third period and yet has an emotionally anticlimactic final frame.  But that's exactly the way it felt - at least through my computer - in Philadelphia.  The second period began with the score tied at one and immediately, the home team was charging forward.  Not yet four minutes in, the Flyers took the lead.  Ninety seconds later, the bulge was two and the party was on.  The building reverberated with shouts of joy, with cheers for their heroes and with the mocking - but mostly it's just fun to do - Ole! Ole! taken from Montreal who took it themselves from the beautiful game.  And what could be more beautiful than two quick goals and an entire period in which the Canadiens never once looked dangerous?

The third period was devoid of that extended joy.  The building was excited, but nervously so, especially after the Canadiens scored and especially when Chris Pronger headed to the penalty box for four minutes.  Even once that penalty was killed, no harm done, there was not so much joy as a very small helping of relief.  Twenty thousand fists remained clenched until Jeff Carter finally put the puck into the empty net with twenty seconds to go and everyone could release.  But there were only twenty seconds to celebrate before the final whistle blew and by the time everyone had finished breathing out, it was over. 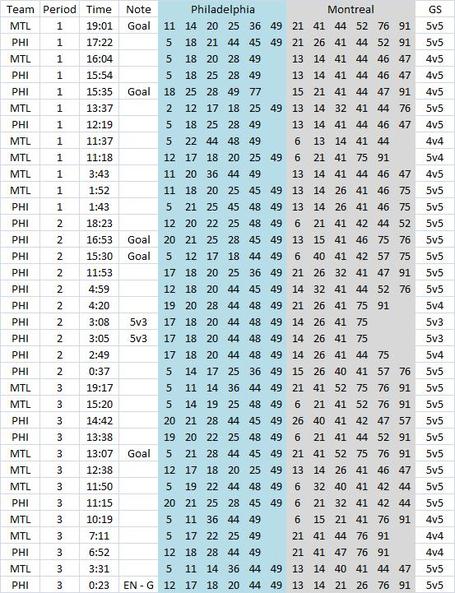 It seems that for the second game in a row, Olivier is too depressed to write about scoring chances.  Yesterday was also in the 20s all day in Montreal, so it's quite possible Olivier gave up on this sad-sack crew and enjoyed the sunshine instead.   If he does end up putting up his rendition of the scoring chances for this game, I'll update this section accordingly.

Olivier (En Attendant Les Nordiques) is back and this time the two of us have similar totals, though still several chances that were scored differently.  I had the Flyers winning on total chances 20-15 while Olivier had them winning 19-15.  But, of the 35 chances I scored, we actually only had 30 chances with Philadelphia winning 17-13 in terms of our shared total.  The Cohen Kappa Test that Vic set up for us comes in with a correlation of 0.75 which is a slight recovery from Game Three.  In the end, each of the four games we both scored was between 0.70 and 0.79. My "unique" chances were as follows:

I've already said it above but it bears repeating.  Montreal was really let down by their play in the second period and by the ineffectiveness of their power play.  The power play had been a problem for the Canadiens all series but this game took the depravity to a new low: three chances against, a short-handed goal and two minor penalties in just under ten minutes of power play time is truly pathetic.  But even with the horrendous power play, the Canadiens would have still probably had enough to win the game if they hadn't fallen apart in the second frame.  Hockey is a mysterious game sometimes.  How do you explain one team being superior for the first and third but drowning in the second?  I really don't know. 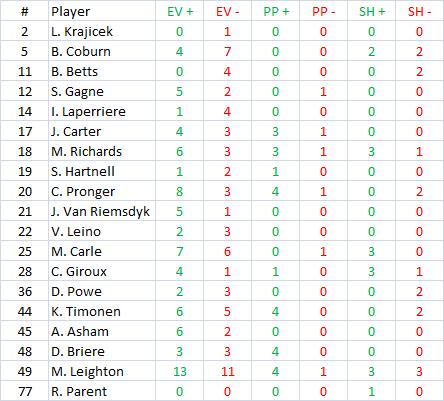 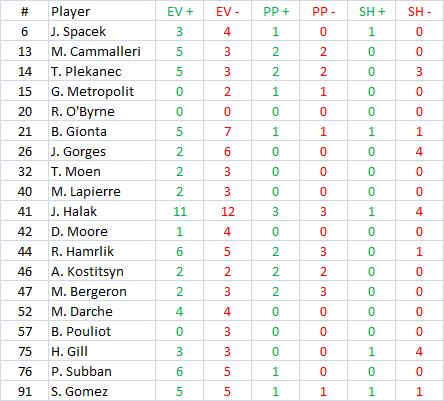 Many of the Canadiens actually played quite well at even strength but I just can't bring myself to praise them too highly since all of those that did were also part of the putrid power play.  P.K. Subban, for instance, had a mammoth +15 Corsi at even strength (the next best on either team was Mike Cammalleri's +9) but ended the night with only one chance on the power play in over six minutes of ice time.  Players like Scott Gomez and Brian Gionta who had struggled mightily in Game Four were much better at even strength in Game Five but were complete non-factors on the PP.  In fact, both were on the ice for Philadelphia's short-handed goal and ended the night -1 in PP goal differential.  As a team, the Canadiens ended the series having played 36:05 on the power play and a goal differential of "even" (+1 -1).  Their only power play goal came on a 5v3 at the very end of Game 3 against the vaunted PK unit of Ryan Parent, Lukas Krajicek and Andreas Nodl and made the score 5-1.  In other words, the Canadiens didn't score a meaningful power play goal in the series.

3. Jeff Carter - Two goals on the night, the first of which was on a great shot from the slot to beat Jaroslav Halak.  Carter is coming off an injury and is already playing in the deep end with linemates Simon Gagne and Mike Richards.  Carter's top four forward opponents in this game were Brian Gionta, Scott Gomez, Mike Cammalleri and Tomas Plekanec.  I, for one, have been very impressed by the quality of play Carter has managed on what is surely a still-injured foot.

2. Claude Giroux - I really like this player.  In almost five minutes on the PK he ended up +2 in terms of chances and +1 in terms of goal differential.  To set up the tying goal Giroux came all the way into the corner to pick up a loose puck and send it softly down the ice.  He probably didn't think that Richards would get there first, but the play was nonetheless emblematic of the Flyers' PK overall: aggressive.  Whenever there was a loose puck, the Flyers went after it aggressively and worried less about maintaining a proper box.

1. Mike Richards - He plays the game hard was physically dominant on a number of different occasions.  On the first goal Richards was everywhere.  He went out to the point and steamrolled over Marc-Andre Bergeron before skating up the ice on a three-on-two.  After the Flyers missed, he raced back and got a stick on two consecutive Montreal puck-carriers before moving high in the defensive zone, noticing that Giroux had moved low.  When Giroux put the puck out of the zone, Richards won the race to the puck by diving to push it forward.  He then got up and had enough time to put it into the net.  Wow.  A fantastic game from a fantastic player.

3. Hal Gill - This was not Hal Gill's best game.  At about 1:50 of the first period Gill tried to keep the puck in at the blue-line, missed, and then wasn't able to contain Arron Asham who ended up with breakaway.  That time, Halak bailed him out.  In the second period, Gill wasn't so lucky.  This time, he simply forgot about Asham as the Canadiens tried to break out of the zone.  Matt Carle kept the puck in at the line and fed Asham all alone in front of the net.  This time, Asham put the puck away to give the Flyers the lead.

2. Glen Metropolit - It's obviously not his fault that he played over four minutes on the power play but, my oh my, what a bad choice that is.  I know he's been doing it all season but that, frankly, doesn't make the decision any better.  His shot rate on the PP was the worst of the regular Canadiens' forwards and a quick look at his offensive resume (his career high in points is 33) should let you know this is a bad idea.  Unsurprisingly, he was a non-factor on the PP... well, except for losing the battle in the offensive zone corner that led to the puck being cleared for Mike Richards and for that offensive zone tripping penalty he took in the third period with Pronger in the box.  But other than that, non-factor.

1. Marc-Andre Bergeron - That first goal is almost entirely on him.  He is either one of the slowest players in the league or that was one hell of a lazy shift.  After getting run over by Richards initially, he was too slow to get back and pick up the third high man, allowing Philadelphia to get a good scoring chance.  On the actual scoring play he basically stopped skating for a couple of seconds to watch the collision between Richards, Roman Hamrlik and Jaroslav Halak.  Once he saw Richards had the puck, it was too late.  Had he just skated back hard, he would have no doubt been able to get to the loose puck before Richards and prevent the goal.  Setting that play aside, Bergeron also killed Montreal's second power play by taking a penalty of his own about half-way through.  A truly "special" game from the power play specialist.