Montreal had played well in the first period in each of the first three games and as the first period started, it certainly looked like that trend would continue.  The puck was always in Philadelphia's zone but after five minutes the chances read 0-0.  Shots getting blocked, shots from bad areas, zone time but no clear possession.  The trend continued unabated through the first half of the period and by the time Marc-Andre Bergeron took a penalty about eleven and a half minutes into the game Montreal led on chances by a paltry 1-0 margin despite a 13-5 advantage in Corsi.  At that point, penalty be damned, Montreal looked like they had come to play.  But when Bergeron got out of the penalty box, Montreal had lost its groove.  Over the rest of the period - all at even strength - I had the Flyers outchancing the Canadiens 4-1 and they led in Corsi 7-4.  If you watched the game, you know that things did not improve in the second.  Scoring chances and more after the jump. 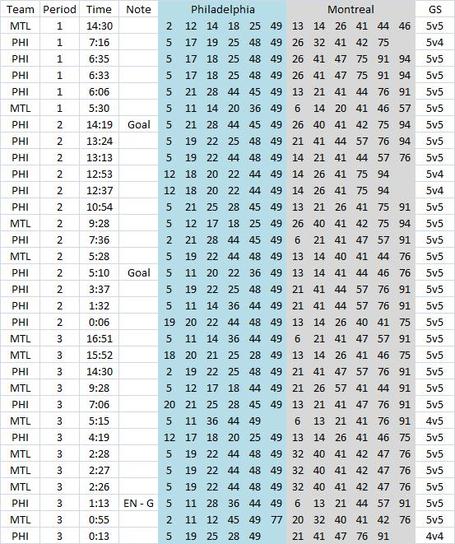 Olivier didn't have his rendition of the scoring chances up quite yet so I'll update this section with a comparison between how the two of us scored the game when his goes up.  It's a long weekend so I guess I can forgive him.  Maybe.

I've already discussed the first period in detail but suffice to say the 4-2 Philadelphia total was pretty lucky for the Flyers.  But after the first intermission it was all Philadelphia.  If you were inclined to spin that period positively you could truthfully say that  Montreal generated twice as many chances as they did shots on goal in the period.  Not that missing the net on your only scoring chances is all that positive.  In the third period, the Flyers were playing to the score and that kind of sort of almost let Montreal back into the game.  But not really. 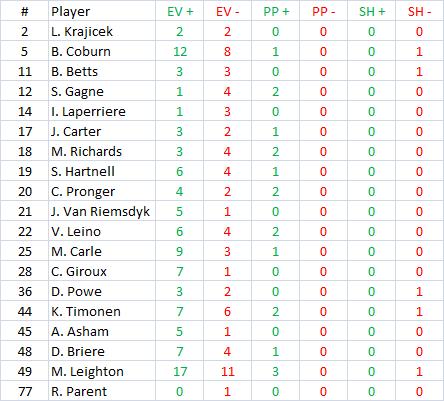 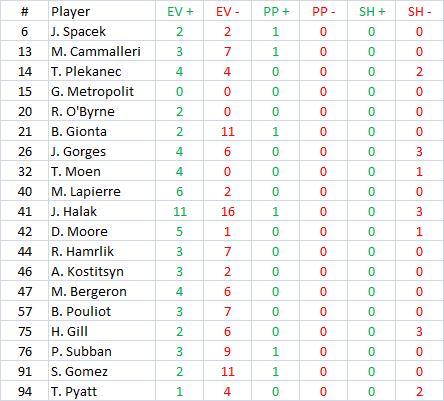 Unlike the first three games, special teams weren't much of a factor in this game.  There weren't many penalties and neither team was able to muster all that much offence when they did get a chance.  The Canadiens lost decisively, so they won't be mentioned below but the line of Maxim Lapierre and Dominic Moore - this time with Travis Moen - was outstanding for the second straight game both territorially and in terms of the scoring chances.  Now if only Montreal could get good play consistently from their best forwards, they'd be in business.

Those Born of God

3.  Michael Leighton - The last time I remember a goaltender pitching three shut-outs in one series was J-S Giguere in Anaheim's first run to the finals in franchise history.  I certainly don't expect to him to have Giguere's sills in goal but three shut-outs in four games is still awfully impressive.

2. Braydon Coburn - Coburn logged more ice time than any player on either team with the exception of Chris Pronger.  Coburn was the only Flyer on the ice for all three goals which is fitting because he was making things happen all night and doing so on both sides of the puck against several of Montreal's best players.  Now, Laviolette was pretty lackadaisical when it came to matching defensive pairings in systematic fashion but Coburn did have more ice time against Gionta, Cammalleri and Gomez than any other Montreal forwards.  The one play that really stuck out to me came early in the second period with the score tied.  Coburn was the only man back on a two-on-one and he calmly broke up the play eliminating any kind of scoring chance.  Good to see Coburn bounce back after a poor outing in Game Three.

1. Claude Giroux - He led the team in scoring chance differential (+6) and Fenwick (+5) so it's pretty safe to conclude that the puck was in the right place with Giroux on the ice.  But what really caught the eye was the amazing high flick on the breakaway chance that put the Flyers in the lead.  Amazing hands.

Those Committing the Sin That Leads to Death

3. Josh Gorges - I think "posterized" is mostly an NBA thing but Gorges got the equivalent of dunked on by Giroux.  Other than that I thought Gorges was actually pretty good.  Unlike Peter Laviolette, it seems that Jaques Martin was trying to actually match lines.  Gorges drew the group of Gagne, Richards and Carter and did a great job of shutting that line down but that one big mistake was rather glaring.

2. P.K. Subban - A second very unnderwhelming performance by Subban.  His poorly timed rush - and poorer decision with what to do with the puck when he needed to move it -  led directly to the second goal of the night.  Aside from that he just wasn't on his game.  He seemed to fall over himself once or twice and he wasn't making smart decisions with the puck.

1. Scott Gomez and Brian Gionta - +2 -11.  Seriously.  These are your best players and that's just really, really bad. This team needs them to be better and has for a while.  If they put in another effort like this one, the team really will be on its way to death (but not in quite the same way as the Phoenix Coyotes).