Commenter Passive Voice questioned my analysis in the Game 2 Scoring Chances post as I was basing my thoughts on head-to-head time on ice rather than head-to-head scoring chances.  This forced to recalibrate and count the chances broken out by matchup.  The results are extremely interesting and my first pass over this tells me that Todd McClellan isn't doing anything all that bad and that my original analysis wasn't too far off.  Thanks to Passive Voice for making me go the extra mile, it yielded some cool stuff.

Thanks also to commenter Verstig for reminding me of angled cells because the chances matrix looked terrible until I changed the look and feel to what he's doing.

Note:  Each matrix is compiled from San Jose's perspective

First off, we'll take a look at the the raw chances data, broken down into a head-to-head matrix.  I'm only using the top three lines in each case because the ice time being given to the fourth lines in this series is insignificant. 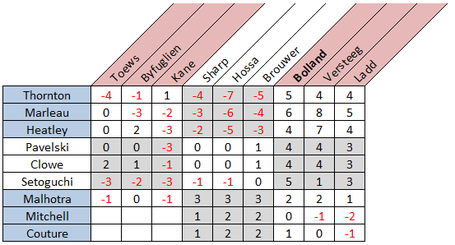 A commenter in the game two thread took issue with me saying that Dave Bolland was getting drilled at even strength.  He thought that there was some nuance about gamesmanship and so forth going on that made things better for Bolland.  There isn't.  Bolland isn't outchancing any of the top nine forwards from the Sharks.  I don't think he necessarily has to do so, as I said in the last thread, he's providing cover for the Jonathan Toews line.  The head-to-head chances show that in reality, Bolland is...getting drilled, but not only by Joe Thornton, he's getting drilled by Joe Pavelski as well.

What a straight analysis against time on ice didn't reveal is the extent to which Patrick Sharp and his linemates have beaten up on Thornton and company.  These samples are insanely small, but I wonder if it makes more sense for Joel Quenneville to match Sharp against Thornton, Bolland against Pavelski and Toews against Manny Malhotra when possible.

These numbers are just raw numbers, so we need to bring a bit of context to them.  Below is the head-to-head ice time matrix.  This is the total even strength time for each team's top nine forwards against each other. 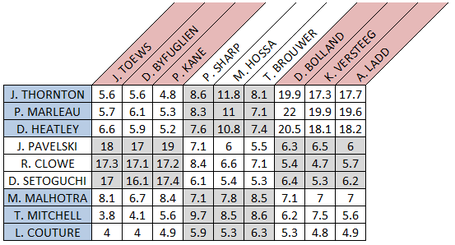 McClellan let Quenneville use Bolland against Thornton for the most part and Pavelski was forced to play Toews.  Sharp's minutes have been well-spread against San Jose's top nine, as has Manny Malhotra's time against Chicago's top nine.

Now we can bring some additional context to the numbers by calculating the scoring chances data per fifteen minutes of head-to-head even strength time: 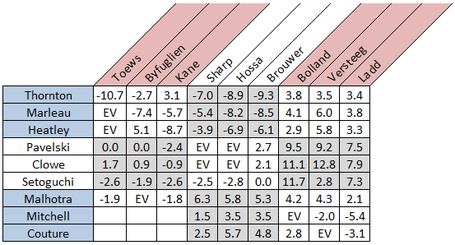 The biggest advantage in the series is by Pavelski on Bolland, but that's also the smallest sample of time amongst any match up.   Next up is Sharp's advantage on Thornton and then Thornton's advantage on Bolland.  Looking at the data this way, it shows that Dave Bolland is...getting drilled.  It also shows that Pavelski is fairing rather well against Toews and Sharp, in addition to drilling Bolland.  Chicago's only real advantage has been Sharp against Thornton.