The Flyers really had the Canadiens off their game in this one.  In the first period the Canadiens were forechecking hard so they must have been down big early.  By the end, Ryan O'Byrne was on the ice so it was must have been a blow-out.  Even the blocked shots weren't in their favour!  It was a slaughter!  Or not.  The first period was actually similar to Games One and Two with the important difference being that the Canadiens actually cashed a couple of chances.  The other two periods were not similar at all to Games One and Two.  The Flyers didn't have a push in them and seemed out of synch all night long. 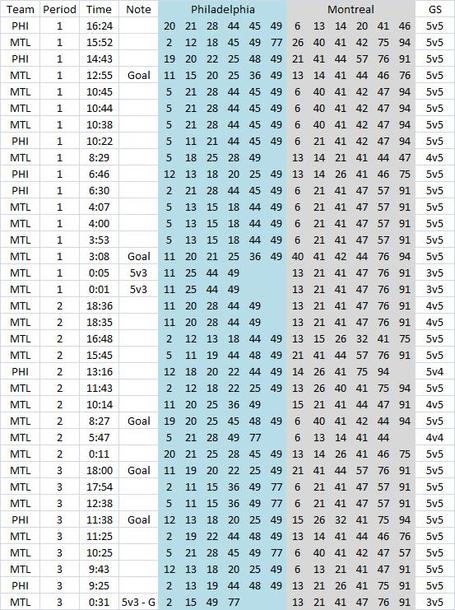 It seems that Olivier (En Attendant Les Nordiques) and I are becoming more and more divergent as the series goes on, though you can again tell that the two of us were scoring the same game.  I had the Canadiens winning on total chances 28-8 compared to 22-8 for Olivier. Of the 36 chances I scored, we had 27 chances in common with the Canadiens winning on shared chances 20-7.  The Cohen Kappa Test that Vic set up for us results in a correlation of 0.71 this time which is still good but it's our lowest total so far.  My "unique" chances were as follows:

So yeah.  The Canadiens were flat-out the better team in every way in this game.  I liked Jaroslav Halak's quote about the fans being a "sixth and seventh player on the ice."  Even to him, the game felt like a two-man advantage for most of the night.  One of the most encouraging things for Montreal is likely the play of the penalty killing unit which had struggled in the first two games of the series.  In this game, they made it very difficult for the Flyers to gain access to the zone and they did a good job of covering passing and shooting lanes on the few occasions Montreal was able to set up.  Still, it's hard to know how much of their success was them being good and how much of it was Philadelphia being out-of-sorts.  For instance, with the score 3-0 Montreal in the second period, Chris Pronger was wide open in the slot but the cross-ice pass from Matt Carle missed horribly and the puck came up the ice with about 6:30 to go.  Then Braydon Coburn gave the puck away at 5:55 almost leading to a Montreal break-away.  About five seconds later Ryan Parent was stripped of the puck and no one had picked up the Canadiens' forward in front of the net, so he was all alone with time from about ten feet.  In another sequence, Scott Hartnell had a man wide open driving toward the high slot but sent the pass five feet behind them and the Canadiens immediately went out 2-on-1.  It was a sloppy, sloppy game.  Giveaways and missed passes galore.  It was, dare I say it, like watching the Oilers. 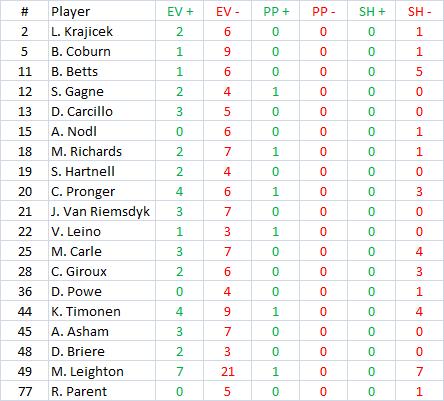 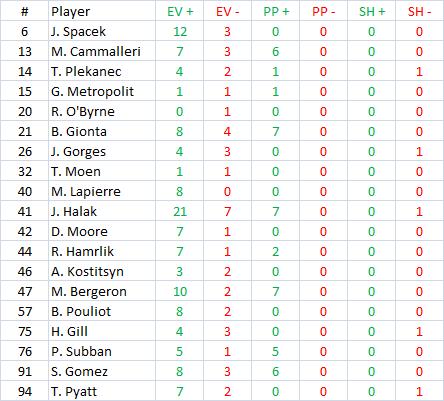 A lot of ugly games in here, but none funnier than Ryan O'Byrne's -1 chance differential in four shifts.  That sure sticks out when most of the rest of your team is +4 or better.  Gill and Gorges look a little close to the even mark too, but at least they were taking on the Gagne line.  For the Flyers, it's just all bad.  Even Peter Laviolette drove me bonkers.  With about six minutes to go the Flyers get a power play down by three but decide not to pull the goalie.  The decision to pull him seems like a no-brainer to me and I'm chastising Laviolette in my mind for giving up the ghost a bit too soon.  And then with three minutes left, he pulls the goalie.  I am incredulous.  If he hadn't yet given up, why oh why did he not pull the goalie on that power play to create a six-on-four?  It doesn't make even a lick of sense.

Their Father is God Almighty

3. Roman Hamrlik - He played the majority of his evening against Briere, Leino and Hartnell and came out way ahead.  His two points were a more a function of making safe and simple plays than anything that brought you out of your seat.  And in this game, the simple play led to a good bounce that Montreal took and made into a scoring chance.  Hamrlik was the embodiment of that consistent effort.

2. Mike Cammalleri - The first goal is so important to the Canadiens and he made sure the they got it.  His play in front of the net on the first goal was superb.  A little cross-check to create separation between himself and the defender followed by a quick puck retrieval and a high shot that was off his stick as fast as it got there to begin with.  It's always fun watching guys with really good offensive instincts. Hard to believe the Flames decided to let this guy go so that they could hold on to Olli Jokinen.  Yeesh.

1. Maxim Lapierre - My lasting memory of this player is his big shit-eating grin after an unwarranted and particularly vicious hit from behind to Scott Nichol during the regular season.  For those who have read these scoring chances posts throughout the playoffs, Alex Burrows is a saint in my eyes compared to this guy.  But he played a very effective hockey game last night.  He notched the one assist of course but his game was much more than that.  He was hitting and chirping and just plain being an asshole all night.  And while that side of his game was going he still made time to to win puck battles, manage the puck effectively and stay in good defensive position.  It was pretty much a perfect game when you consider the man's role.

Their Father is The Devil

3. Andreas Nodl - His whole line was atrocious.  Nodl himself played a grand total of 4:49 at even strength and had six scoring chances against.  Ouch.  While he was on the ice at evens the Flyers generated 0 goals, 0 shots and 0 missed shots.  Bageled in scoring chances and bageled in Fenwick.  That is a bad, bad night.

2. Braydon Coburn - A team worst -8 scoring chance differential.  A team worst -10 Fenwick.  A team worst -13 Corsi.  That ridiculous penalty for picking up the puck and throwing it down the ice to go along with a hooking call earlier in the game.  Whether he was out there with the Scott Gomez line or the Dominic Moore line, the Canadiens were dominant.  I remember Flyers' fans complaining about this player earlier in the year and I hadn't really seen why in this series until tonight.

1. Matt Carle - On Montreal's first goal he looked lost as he tried desperately to make a play on Cammalleri.  He didn't.  There was a similar problem boxing out in front of the net on the second goal (though Pronger's brutal giveaway certainly didn't help matters).  The rebound went right in.  He was spinning in circles on the third goal, clearly confused about which guy to take.  On the fourth goal he gloved down a dump-in right onto the stick of Brian Gionta who calmly walked in alone and put the puck into the net.  And those are just the goals.  He couldn't cover the front of the net.  He couldn't make a clean pass.  He couldn't play hockey.