That was not what I expected.  No sir, no sir.  Buoyed by an early penalty kill the Canucks controlled the play through the first fourteen minutes of the game, rattling off seven of the first ten even strength chances.  The last of those chances was a microcosm of the whole game.  The puck was deep in the Chicago zone when Mason Raymond pursued and won the puck from a hapless Brent Sopel.  Tomas Kopecky took pity and came over to help his outworked teammate but ended up over-pursuing and just like that both guys were on the wrong side of the puck.  Raymond made a quick pass to Christian Ehrhoff who sifted the puck past both Patrick Sharp and Antti Niemi on a good shot from a not-so-good spot to put the Canucks up 1-0.

Ehrhoff's goal seemed to knock the Blackhawks out of their sleepy state and the newly awakened Hawks recorded the next six scoring chances in a six-minute stretch.  It began when Patrick Kane picked off Alexander Edler's pass in stride and blew right by.  Edler had just enough time to put his stick on Kane and take a penalty but no so much time that he was able to actually stop the young sniper.  And so it was a showdown between Kane and Luongo.  A goal by Kane and the score is tied mere seconds after the Canucks had established a well-earned lead.  A save and everyone in the building would know that the man they (B/L)oo would not be easy to beat.  And he wasn't.  He stopped that shot and then five more very good chances - and a myriad of other rubber - before Vancouver was finally able to muster one more chance to close out the period.  And it went in.  A giveaway by Sopel, a bad rebound by Niemi and a pretty shot by Mason Raymond made the score 2-0 headed to intermission.

Or, at least, it was intermission for the Canucks.  The Hawks, apparently, thought that the game was over.  Scoring chances and more after the jump. 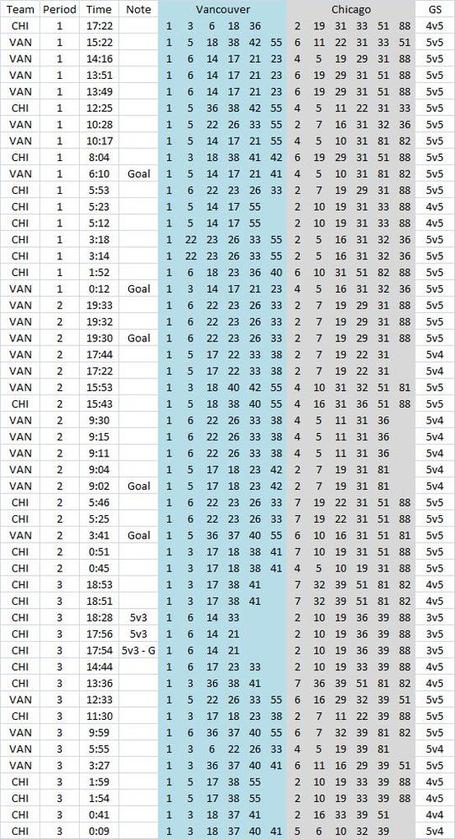 There were a lot of big runs in this game where one team controlled the play for an extended period of time.  A lot of this was driven by the way power plays were distributed with the Canucks taking two minor penalties in the first period compared to none for Chicago and the exact reverse of this in the second period.  But even with that jumble, the better team still shines through.  At one point in the second period - with the Canucks up on the scoreboard 3-0 - the even strength chances were 12-6 in favour of Vancouver which was probably a fair reflection of the play to that point.  The Hawks really only had one six-minute stretch in the first half of the game where they looked dangerous.  The rest of the time, Vancouver was in control.  Last night, the Canucks were just the better team. 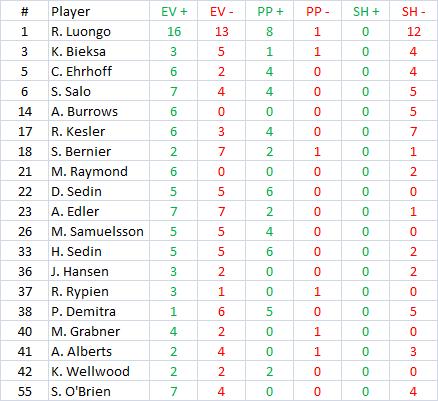 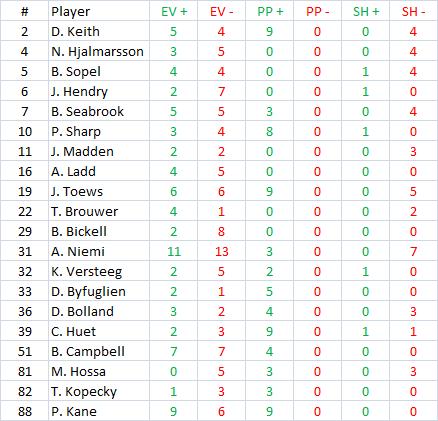 When you lose 5-1 not a lot good needs to be said but it's not happening below, so I thought I'd mention the positives here.  The Hawks top line with Patrick Kane and Jonathan Toews had their moments - Kane especially had his chances and lead the team in Corsi (+11, next closest was +5) - but those moments didn't usually include Bryan Bickell.  He didn't last the entire game on that line and should probably spend Game Two in the press-box.  His replacement on that top line, Troy Brouwer, was much, much better.  And that's about it for positives.

Just as you don't hear too much good about a team that loses 5-1, you don't hear too much bad about a team that wins by that same score.  The fact that there are more negatives about the Canucks than positives about the Hawks is maybe the most hopeful thing for Chicago.  The line of Steve Bernier, Pavol Demitra and Kyle Wellwood was a complete failure. As you can tell from the chances, that fell mostly on the wingers.  Ryan Kesler, for instance, was 6-0 on chances tonight... except when he had a couple of odd shifts with those two wingers and suddenly he's only 6-3. Wellwood's line was a real strength against the Kings and one that I'm sure Alain Vigneault would love to have back.  The other Canuck who really struggled was Alex Edler.  Three minor penalties in the first two periods is too many (just ask Andrew Alberts).  The penalties aside, he didn't look good.  He gave the puck away to Kane on the breakaway in the first period and later in the period he fell down as Chicago came rushing up the ice, but his partner covered.  A poor showing from mini-Mitchell.

When I Hoped For Good, Looked For Light

3. Alex Burrows - You know that Alex Burrows had a good game when I'm willing to acknowledge it.  His line was a force, especially in the first period.  They played against a dog's breakfast of opponents but at one point in the first period were matched-up against Kane and Toews when Jim Hughson remarked that we had "two first lines playing against each other."  If ever you needed a succinct argument for why Henrik Sedin doesn't deserve the Hart Trophy - and he most certainly doesn't - that's it.  Hughson reverted to the, shall we say, "traditional" narrative later, but this one is fundamentally more accurate.  Sedin isn't even the most valuable player on his team let alone the most valuable guy in the league.  Ryan Kesler is the man in Van and deserves to win the Selke but Henrik for the Hart?  Yeesh.  Oh, right, Burrows... uh... he was... gulp... good.

2. Roberto Luongo - Roberto Luongo looked fantastic once again.  His saves in the first period especially were impressive because the Hawks had so many quality chances in quick succession.  It's obvious enough that a 1-1 tie at any point and the game is likely quite different.  By far the biggest reason it didn't turn out that way is Luongo.  And because I'm a jerk... It's hard not to chuckle when Craig Simpson talks about the numbers not really mattering and how it's all about the big save at the key time and then talking about how Luongo's done just that since the third period of Game Four against the Kings.  Of note: Luongo's save percentage in that span is .942.  But it's not about the numbers!

1. Mason Raymond - I'm pretty sure he was named the first star on HNIC and the first star on nhl.com and he's the first star here too.  Alex Burrows may have been +2 but Mason Raymond was +2 if you know what I mean.  His contribution to each of the first two goals is described in the opening so I won't rehash them here but they were both great plays.  And he didn't give up anything of quality the other way.  Three more nights like that in the next six from Raymond, Kesler and Burrows and the Canucks are probably winners.

3. Antti Niemi - Luongo allowed one goal on twenty-six scoring chances.  Phenomenal.  Niemi allowed five on twenty-one.  Less so.  The first goal was from a pretty poor angle and that the second was the result of his own fat rebound.  He made some really good saves early in this game, but they don't really help all that much if you piss them away.  Whoever exorcised Luongo's United Center demons allowed them to take residence in the young Finn at the other end.   And then he jumped off a cliff.

2. Brent Sopel - You know Jim Hughson is a homer when Brent Sopel is one of the best shot-blockers in the league.  And when Brent Sopel has always been one of the best guys in the league at holding the blue-line.  And when you misquote Barry Trotz and pretend that he said that Sopel is "the one guy he'd take off the Chicago PK".  Listening to Hughson you'd think Sopel was fantastic! He wasn't.  Mason Raymond made him look like a scrub on the first goal and he straight-up gave the puck away to start the sequence that lead to the second one.  He didn't do a hell of a lot to redeem himself.  Unless you're Jim Hughson.  In which case, he didn't need to redeem himself because he was helping his real team get the win.

1. Marian Hossa - Good grief.  The golden sombrero plus one is pretty embarrassing by itself.  The two minor penalties besides is just icing on the cake.  In looking through my notes I see a positive play for Hossa where he breaks up a scoring chance in front of his net by stealing the puck from... Rick Rypien.  And isn't that a two-edged sword.  Nice play, but your line is giving up cycle chances to a line that includes Rick Rypien.  Now, it's not like he was matched up against the fourth line all night, but it is true that the forwards Hossa played the most against were Jannik Hansen, Michael Grabner and Rypien.  Getting brutally outchanced is one thing.  Getting brutally outchanced when a third of your ice time is against the fourth line?  That's a Lupul.