The third period of this game was one of the worst periods of hockey I've ever seen from a team that needed to score two in order to tie the game.  The Montreal Canadiens weren't dominated.  They were just listless and perhaps confused.  They seemed to have no idea that they needed to score a goal and that the Flyers only interest was in preventing them from scoring (though the Flyers did in fact score a goal, albeit from a terrible angle).  The only defender I saw consistently pinching up into the play was P.K. Subban.  Down by three while penalty killing with about five minutes to go, the Canadiens basically played it straight, never putting any pressure on the Flyers in their own zone.  It's extremely rare for one team to go an entire period without registering a single scoring chance.  It is even more rare that the team doing so manages the task in the third period of a game that they're trailing.  It was flabbergasting. 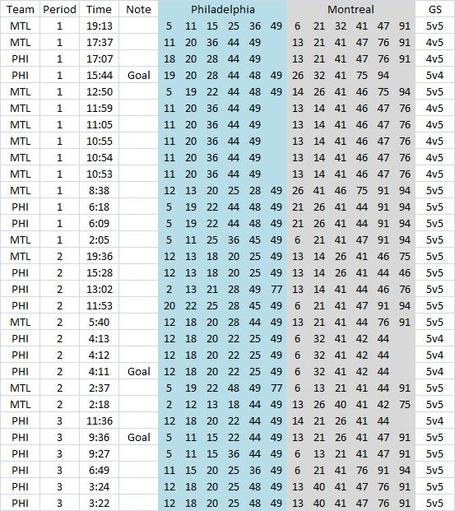 Olivier (En Attendant Les Nordiques) and I were again quite close in counting chances.  I had the Flyers up 16-14 overall for 30 total chances while Olivier had the Flyers up 15-12 for 27 total chances.  Of the 30 chances I scored, we had 25 chances in common (Flyers up 14-11) and using the Cohen Kappa Test that Vic set up for us, our results have a correlation of 0.78 which is right on track with Game One. My "unique" chances were as follows:

This game was like an extreme version of Game One at even strength.  The Canadiens got the better chances in the first period but by the end of the game Philadelphia had taken control.  Given the score after two periods, the chances in the third period were very surprising.  The Flyers were also very good on the power play with five chances in about 5:30 minutes plus a lot of time set up in the offensive zone.  Two of those 5:30 minutes were also very late in the third period with Philadelphia leading by three, so they likely weren't pressing for a goal as much as you might otherwise expect.  By contrast, the Montreal power play had one really good sequence in the first period but otherwise didn't generate anything and had trouble gaining the zone. 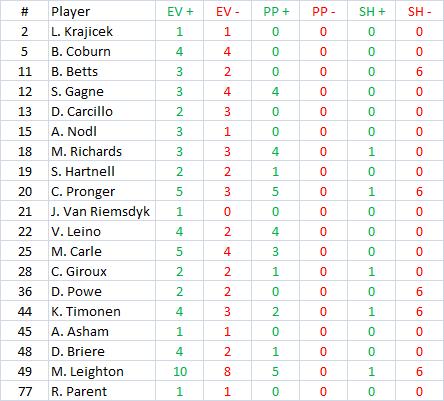 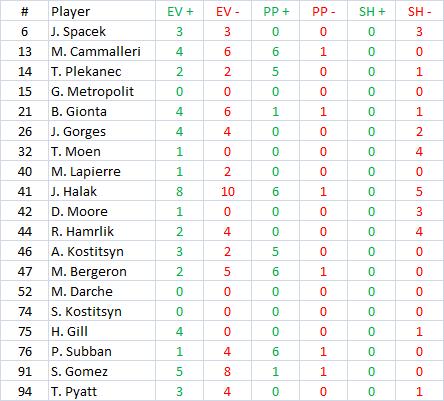 Neither coach has really hunted any specific match-ups so far so it will be interesting to see what happens when the series goes to Montreal.  I would think Montreal would look to find some harder match-ups considering the outcome of the last two games, but it's hard to do that against a Philadelphia team that spreads its scoring to multiple lines.  A lot of Flyers did some good things on this night.  Claude Giroux had another solid evening, drawing a penalty and then setting up the Flyers' first goal with a beautiful pass through traffic to Danny Briere who scored his ninth goal in eleven games.

3. Andrei Kostitsyn - I liked his game a lot more than Jacques Martin.  Kostitsyn only got five shifts in the third period with Montreal looking for the tie which I found pretty surprising considering he's one of their better offensive players.  Yet guys like Tom Pyatt, Maxim Lapierre and Travis Moen saw more ice.  Strange.  Once you consider that Kostitsyn was one of only a few Canadiens on for three or more positive chances at even strength and that he led the team in Corsi differential (+8) it just gets that much stranger.  At any rate, I thought he played a good game.

2. Ville Leino - Leino was instrumental in creating the game's second goal with his determined play in front of the net.  He then scored the third goal on what was a very poorly played shot by Jaroslav Halak.  Leino also led the Flyers with six shots, was one of five Flyer forwards with a positive Corsi differential and despite being one of four Flyer skaters without an official hit, seemed more than willing to battle physically to win pucks.

1. Michael Leighton - On the one hand, it's hard to imagine an easier third period.  On the other hand, Leighton is the biggest reason the Flyers came out of the first period with a lead.  A few very good saves in the first period was enough to maintain a lead through one and from there onward it was pretty smooth sailing.  He had some trouble controlling shots after he made an initial save but the Canadiens had even more trouble getting to those loose pucks in time.  But despite whatever flaws might be pointed out, two consecutive shutouts is an impressive achievement.

3. Scott Gomez - A second consecutive difficult game for Gomez.  The Flyers really haven't been matching lines much in this series and that trend continued in this game.  Peter Laviolette made sure to keep his bottom pairing defenders away from Gomez but other than that almost everybody got a turn.  Yet Gomez couldn't capitalize against anyone.  Against Blair Betts he was +1 -2, against Mike Richards +1 -3, against Claude Giroux +2 -1 and against Daniel Briere +1 -4.  The only center he beat was Giroux but he also took a hooking penalty on Giroux in the first that led to the Flyers' first goal.  And really, Gomez needs to be one of Montreal's offensive leaders.  In the third period, he (and many others) just didn't get it done.

2. Roman Hamrlik - He seemed slow on a number of occasions and notably so on the second Flyers goal where he let Simon Gagne skate around him to go behind the net.  Then, Gagne passed the puck to the front and Hamrlik turned to see Leino with the puck.  After Leino took the shot, Gagne picked up the rebound and put it in the net while Hamrlik turned again.  The sequence ends with Hamrlik bent over either in exhaustion or frustration.  In the third period he seemed hesitant to cheat for offence and while that may not have been his call, it was hard to watch.

1. Jacques Martin - I try not to be overly critical of coaching but that third period was awful.  There's a time to worry about strong defensive play and a time to let loose in order to create chances.  Now, maybe the Canadiens were letting loose and just aren't very good at it.  But something tells me that's not it.  Playing Tom Pyatt with Gionta and Gomez through the third period doesn't strike me as cheating for offence.  Neither does using your regular defensive forwards to kill a penalty when you're down three with five minutes to go.  And, frankly, neither does a period in which there were only six total chances for both teams.