On his 30th birthday, the Flying Finn - who just might wing it for Europe when these playoffs end - burned a permanent place in the memory, guaranteed a berth in the Hockey Hall of Fame, a spot for his uniform in the Northlands Coliseum rafters alongside No. 99 and No. 11 and maybe one or two more, and he sent the Edmonton Oilers home with something very like a lock on the 1990 Stanley Cup.

Jari Kurri was almost done as an Edmonton Oiler. After a glorious decade of sharing his marvelous gifts with us, he saved his greatest moment almost to the last. What a birthday gift it was, 20 years ago today, the day Jari turned 30.

Do the math, dear reader, and you will quickly realize that today is Jari's 50th birthday. So let's start by wishing the man well as he attends to his duties as Finland's General Manager and Elder Statesman at the ongoing World Championships in Germany. One of the game's great international stars continues to carve out a productive and successful career in the game which is as great to see as it is unsurprising.

Back in the day the Worlds used to be already over at this time of year, while the NHL was a full series ahead of where it stands today, and in the Stanley Cup Finals. So it was on May, 1990, when the Oilers took on the Bruins in Game Two. The Oil were confounding the pundits by threatening to win the Stanley Cup just two years after the crippling loss of Wayne Gretzky. The squad had already said goodbye to Paul Coffey, and that spring of '90 saw the loss of Grant Fuhr to a shoulder injury. The dynasty seemed to have crumbled before our eyes.

Still, key players remained, among them Jari Kurri. The great Finn was faced with monumental task of adapting his game to the new circumstances, and in passing this test over the two subsequent years, surely locked up that Hall of Fame berth. Among other things, Kurri was formally brought into the core leadership group, joining fellow respected veterans Mark Messier and Kevin Lowe as lettered players. Much is made - including by me! - of Messier's role in that reorganization, but Kurri did his part and then some.

Start on the ice. Messier still had his great linemate, Glenn Anderson, as well as Craig Simpson, who was the primary return for Coffey. Meanwhile, Kurri was still paired with his fellow Finn Esa Tikkanen on the port side, but the pair's centre went from Wayne Gretzky to talented turncoat Jimmy Carson to journeyman plugger Mark Lamb. That'll put a hole in your QualTeam. Kurri was suddenly the most skilled player on his line, and immediately became the primary puck carrier and playmaker, a role he adapted to effortlessly. He scored his usual 40 goals and 100 points and made his fifth All-Star team in '88-89, joining his old pal Gretz on the second team. Halfway through the next, his 10th season, Kurri became just the 25th NHLer, and first European, to reach the 1,000-point milestone. Not bad for a 69th overall draft pick who thought he would come to North America for one year.

It's interesting to review the team's production in the wake of Gretzky's departure. They had averaged 4.96 goals per game during the 8 years Gretzky and Kurri were together on the team, but that fell off to 4.00 in 1988-90, nearly a 20% drop. (A league-wide scoring decline underway in the late 80s was partly responsible.) However, the guy who might be expected to suffer the most, Jari Kurri, saw his own output drop by only about 10%. Expressed as a percentage of team goals and prorated to games actually played, Kurri was involved in the scoring play on about 28.5% of Oilers goals during Gretzky's time; that figure rose to 31.7% in his final two years as an Oiler. A pretty impressive response to the new challenge, all things considered.

By the 1990 playoff run, the line my seatmates and I laughingly called Lamb-Kurri-Tikka were a tasty trio, spicing up the Oilers attack with crucial secondary scoring and combining for 66 points in the Oilers 22 playoff games. Not surprisingly, Kurri topped the unit with 10-15-25, while leading all Oiler forwards with a +13 rating. The line delivered all manner of huge goals, especially in the seven-game test against the Jets which saw the Oil claw out of a 3-1 series hole: Kurri set up Lamb for the OT winner in Game Two; scored the biggest goal of the entire playoffs with an absolute rocket of a shot to decide Game Six and silence the whited out faithful at Winnipeg Arena that were hoping to finally slay the dragon; then opened the scoring in Game Seven to start the Oilers on their way to the next round. The dynasty had been that >||< close to ending with a post-Gretzkian whimper, but some of his former sidekicks had other ideas.

Come the SCF and the "underdog" Oilers opened the series in hostile Boston Garden. With Bill Ranford providing clutch netminding, the two teams played deep into the night in Game One. Finally Petr Klima broke it up, taking Kurri's feed and depositing it behind Andy Moog 55:13 into overtime, ending what is still the longest game in SCF history. Klima and Ranford were the heroes; Kurri, the silent assassin, stayed in his preferred shadows, another job well done.

Game Two, however, was all about Kurri, as he exploded for a flurry of goals, points, records and milestones to celebrate his 30th birthday. Details and video after the jump.

That last goal made several more dents in the record book of the day:

That's an awful lot of good things happening at once, enough to swell the head of a less humble man. Watch the last part of the video to see how much it affected Jari Kurri.

Cole's column called it: after sweeping those first two in hostile Boston Garden the Oilers did have a lock on that fifth Cup . They returned home to a hiccup in Game Three before putting it away with convincing wins in Games Four and Five. There were new heroes as the Messier line exploded in Game Four while Ranford held the fort and ultimately was recognized as the Conn Smythe winner. Kurri celebrated his fifth Stanley Cup before heading off to Europe, his days as an Oiler done after ten years. Back to you, Cam:

Don Cherry, hockey's foremost European-baiter, will probably say something about Finns having no loyalty - as though Kurri just dropped in for a quick, easy 10 years and five Stanley Cups, the carpetbagger.

Well, Cherry always was wrong about Kurri. He's tough, and he's the definitive team player. And he's a winner.

Jari Kurri was such a winner that the Oilers haven't won again since the day he left town, 20 long years ago. They had survived to win again without Coffey, and again without Gretzky, but the loss of yet a third Hall of Famer in his fullest maturity was too much to bear. The others followed a year later, and that was that.

Jari himself never fared as well in the second part of his career either. He returned to the NHL after a year in Italy, but his hands were starting to desert him. People who saw only that second career as a competent journeyman with the Kings, Rangers, Ducks, and Avalance probably wondered what the fuss was about. But as Cam Cole said up top, his credentials for the Hockey Hall of Fame were already fully established by the time he left Edmonton. I'm convinced that if he had never returned to North America he still would have been a first ballot Hall of Famer based on his fabulous decade in the River City.

Most of the marks Jari set that magical night (that's for you, Vic!) have since been erased. Gretzky regained the playoff goal scoring lead the next year, with Kurri safely in Europe. The Great One eventually wound up with 10 playoff hat tricks to stand alone in that category as well. Two other men, Mark Messier and Glenn Anderson (great Oilers both) joined the still-exclusive 200-point club. However, the 5 points in one SCF game remains a record, in fact Jari Kurri is the only man to have had such a game on the NHL's greatest stage in the last 65 years.

Happy birthday, Jari, then and now. 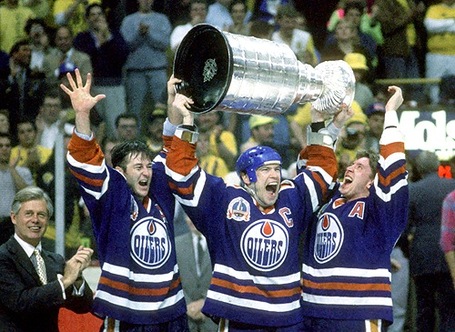