As far as 6-0 games go, this one was close.  Everything that had gone right for the Canadiens over the last several games went wrong tonight.  Jaroslav Halak couldn't make a save.  The forwards couldn't capitalize on their chances.  The defenders couldn't clear the front of the net.  The whole team couldn't stay out of the box.  In so many ways, it was a game to forget.  And yet, penalties aside, the Canadiens had played a good first period, outshooting and outchancing Philadelphia.  The Flyers fielded a lot of post-game questions that suggested the game was easy but each and every time the answer was sincerely critical of their own game..  Peter Laviolette, Chris Pronger, Daniel Briere and on down the line all saying that they needed to be better than they were in the first period and that the game could've been very different with a bounce the other way. I don't know if it matters a whole lot but when I hear the Flyers speak about the Canadiens, they seem like the first team to think that the Canadiens could really beat them on merit.  Humility from the Flyers.  Who would've thunk it? 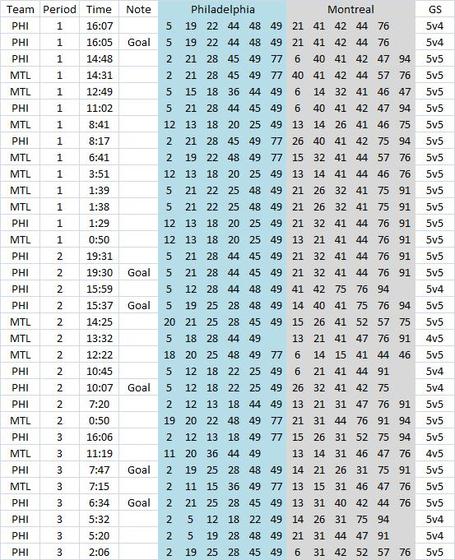 As some of you may already know, Olivier (En Attendant Les Nordiques) has been counting scoring chances for the Canadiens all season and has continued doing so throughout the playoffs.  With both Olivier and I counting scoring chances for this series, we should get a pretty good look at whether or not these counts are consistent between observers.  In this game, I scored 33 chances, Olivier scored 27 and we had 26 chances in common.  Thanks to the aforementioned Vic Ferrari, I can run something called Cohen's Kappa Test to see the degree of our agreement. According to Vic's test, our two lists of results have a correlation of 0.78 which is a pretty good level of agreement. My "unique" chances were as follows:

Back to the game itself, the game was actually very close at even strength with Montreal having the advantage after the first period.  The big difference in terms of chances came on special teams, where Philadelphia scored two of its first four goals (and a third just after a penalty ended) to put the game out of reach.  Although the Canadiens probably feel that they can do a better job of penalty killing, the fact is, they spent over ten minutes of the game killing penalties and of the six minor penalties they took, several were of the boneheaded variety.  Jaroslav Halak also struggled on the penalty kill, allowing a couple of goals from outside the faceoff dots (Briere and Gagne with the third and fourth goals of the night) before getting pulled.  Better goaltending and more disciplined play should cure most of what hurt the Canadiens defensively. 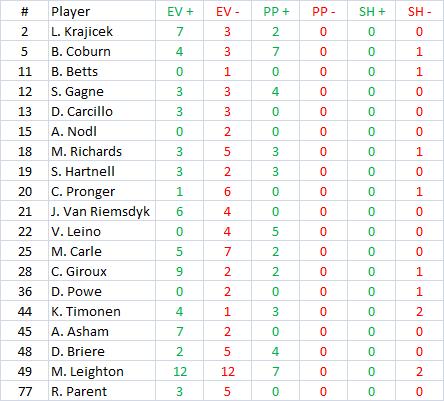 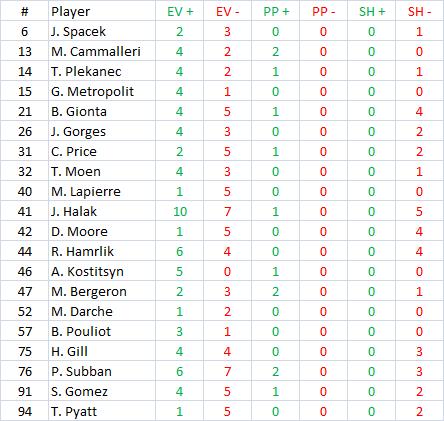 Montreal's line of Cammalleri, Kostitsyn and Plekanec was by far their most effective on the night getting several of Montreal's best chances against Philadelphia's top pairing of Pronger and Carle.  If they can be that effective throughout the series, the Canadiens actually have a pretty good chance of winning.  They'll need their goalie to be better of course and they'll need more from Gomez and Gionta as well, but having their top unit winning the battle at even strength is significant.

3. Michael Leighton - He didn't allow a goal!  There isn't a whole lot more to say, though I will say that the didn't need to make too many marvelous saves.  Even the scoring chances I've noted weren't generally of the most dangerous variety.  But credit where it's due, Leighton stopped every single one and was a big contributor to the win.

2. Kimmo Timonen - His partner, Braydon Coburn, scored the first goal of the game but Timonen also played a significant role on an effective Flyers power play.  That duo was also charged with taking on Scott Gomez and Brian Gionta with surprisingly (in my view) good results.  Both Gionta and Gomez are very good hockey players at even strength and that pairing did a great job of preventing them from getting a sniff in the offensive zone.  Gomez had his best chance of the game in the first period when Timonen was riding pine.  Timonen also led the team in SH TOI with 4:35.

1. Claude Giroux - I thought he and linemate James Van Riemsdyk were both fantastic, though I liked Giroux a bit more.  In addition to leading his team in chance differential, he also led them in the faceoff circle, winning nine of his fourteen draws.  The most influential of those came early in the second period when he pushed the puck forward for Van Riemsdyk who put the puck in the net to give the Flyers a 2-0 edge.  Giroux's goal to put the Flyers ahead 6-0 was a nice reward for a game well played.

3. P.K. Subban - I haven't seen much of this player but he wasn't very impressive on this night.  He was on the ice for four of the Philadlephia goals, including the first three when the result was still in doubt.  On the first goal Ville Leino made him look like an absolute fool as Subban laid down to block a shot only to see Leino dance around him to the front of the net to get a shot which led to a rebound goal.  On the second goal, it was Giroux's turn to let Subban play the role of Washington General by pushing the puck forward to himself and then passing right through Subban to an open Van Riemsdyk in front of the net.  Bad, bad mistakes.

2. Jaroslav Halak - After getting it done so many nights in a row Halak really didn't give his team much chance in this one.  Two of the four goals came from just outside the dots and those need to be stopped.  He's been very good for much of the playoffs but has been mixing in the occasional stinker.  The Canadiens had better hope they remain very occasional.

1. Scott Gomez - Penalties.  His first one was just plain dumb (punching a guy from behind as he skates to the bench) and it cost the Canadiens a goal.  His second penalty was similarly stupid (a retaliatory slash), though this time Gomez was able to get out of the box before Philly scored.  The penalties aside, Gomez wasn't particularly effective against at even strength which is where the Canadiens need him most.  He may not have been the absolute worst player on the ice, but he was definitely the most underwhelming given my expectations.