Share All sharing options for: Blackhawks and Canucks - Series Review

I didn't think the Canucks were going to win this series, but the way they lost was a little bit surprising.  I figured the Canucks would need Roberto Luongo to keep them in this series in order for them to have a chance.  That wasn't the case.  The Canucks held their own at even strength for the first five games and were done in by poor play on special teams, especially on the power play and even by Luongo himself who just wasn't good enough over this six game stretch.  Short-handed goals, in particular, hurt them badly, especially in Game Two which they may have deserved to win considering how well they played at even strength.  But it wasn't to be.  After the jump we'll looke at the scoring chances for both sides over the course of all six games.

I'll start by giving the links to each game in case you want to be reminded of any particular contest when looking at the totals below:

Prior to Game Six, the totals were much closer and Vancouver was actually ahead at even strength.  The series was largely won and lost on special teams in those games.  In Games One through Five the Blackhawks had 39 chances on the power play or short-handed compared to only 29 chances for the Canucks.  Even in Game Six, the Canucks outchanced the Blackhawks on special teams 7-4 but were outscored 1-0 when Dave Bolland scored on a second period breakaway. 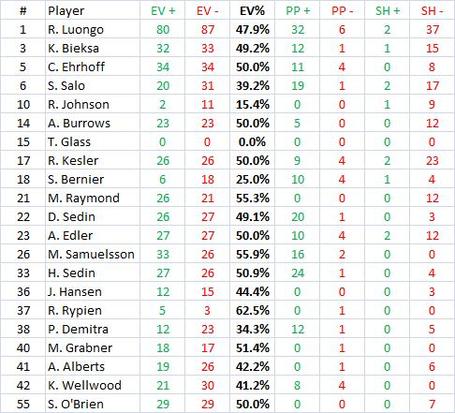 With the injuries to Willie Mitchell, Sami Salo (in Game Five) and Alex Edler (in Game Six), a lot of defenders saw their difficulty of minutes go way up.  In my opinion, they coped pretty well, especially Shane O'Brien who played much better toward the end of the series than he had at the beginning.  Sami Salo's numbers here look awful but he got crushed in Game Six when he was playing through an injury which probably had something to do with it.  If Mitchell isn't back, I'm convinced they'll need someone who knows how to clear bodies in front of the net.

The forwards are an interesting group.  I'll say off the top that Daniel and Henrik Sedin weren't good enough in this series.  They were taking on some pretty darn good players, but if the Canucks are going to win they'll need the Sedins to do more than break even.  Beyond those two, it seems to me that Vancouver needs to find a couple more players who can actually play in order to have the depth to compete with some of the really good teams in the league.  In this series they were really only missing one player in the top nine because Michael Grabner played very well on a line with Mikael Samuelsson and Kyle Wellwood.  The problem was that meant Alex Burrows needed to move up with the Sedins which left Ryan Kesler and Mason Raymond with Pavol Demitra to carry around.  And Demitra was bad.  When Demitra wasn't there, the Canucks ran Samuelsson with the Sedins, Burrows with Raymond and Kesler and Steve Bernier with Wellwood and another linemate.  The problem being that Steve Bernier was awful.  If I were Mike Gillis, two or three solid even strength forwards would be on my list of things to find as unrestricted free agents.  This team could be a lot scarier if it also has Manny Malhotra and Colby Armstrong next year.

Roberto Luongo's series was somewhat less than what his fans expected.  He allowed 22 goals in the series on 130 scoring chances which is about one goal every six chances.  That's not atrocious but it isn't all that good either and if you believe Luongo provides you with an advantage in goal, it just isn't good enough.  If Antti Niemi was going to be the better goalie in this series, Vancouver had very little chance.  Luongo's post-series comments are getting pounced on and he deserves it to some extent.  But it is good to remember they came immediately after Game Six, a time when he probably should have been upset with how the team played in front of him.  No one was good enough to win that night. 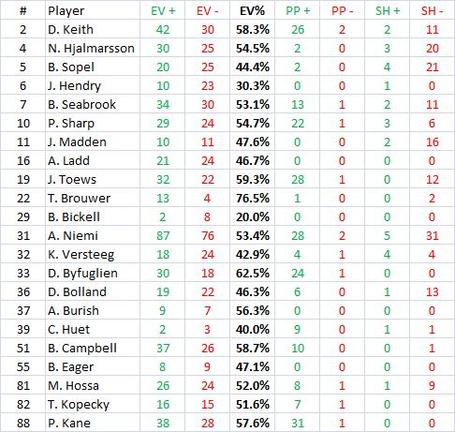 The top line of Dustin Byfuglien, Patrick Kane and Jonathan Toews were very good in this series, as was the checking line of Andrew Ladd, Dave Bolland and Kris Versteeg.  The top unit were great against Vancouver's depth and on the power play while the checking line did a pretty good job against the Sedins.  Joel Quenneville was able to get that match-up with consistency which I found pretty surprising given how well it was working.  I thought that Vigneault was going to try to go power-v-power in Game Six but it didn't happen.  Marian Hossa ended up posting a positive scoring chance differential, but prior to Game Six  he was getting shelled.  Chicago's strength is their three very strong lines and they'll need that third group to be much better against San Jose.

On defence, I was surprised by the lack of quality depth.  The top four guys are all pretty good but after that things get rough quick.  Brent Sopel isn't any great shakes but he at least plays a significant role on the PK.  Jordan Hendry was downright bad.  My understanding is that Kim Johnsson is done for the season with his concussion which really makes the Hawks vulnerable on the back-end.  If I were Todd McLellan I would definitely try to get either Joe Pavelski or Joe Thornton out to take advantage of shifts involving a Sopel-Hendry pairing.