Usually I write a more balanced report about the whole of Team Canada, but this is after all an Oiler blog, and today the young Oiler prospect really was the story. I spent much of what was an otherwise desultory game isolating on the youngster, and was very pleased with what I saw.

The games were supposed to get tougher in the Qualifying Round, but after a Preliminary Round in which no team scored more than 6 goals in a game or 12 goals in all, Canada exploded for a dozen in today's game alone, thrashing disorganized, undisciplined Norway by a 12-1 count.

What could have caused such an eruption? Start with the insertion of Jordan Eberle into the line-up. The former World Junior hero made his World Senior debut a day before his 20th birthday, and wasted no time establishing himself as a major offensive threat, scoring 1-4-5, +3, and copping Player of the Game honours in his first game. Sure it was Norway and it was a blowout, but the kid did everything one might possibly hope for and more. His line with Rich Peverley and Evander Kane was effective right from the start. Starting the game on the fourth shift, they finished 1-2-3 among Canadian forwards in ice time, including 16:29 for Eberlehimself on 21 shifts. They dominated at even strength, and when Norway started to fall apart late in the second, took it to them on the powerplay as well. Eberle was ensconced by Craig MacTavish on the first unit right from the start, and made the most of the golden opportunity.

What a sight for Canadian and/or Oiler fans. All hands in the broadcast - Dave Randorf, Mike Johnson, Rob Black,  Dave Reid, Eberle's linemates (who they interviewed) couldn't stop raving about the guy. To add my voice to the chorus, I was totally impressed with Eberle's all-around game, his positioning both with and without the puck, his ability to slip a check, his soft hands, his ability to draw the defender toward him and then make his play, his ability to recognize and exploit the danger zone, his scorer's sense of timing ... all I can say is wow, this is one smart player. I have been excited about his potential all along, but today's display was an unexpectedly giant boost in the positive direction.

It wasn't as if everything he touched happened to wind up in the net, in the end he scored on just one of his team-leading 6 official shots. Indeed one of Eberle's first touches was to deposit a rebound only to have the apparent goal disallowed for a crease violation. What seemed like a bit of a cruel blow merely delayed the inevitable.

Eberle was on the ice for 6 Canadian goals, and played a significant role in each of them. I'll describe each after the break because collectively they give a taste of what this guy is about. 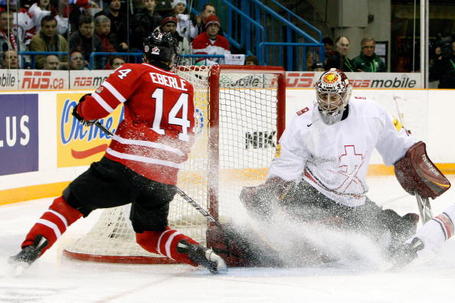 1:1 - Kane (Staal) EQ, 13:09 - Canada fell behind very early and looked sloppy and disorganized. It wasn't until the 13-minute mark that they solved Norwegian netminder Ruben Smith, filling in for the suspended Pal "Greatness" Grotnes. Eberle made a solid play in the neutral zone, taking the pass on the rush, drawing in the defender, making a sharp feed through to Kane. The play took a few seconds to unfold from there before Kane finally cashed Marc Staal's rebound.

3:1 - Giordano (Duchene, Eberle) EQ, 33:12 -  Eberle notched his first point on another fine play in the neutral zone during a line change. As the Norsemen were breaking out, Jordan dropped back into coverage, anticipated the breakout pass, and picked it off. Again he held it for a split second, drawing in a defender before banking a beauty soft pass off the boards to catch Matt Duchene flying up the wing in an onside position. Duchene raced in and fed Marc Giordano for the finish.

5:1 - Peverley (Kane, Eberle) EQ, 37:27 - Another strong play without the puck as Eberle came back deep into his own zone, bowled over a Norwegian forechecker, then fished the puck out of the corner with a soft backhand pass to a breaking Kane. From there Peverley completed the rush withanabsolute bullet wrist shot that tore past Smith. Perhaps a professional coach might frown on that pass from a risk/reward perspective, but Eberle executed it perfectly and for the second straight goal turned defence into instant offence.

7:1 - Whitney (Burns, Eberle) PP2, 39:06 - A fairly routine play with the two-man advantage, Eberle showed nice patience in the left wing circle, trying to take the play into the slot but not forcing it, taking it back outside and back to the point where Brent Burns and Ray Whitney looked after the rest. (Edit May 15: It would seem this assist was awarded but then taken away. Eberle was third man on the play and would have got a point in the NHL, but because the play went Eberle-Whitney-Burns-Whitney again, only one assist was awarded. So Eberle's final count for the game was "just" 1-3-4.)

8:1 - Kane (Eberle, Peverley) PP1, 39:48 - Same powerplay (the result of a bonehead major and game misconduct charged to Norse captain Tommy Jakobsen for bumping the official), just a one-man advantage as Eberle tried to slip a feed across the goal mouth to Kane on the far post. The first try didn't work, was deflected behind the net, but Eberle was aggressively involved in the recovery, regaining control of the play before making the exact same pass across, this time finding Kane's tape for the finish.

9:1 - Eberle (Peverley) PP1, 40:39 - By now Eberle had a disallowed goal, a "third assist", then three secondary assists, and finally a primary assist. There was only one thing left to do. Still on the same powerplay, now early in the third, Eberle and Peverley played give and go, eventually springing Jordan to walk in to the edge of the crease. As the goalie and defence reacted poorly, he showed patience in holding the puck, moving it into a better shooting angle, and popping one low to the far side. he won't score many in the NHL like that because the defences, PK units, and goalies are a tad less porous than disspirited Norway's, this was just another indication of Eberle's willingness and ability to take what is there. The guy's panic point is somewhere near zero, or at least it was today.

That's threefour assists in one period, a Canadian record, and threefour points in just 3:21 at one point.

We always have to remember, this was Norway after all. But of the Canadians who collectively dominated the Norsemen, Jordan Eberle stood out as the best. An easy choice for player of the Game, even with Tavares notching a bizarrely easy hat trick. Jordan was all anybody could talk about. Including me. :)

The less said about the rest of this game, the better. Norway played well for about 15 minutes but that was all the short-staffed, short-tempered vikings could offer. Patrick Thoresen and Mats Zuccarello Aasen had occasional moments, but the tide was coming in and it was riding high.

In other Canada/Oiler news, the third goaltender was announced as Devan Dubnyk! Wasn't expecting that. As I said yesterday:

A strong possibility is that with the previously-rumoured Carey Price stuck in Montreal ;), Messier may simply dip into the larger talent pool that has been there all along. It is difficult to imagine that any Oilers would be targeted under any but the most dire of circumstances.

I was right about the first part, I guess, and I can only hope I am wrong about the last. But surely this establishes Chris Mason as the Number One and Only. Still, a nice plum for DD, let's hope he gets a little game action and has a positive experience.

In other Oiler news, Magnus Pääjärvi-Svensson scored a goal and an assist to lead Sweden to a 4-2 win over Latvia. MPS is in the top 5 scorers of the tourney, while Eberle has already slipped into the top 10.

And in other Canadian news, the team added its last skater, promising Mason Raymond of Vancouver. Once he's here and assuming Steven Stamkos (mild concussion symptoms) returns to the line-up, it'll be interesting to see who comes out. Somehow I don't think it will be the "replacement player" Jordan Eberle!