Before the series started I talked about my unhappiness with the results from the Canucks first series against the Kings.  It was very reasonably pointed out to me that the Canucks probably weren't all that concerned with my happiness.  But last night, it sure felt like they were.  I'm sure that Alexander Edler's injury had something to do with it - it's pretty hard to play with two of your top three defenders out of the lineup and the only one left bound together with twine - but this team was terrible.  The forwards were terrible.  The defenders were terrible.  The goalie was... well, actually not as bad as he was in some other games.  In his own words: "I kept it under seven goals; improvement was made."  Now, I'm not sure if he was talking about Game Four of this series or Game Six from last season, but either way, he's absolutely right.  Scoring chances and more after the jump. 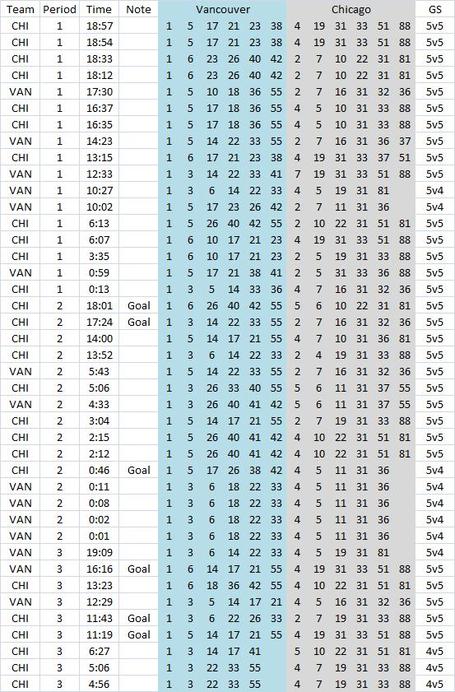 The whole game was one-sided.  The Canucks controlled the territorial play in the first period more than the scoring chances suggest, but they didn't get nearly as many good opportunities.  A lot of that is probably the relative talents of the defenders on each club.  Whereas Vancouver was playing with all of their defenders getting more responsibility than they were ready for, Chicago remained relatively healthy.  As Chicago began to pull away on the scoreboard, the play never turned consistently in the Canucks' favour.  The only time they seemed to generate some momentum was in the third period but that was quickly snuffed out when Kane and Byfuglien scored two goals in thirty seconds to put the game away. 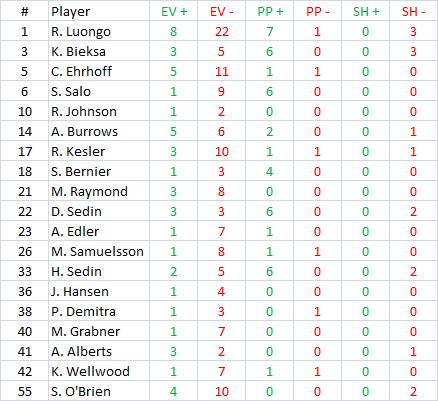 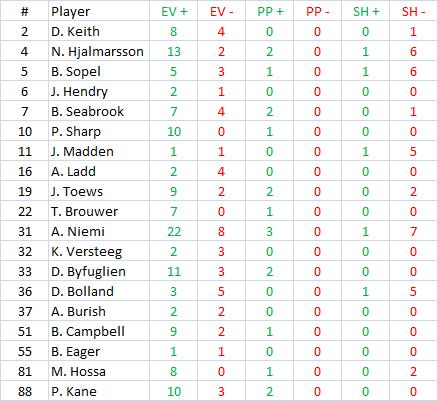 The match-ups in this game were pretty interesting.  With Salo playing through an injury and Edler done for the night after only seven minutes, Vigneault really didn't match any of his defenders against the Kane, Toews and Byfuglien.  Instead, he focused on keeping Andrew Alberts away from that group and let the other four players each take their turn.  The Sedins once again fell into a match-up with Dave Bolland's line that Vigneault didn't really try to avoid.  Against the Kings, the Sedins struggled against Michal Handzus on the road but were magnificient when put in a power-v-power situation against Anze Kopitar.  I can't help but wonder why there was never any concerted effort to match the Sedins against Jonathan Toews.  I suppose by granting Chicago their match-ups, it forces Quenneville to chase when he's on the road, but you'd think that after the results of Games Three and Four, Vigneault would have tried something different.

Participating in the Suffering of Christ

3. Antti Niemi - It wasn't exactly a spectacular performance but he was good enough to make sure the Canucks never got close.  For those of you who have paid attention to the Montreal Canadiens, you know that sometimes a team can get outchanced by ten or eleven and still win the game.  Niemi did his part to make sure that didn't happen.

2. Patrick Sharp - It's hard to say for sure, but maybe the problem with the Sharp-Hossa connection has been Tomas Kopecky.  Kopecky missed this game with an injury and Troy Brouwer took his spot.  And suddently the line was brilliant.  Sharp himself had a couple of glorious chances, getting robbed by Luongo on a breakaway and then later hitting the post.  Eventually, he decided to pass the puck to the scoring area where Brouwer tipped it into the top of the net to give the Hawks the lead.  The line was dominant all night long and a huge reason for the win.

1. Patrick Kane - Kane's line played very well all game (Kane himself led the team in Corsi at +9) but it was his play in the third period, when the Canucks had finally started to push back, that was most impressive.  After the Canucks had put together three or four good shifts, Kane found himself alone with Luongo and made his shot.  On the very next shift Kane trapped Christian Ehrhoff making a poorly timed pinch and sent Dustin Byfuglien in alone who also made his shot.  Where once there was a 3-1 lead and a prayer, there was now nothing.

3. Ryan Kesler - Apparently he's been playing hurt and I don't find that surprising at all.  He's normally such a dominant player but in these playoffs he's generally struggled.  Those struggles continued in this game.  He had trouble getting the puck into the offensive zone (normally a strength) and wasn't as hard on the puck as one would usually expect from a player of his quality.

2. Mikael Samuelsson - His line with Grabner and Wellwood was awful.  After two consecutive games where they gave Vancouver a good third option, the third group for the Canucks was dominated in the way I had been expecting all series.  Samuelsson had only one shot on the game and it didn't register as a scoring chance, so he really wasn't finding the soft spots that he normally does when he's scoring.  Further, at 5-1 the game was probably out of reach, but his blow-up with about eight minutes to go was, in a word, selfish.  I'm sure everyone on the team wanted to get their shots in but they all showed enough control not to do so.  Samuelsson didn't and made the odds of an extremely unlikely comeback that much worse in the process.

1. Sami Salo - Sometimes it's best not to play when you're injured.  I know that Aaron Rome and Nolan Baumgartner and whatever other scrub the Canucks might have used (that Mathieu Schneider trade doesn't look so good in hindsight) wasn't going to be a good player but if you can't really move around the ice, you probably shouldn't be playing.  The Blackhawks ran all over Salo all night long.