The Blackhawks were down two to start the second period but were storming forward, a comeback inevitable.  They had after all controlled the play in the first period and the Canucks foremost shut-down defender, Sami Salo, had already left for the hospital.  Goals were only a matter of time.  First it was Duncan Keith with a blast from the point through oodles of traffic.  Then it was Patrick Kane whistling a shot from the slot.  Then Dave Bolland, wide open in front thanks to some overpursuit from Christian Ehrhoff and Alexander Edler.  A minute later it was Andrew Alberts trying to go cross-ice in front of his own net leaving Patrick Sharp alone with the puck.  Save Luongo.  Miss Wide Left.  Save Luongo.  Save Luongo!  Still 2-0 Canucks.  No matter.  Salo was injured and the rest of the defence looked exposed as Chicago carried the play.  The comeback was inevitable.

And then something happened.  What it was I'm not sure.  Chicago continued to keep up the zone pressure but couldn't create chances.  They would shoot, and there would be no rebound or maybe the shot would be blocked or the pass to the open man would just miss.  And soon even the pressure disappeared and it was Vancouver with chance after chance.  By the third period, the whole thing had come unraveled.  The Blackhawks could have scored on all of their third period chances and lost the game. 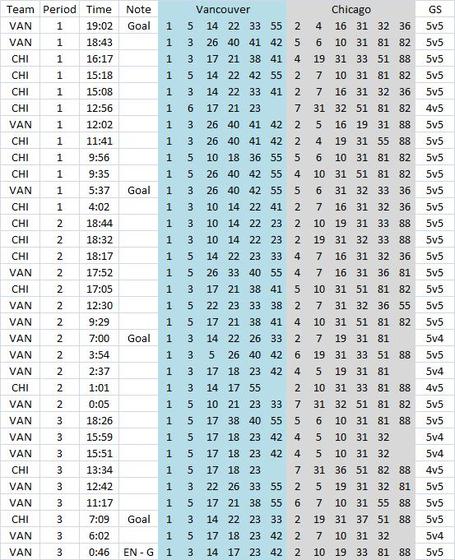 The Blackhawks were scored on during the first minute when Antti Niemi let in a softy from the point but were otherwise very good in the first period.  It was more of the same to start the second period as Chicago generated four chances in the first three minutes... and then three more for the last thirty-seven minutes of the game.  It seemed like every time the Blackhawks got the puck into Vancouver's zone, they weren't able to get quality opportunities, often because they couldn't get into good shooting positions but also because they couldn't get both the puck and their players to the front of the net.  Roberto Luongo was much better at controlling his rebounds in this game than in the last couple but the undermanned Canucks' defence were also very solid. 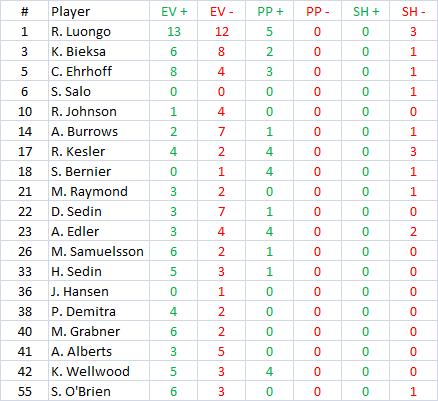 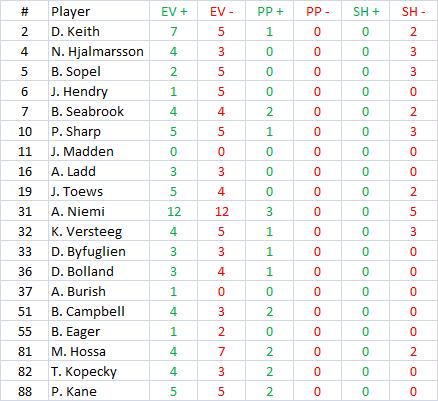 Sami Salo's injury loomed large on the Canucks' remaining defenders in this game.  Kevin Bieksa is getting a lot of credit for a good game because of his two goals - and the first one in particular was a great play from him - but I didn't think he was all that impressive compared to some of the other Vancouver defencemen.  Some of the red numbers at even strength from the Canucks came just as a power play was ending, so the EV differential is likely even more tilted than it appears.  Ryan Johnson, for instance, was actually 1-1 in terms of chances if you take out shifts extended from killing penalties.  Even with just those three chances taken out, you end up with a chance differential of 13-9 in favour of Vancouver at even strength.

3. Mikael Samuelsson - The second consecutive excellent game from the trio of Samuelsson, Kyle Wellwood and Michael Grabner, especially considering how much they played against Patrick Kane and Jonathan Toews.  I assume this is the match that Joel Quenneville was looking for and he had his way for about half of the game.  Yet with both Samuelsson and Kane on the ice, the Canucks went +2 -1 in the chances.  With Wellwood and Kane it was +3 -1.  They were the only three Canuck forwards with a positive Corsi and it wasn't a small number.  Samuelsson led the team at +9, Grabner was +8 and Wellwood +2.  Samuelsson himself also had two assists to go along with his line's territorial dominance.  A very impressive showing.

2. Shane O'Brien - Now, I think O'Brien is a bit of a doorknob generally speaking, but he really stepped up in this game.  With Sami Salo out after the first period, O'Brien ended up playing over nineteen minutes, including over two minutes on the penalty kill.  He took a stick to the face in the second period and came back within minutes.  And it wasn't just that he played a lot.  We also played well.  He ended the game even in terms of both Fenwick and Corsi, one of three Canuck defenders to do so (Ehrhoff and Salo were the others), a +3 for scoring chances and a +2 in even strength goal differential.  The Canucks needed their depth defenders to step up in this game and O'Brien did just that.

1. Roberto Luongo - After several less than stellar games in a row, Luongo played very well in this game.  He was able to make several point-blank stops in the first period and early in the second when the Blackhawks were pressing.  The one goal he did allow came off of a wonderful deflection where there was little he could have done.  He gave up fewer rebounds and when he did, his rebound control seemed better.  It was Roberto Luongo playing the way many Vancouver fans think he ought to play every night.

Mutilators of the Flesh

3. Jordan Hendry - He just isn't a very good player.  His chance differential is bad, his other numbers are bad and he looks bad doing it.  The play that sticks out for me is the Canucks second goal where he decided to pressure a forward at the red line.  In doing so - while the Chicago forwards were changing no less - he gave the Blackhawks an easy opportunity for a 2-on-1.  And what was the reward on the play if his pinch had succeeded?  There really wasn't much.  I suppose he'd have stolen the puck and perhaps dumped it in for the new Chicago forwards.  It was just a terrible risk-reward analysis that ended up in the back of Chicago's net.

2. Daniel Sedin - The Canucks need the Sedins to be dominant and the line of Henrik, Daniel and Alex Burrows was much closer to the opposite.  I don't remember many occasions where they managed to get the puck deep and cycle and Daniel himself didn't do much offensively.  He is supposed to be the shooter on a line with one of the best passers but he attempted only three shots with none of them landing on net.  He also took another minor penalty which is a bad habit for your best players to get into.

1. Marian Hossa - The Blackhawks weren't coming back and if there were doubts after the Blackhawks finally scored, Marian Hossa made certain that they didn't last long.  What a terrible penalty.  But that aside, Hossa wasn't impressive tonight and has generally been disappointing in the series as a whole.  One of the reasons Shane O'Brien was impressive was that he essentially shut down Marian Hossa when they were out there together.  Marian Hossa should win the battle.  In fact, Marian Hossa should be the best player on the ice about ninety per cent of the time considering the Hawks have in a depth role.  So far in this series, he hasn't been.