Penalties, penalty killing and, mostly, stupidity.  That pretty much sums up the reason the Canucks lost on Friday night.  The fans were adamant that something in the arena was "bullshit" for much of the second period and though they were - as they always do, regardless of the actual quality - referring to the "poor" refereeing, the word was much more applicable to some of the actions of their very own hometown heroes.  Shane O'Brien responding to one cross-checking penalty by taking another.  Daniel Sedin responding to his first penalty by cross-checking Kris Versteeg after the whistle and heading to the box for two more.  Alex Burrows cross-checking Dustin Byfuglien in the neck while he was on the ice to put his team down two men - a nice blend of cowardly and stupid on that one.  Kevin Bieksa punching John Madden right after Burrows had been assessed a penalty and before the puck was dropped.  That last play didn't earn Bieksa two minutes in the penalty box but it was illustrative of the Canucks' night in terms of overall discipline: they had very little.  The penalty kill - which has been "rescued" by the return of Ryan Johnson - proceeded to allow four power play goals and the Hawks went into cruise control on their way out of Vancouver, a 3-1 series lead firmly in hand. 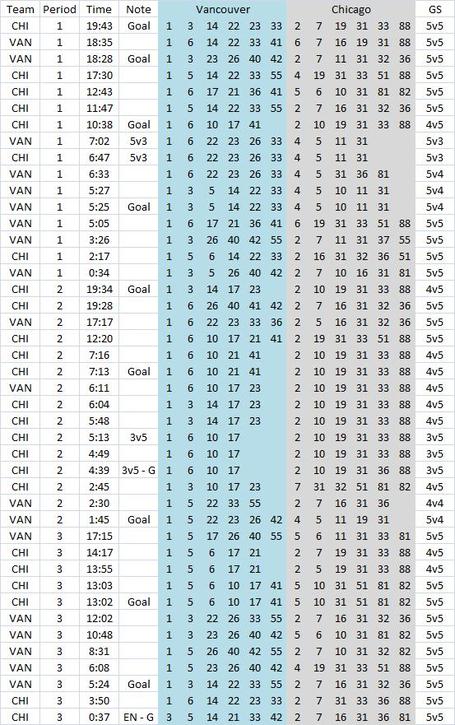 The play was about even when the teams were at even strength.  If anything, Vancouver should have been much further ahead, especially in the second period where they spent a lot of time getting good shots blocked and taking bad shots in the first half of the period.  The team's +30 Corsi and +16 Fenwick at even strength are indicative of this territorial advantage.  Usually with a territorial advantage like that you would expect to generate more scoring chances and more power plays than the opposition.  Instead, the Blackhawks took four minors compared to eight for the Canucks which no doubt turned the game in Chicago's favour.  The fact that Vancouver couldn't kill off any of the penalties didn't help either. 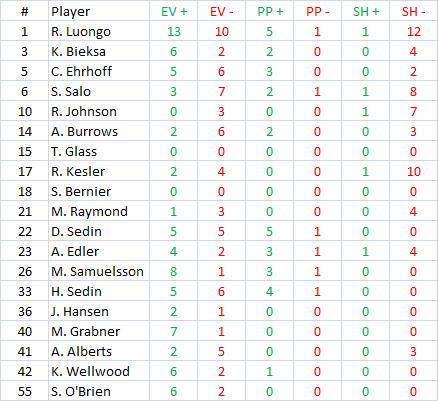 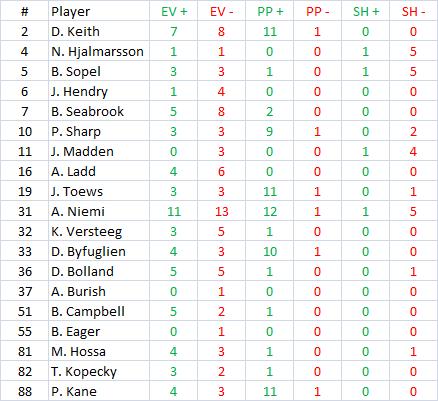 Duncan Keith and Brent Seabrook have gotten a lot of positive press in this series but really haven't been all that dominant.  Either that, or I was being really spoiled with Drew Doughty previously (I know it's a pretty small sample of games but after watching the Olympics and the playoffs, I wouldn't be at all upset if Doughty won the Norris this year, given the other two guys in the running).  The other defenders are clearly a step down from these two, but they both have their struggles at evens, especially if the puck starts cycling around.

John Madden has been an interesting guy to watch in this series.  He's basically the fourth line center who plays both with and against chaff and so far hasn't done all that well.  I've got to think that one of the places that this team is going to save some money in the off-season is by letting Madden go and while it will hurt the depth a bit, he really hasn't been an important cog, at least while I've been watching.

3. Michael Grabner - He was on a very effective line with Kyle Wellwood and Mikael Samuelsson that didn't really have any specific match-up but managed to generate chances against virtually everybody.  In addition to the big lead in chances, Grabner and Samuelsson also tied for the team lead in Fenwick differential (+11) which suggests that they were one of the few lines getting chances out of their territoiral advantage.  It's my opinion that their failure to score in this game was more bad luck than anything else, especially since Antti Niemi wasn't really at the top of his game.

2. Dustin Byfuglien - Another big game for Byfuglien.  I blamed the Canucks for taking all of the penalties but Byfuglien deserves a lot of credit for drawing three of them, all on cross-checks.  The Canucks obviously emphasized making life difficult for Byfuglien and although I'm sure the game was much less pleasant from a personal perspective, Byfuglien did an awful lot to help his team win.  In addition to the three drawn penalties and the one official assist, he was also a force in front of the net on a dominant Hawks power play.

1. Jonathan Toews - A hat trick with two assists along for the ride.  Toews was a force on the power play and pretty good at even strength too (his -1 Fenwick total was second best on the team).  In a game that came down to results on the power play, Toews was a primary driver of those results.

The Barren and Desolate Woman

3. Shane O'Brien - I don't know if he deserves to be here or if it's the coaching staff.  I believe that he was coached to play physically with Byfuglien but two penalties in the first period probably wasn't what they had in mind.  O'Brien seems to have trouble finding a sweet spot between physically ineffective and overly aggressive.  He was mostly the latter in his 9:38 of ice time on Friday night.

2. Roberto Luongo - Six goals is a lot.  As I said above, neither goalie was all that good in this game but Luongo in particular needs to be better.  He wasn't getting a lot of help in front of the net which I'm sure is frustrating for him but the Canucks just aren't going to win games until he starts letting in fewer than three goals, something that hasn't happened in any of the last three contests.

1. Alex Burrows - A really stupid penalty for the second game in a row, I was shocked to see that nhl.com made Burrows the third star.  With his team down two goals he takes an obvious cross-checking penalty and does so in a way that shows no decency toward his opponent.  Cross-checks to the head ought to be penalized harshly, though Burrows didn't hit Byfuglien flush and Byfuglien wasn't injured and it's the playoffs after all, so his malicious intent escaped further punishment.  Well, except for the goal that put the Canucks down by three.  If I had one Alex Burrows related wish, it would be to put Alex Burrows in a Hilary Duff style PSA with Mike Comrie who would lecture him about using offensive language on the ice.  Comedic gold.