"The Shift" In Chart Form

Share All sharing options for: "The Shift" In Chart Form

You're all aware of "The Shift", starring Jason Strudwick and Taylor Chorney by now.  It was possibly the longest shift in the history of the league, at least since teams began to use more than six skaters a side.  Three minutes and forty-five seconds of a Wings onslaught and Jeff Deslauriers has now checked into a shellshock clinic.  In the comments on the article about "The Shift", Bruce brought something up that I decided to run with.  Bruce comments:

An amazing fact about The Shift that Garth pointed out was that Strudwick and Chorney played against every Detroit skater (but just the one goalie :) during that sequence. Check out The Shift chart (courtesy timeonice.com), go to the second half of the second period, find the parallel gigantic bars of 41 and 43, then just grab one and pull it up and down the table, and you’ll see 19 different Detroit players participated in this one sequence. Obviously they don’t keep records of that sort of thing, but I would wager even money that that may never have happened before ever once in the history of the 20-man roster. Play against the whole other team on one shift??

Presented below, in all her glory, is the shift chart from "The Shift".  I've arranged the skaters chronologically as they came onto the ice.  Yes, Garth is correct, all 18 skaters played against Strudwick and Chorney. 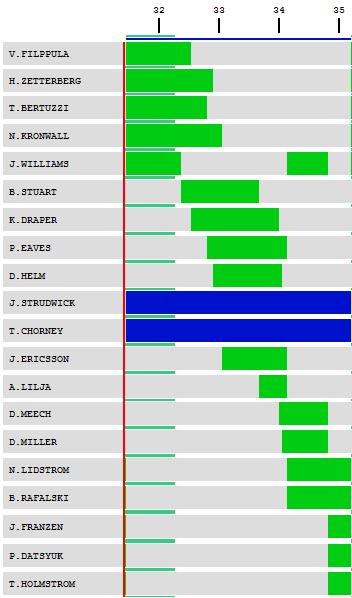 Jason Williams found the experience so nice, he did it twice.  Pavel Datsyuk was probably salivating like a wild dog by the time he was allowed on the ice against them.