Got a chance to go to the game Monday night, courtesy David Staples who had some nice Edmonton Journal seats in the lower bowl. Row 13 just behind the Oiler bench, certainly a different vantage point that allowed one a sense of the interaction between teammates not to mention a pretty good viewpoint on the game itself. I enjoyed David's company and we together enjoyed some NHL hockey, not exactly at its finest as two also-rans limp down the stretch. The Minnesota Wild provided the opposition, such as it was; fresh off a game in Vancouver less than 24 hours before, the Wild gave the impression they'd rather be on the Moon than in central Alberta on a Monday night. Oilers on the other hand put in a solid effort and emerged as deserving 4-1 victors.

The home team winning - on merit - was just the tip of the bizarro-iceberg on this night. Consider some of the unusual events that transipired:

A few details and a pic of that Olympic medal after the jump. 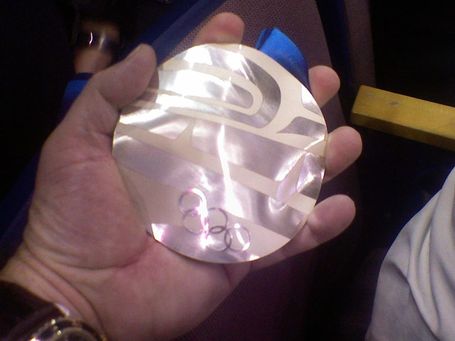 I've been an Olympics junkie since Innsbruck 1964, but not 'til tonight did I get to touch a real Olympic medal. This one belongs to Jenn Heil, the pride of Spruce Grove who was introduced pregame along with Paralympian skiing star Viviane Forest. So happened Jenn was sitting in the box behind our section, and between periods was happily signing ballcaps, programs, and (ahem) ticket stubs while letting wellwishers actually handle the silverware. It's a real beauty. So is Jenn Heil, I hasten to add, a lovely girl with a ready smile and an engaging disposition.

The Oilers line by line:

Potulny came in to centre Andrew Cogliano and Dustin Penner on the newly-formed PCP LIne. We should have thought of this much earlier! The trio had a strong game, with Penner scoring once at even strength and once on the powerplay, with Potulny garnering assists on each, as well as firing 5 shots himself and going 8/10 = 80% on the dot. Early in the first Penner took a sharp feed from Chorney and buried it so completely almost nobody in the building was sure it was a goal. His 30th of the season, a new career high and a nice milestone for Flying Fridge fans like David and myself to enjoy. The line had Oilers best chance in the second when Penner's beauty pass sent Potulny in alone to test Nicklas Backstrom. Then in the third Penner notched his 60th point, slamming home Potulny's rebound just 6 seconds into a late powerplay - faster than you can say "phenylcyclohexylpiperidine".

Moreau and Fernando Pisani flanked Shawn Horcoff in the one line of any shelf life whatsoever, the MPH Line, so named because their initials match that new-fangled Gabe Desjardins stat, Minuses Per Hour. No minuses tonight, but a couple of plusses on Moreau's pair. I said to David after the first one, "Might as well clap, it's his last as an Oiler", but Ethan made a liar of me before the night was done with a second blue collar goal. He was really feeling it tonight, skating as well as I've seen him all year and making things happen in a positive way. Horcoff also had an excellent game, while Pisani battled hard but lost a couple of strength battles of the type Oiler fans are accustomed to seeing him win. That said he led the Oilers in hits for the second consecutive game, with 4. The trio had their usual lousy Corsi (-6 to -9 apiece), but this was in part due to difficult ZoneStarts of +6/-1 defensive to offensive zone, with another 8 in the neutral zone. By eye they had their best game in weeks.

Another newly formed trio, the Faint Hope Line, featured Marc Pouliot between Robert Nilsson and Patrick O'Sullivan. This trio was slightly sheltered in Zone Starts (+2/-3 on a night the team was +15/-7), broke about even in shots with no goals in either direction. All three showed flashes of their undeniable skill, with Pouliot impressing the most with several displays of his size, range and speed. All in all a meh night, which was as good as could be hoped for from this trio.

Finally, there was the Party Line featuring three right wingers (sorry, you have to understand Alberta politics to get this admittedly lame joke): Ryan Jones, Zack Stortini, and Mike Comrie. Surprisingly, Comrie was the one to stay in his preferred position, while Jones flipped to the left side and Zorg slid into the middle. The trio was given a tough ZoneStart assignment of +6/-1 with only 1 in the neutral zone. Stortini sawed off on the dot, winning 4 of those 8 draws, playing a surprisingly competent and low-event game at centre. Shots on goal were just +3/-4 during his 11:46, which as usual was all at evens. I was quite happy with what I saw of Jones, who skated with equal intensity in both directions. (More on him at bottom.) Comrie was the fish out of water in this trio to my eye, really struggling in his own zone and making little happen in the good end in what for him was just a tough night at the office. He had no shots himself, and the team generated just 1 during his 12+ minutes at evens.

No whizzy names for the defensive pairings, who I watched with particular interest due to all the newcomers. There was a very even workload tonight, with Whitney leading the way at just 21:22. Whitney had nowhere near his best game since he's been here but nonetheless impressed me with his presence. He is big, mobile, and strong on the puck. He had a few mistakes, 3 giveaways plus he deflected Andrew Brunette's shot up and over Dubnyk's shoulder for the lone Wild tally of the night. But he did, and does, a whole lot of small solid things right, the sort of things that don't often show up on the event summary. He's also a mean beggar with the stick. I get the sense that this is a guy who will help fill the leadership vacuum on this club. His partner Tom Gilbert continued his recent run of solid results, recording 2 assists. Seems to me Tom's played his best hockey of the season since being paired with Whitney.

The duo of Dean Arsene-Aaron Johnson is a pairing of odd socks. Arsene is a very conservative, defensive player, one who plays a simple game with a bit of a rough edge to it. In short, he's what Strudwick is supposed to be. He stepped up to really belt James Sheppard with the game's biggest hit, then had to face the wrath of the monstrous John Scott. I said to David it'll be a tell if Arsene continues to step up and into Minny forwards after that negative feedback loop, and to his credit he did continue to do so. Johnson on the other hand is a real high-event guy, one who plays a real strong man-to-man rather than zone. He'll chase his guy pretty much anywhere, a trait that led to at least one odd-man rush. He's a real active skater with a distinctive, hunched skating posture that is particulalry noticeable when he is scrambling back into position. Kind of a fun player to watch.

Then there was the "prime pair" of 41 and 43, Taylor Chorney and Jason Strudwick. I saw Chorney's first NHL game in the final week of last season, and I have watched him throughout this season without ever once thinking he'd played a particularly good game. Well that changed tonight; for at least one night he looked like a bona fide NHL defenceman. Made easily 10 or a dozen real strong plays, including the pass to Penner for the first goal, several other sharp passes, a few won puck battles, and a number of strong plays with the puck under pressure, especially in his zone. This guy can really skate, and tonight he was using that skill to advantage. I keep waiting for flashes, assuming that the Oilers must see something they like in this kid even if I can't, and tonight I finally did see him good. Moreover, his partner Strudwick had a real solid game as well. What my eye saw, the stat sheet backs up: the pair had a real tough ZoneStart assignment (+8/-1 for 41, +9/-1 for 43), yet both had positive Corsi and shots differential, with each ending the night +2 on the scoreboard. This has been a terrible defensive pairing for the most part, but I have to give credit where and when it's due. Which is tonight.

Dubnyk had a strong game between the pipes, stopping 25 of 26 shots and unlucky on the deflected one that beat him. He was especially solid in the second half of the first period when Minny really carried the play after Moreau's 2-0 goal and forced a number of good shots through traffic. Once again DD looked bigger in the net than JDD seems to, and a whole lot calmer.

A note on Ryan Jones. Last time I saw him live, that damn Boogaard put him out in the first period, so it was good to see him play a full game. This guy can play. He looked good enough that I'm almost convinced that waiver deal was an extension of the Grebeshkov trade, which makes a helluva lot more sense when seen as Grebs for Jones plus the  second rounder. There was speculation at the time that the deal was so structured so that a little cash could flow in Nashville's direction, and with Oilers having first dibs there was nothing that could go wrong, short of Steve Tambellini improperly setting his wristwatch alarm I suppose.