Share All sharing options for: Canucks and Kings - Series Review

Well, it was an exciting series that didn't quite turn out the way I would have hoped.  The Kings lost the series of course but even my secondary concerns didn't go well.  The primary secondary concern was watching all of those old Oilers to see how they're doing.  And, as it turns out, they're sucking.  It was like... well, watching the Oilers.  Matt Greene was a part of the problem on defence, Jarret Stoll was consistently poor - not downright bad so that you're shaking your head at him, but definitely poor - and Ryan Smyth not only didn't score but wasn't even the guy who caused a goal by interfering with the goalie.  Damn that Dustin Brown.  Anyway, after the jump I'll take a look at the scoring chances and some of the reasons I think the Kings lost the series (because we all know the Canucks didn't win it).

I'll start by giving the links to each game in case you want to be reminded of any particular contest when looking at the totals below: 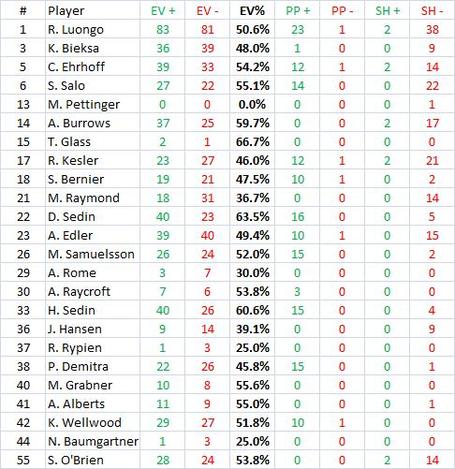 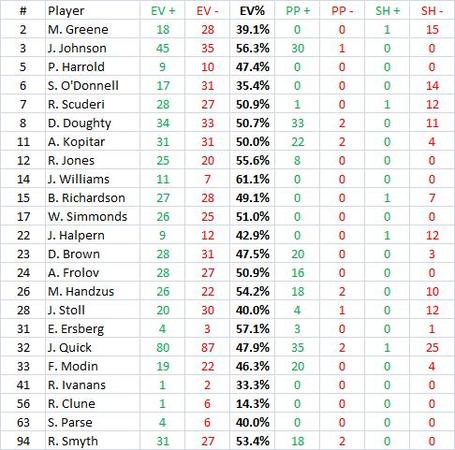 Some players didn't make it onto my game-by-game rankings for being particularly good or particularly bad but still stand out when we sum everything together.  Basically, I wasn't lying when I said that Jarret Stoll and Matt Greene sucked.  The other guy I should mention from the Kings who won't get mentioned below is Jack Johnson.  He had a really good series, both at even strength and, especially, on the power play.  I understand that there's some consternation about his game but if Johnson can grow into a dominant power play guy who plays a physical game while taking second defensive minutes at even strength, well that's a very valuable player.  Especially when you'll have Drew Doughty covering his ass for the next two decades.

For the Canucks, I won't split out the numbers, but both Burrows and Samuelsson did quite a bit better with the Sedins than they did without them so, keep that in mind.  The guy who really stands out though is Kyle Wellwood because I know that we was getting some significant minutes against the Kings' first line.  That's a really good performance from him.  On defence, the Canucks' had strong even strength performances from Sami Salo, Christian Ehrhoff and - despite the negative chance differential - Alex Edler.  Kevin Bieksa, on the other hand, really struggled.  He took a lot of penalties and got out-chanced.  The Canucks reallly need him to be better against the Blackhawks.

Finally, I'll take a look at some of the key contributors in this series based on the rankings I did after each game.  A third star ranking is worth 1 point, second star 2 points and first star 4 points.  The same is true of the reverse stars.  We'll look at the top five in each category with any ties being broken by which player appeared on the most lists.

T4. Michal Handzus - 2 points (2 appearances) - He was outstanding in the series in his match-up against the Sedins.  When the Kings were at home Terry Murray went to this match-up religiously and it was very effective in both Game 3 and Game 4.  In Game 6, Handzus went off the rails a bit (one of his appearances is as a reverse three star) but he was a big reason that the Kings had a chance in this series.  In my opinion the line was at its best when Handzus had Fredrik Modin and Brad Richardson on his wings, so that might be something worth remembering for next season if all three players end up back with the Kings.

T4. Roberto Luongo - 2 points (2 appearances) - Like Handzus, one positive mention and one negative but the first star in Game Six is enough to propel him onto this list.  I thought he was very good throughout the series.  His EV save percentage is actually third among playoff goalies at .942 behind only Ryan Miller and Brian Boucher.  Now, that means his PK save percentage is total garbage and that is in fact the case.  Luongo's .730 in the playoffs is bad.  Really bad.  But I don't think Vancouver fans should be worried.  He's still solid at EV, and that PK number should bounce back.

3. Ryan Kesler - 4 points (1 appearance) - In truth Kesler really wasn't all that good in this series.  There were times - like Game 5 - when he was dominant but other times when he looked out-classed by the Kings, and it wasn't always their top guys.  His individual play on the penalty kill didn't strike me as being a huge problem, but as a unit, they were pretty bad and if they're the same against the Hawks, they're toast.  He had his moments in this series, they'll need to be a lot more frequent in the next one.

2. Henrik Sedin - 7 points (3 appearances) - A star in three of the Vancouver wins, Sedin definitely showed that he's a valuable player.  Not the most valuable player in the league series, but a valuable one.  Henrik and Daniel Sedin dominated at even strength, especially in the first two games.  When the Kings lost those two third period leads, Henrik Sedin was leading the charge for the Canucks.  His (line's) play is probably the biggest (positive) reason the Canucks won the series.

1. Drew Doughty - 8 points (2 appearances) - He is a fantastic player.  Doughty and Scuderi were often matched with the Sedins and yet both posted a positive chance differential.  The Sedins usually had their best chances when they were able to avoid that match-up.  And, unlike Scuderi, Doughty isn't just good on defence.  He's also great at picking his spots on offence and is one of the big reasons the power play was singing such a happy tune all series long.  At twenty years old, he's one of the most complete defenders in the game.  That's just sick.  I'd bet that if there was a re-draft today, Doughty goes first overall in 2006 even though the guy that got picked ahead of him just won the Rocket Richard.

5. Sean O'Donnell - negative 3 points (2 appearances) - Holy hell were he and Matt Greene terrible.  40% is basically as bad as it gets in terms of scoring chances for regular players over a season.  O'Donnell put up 35.4%.  God damn that's bad.  It he were taking on the toughs you could make an excuse for him.  But he wasn't.  And you can't.  I have no doubt at all that one of the reasons the Kings lost this series is that they only have three decent defenders.  O'Donnell and Matt Greene (that contract is just terrible) were supposed to be number 4 and 5.  They couldn't get it done.

T3. Canuck Fans - negative 4 points (1 appearance) - They didn't have a big outcome on the series so in that sense they don't belong here.  And yet, we all know that they belong here.  Telling the ref he sucks when it's actually your PK, acting like there's a conspiracy against your team... uh... tiresome.  I feel like the Canuck fans throwing popcorn on the fans around them when Burrows scored the empty-net clincher are perfect examples of why the fans deserve to be on this list.

T3. The Canucks' Penalty Killing -  negative 4 points (1 appearance) - The most surprising thing is that this only made one appearance.  The Canucks were very, very bad on the PK, especially over the first four games.  Things started to turn around in Game 5 and Game 6.  The Kings only registered nine chances in those two games even though they spent 15:15 killing penalties.  That's not perfect, but it sure is an improvement on the 29 chances allowed in 24:21 that had come before.  The Canucks will need the penalty killing to continue to improve if they have any hope of beating the Hawks.

2. Andrew Alberts - negative 5 points (2 appearances) - Not as big a factor as the penalty killing, obviously, but he did play really poorly in Games 1 and 2.  Most of that was just taking needless penalties despite playing limited minutes.  He was better when he came back in and in terms of scoring chances he actually held his own.  If he can avoid penalties, he's a serviceable third pairing defender.  In both of the last two seasons, he's taken 1.2 penalties per 60 minutes of ice time which isn't a low number but, honestly, some of his hardships early on the series aren't really a reflection of what you might expect in the future.

1. Jonathan Quick - negative 7 points (4 appearances) - One of those appearances is positive, so this number could actually be worse.  The Kings didn't even win the game he was good in, so that contribution went for naught.  In both of those home games where the Kings blew the lead, Quick was a goat.  I don't know that Jonathan Bernier would have been any better, but I can say with some confidence that the biggest reason the Canucks won this series was the play of Jonathan Quick over the last three games.

Note: For all you Canuck fans who enjoyed this series, I'm going to be tracking chances and writing recaps for the Canucks and Blackhawks in the next round.  And for those that follow the Kings, I'll see you at the same time next year and promise not to be offended if you don't bring Matt Greene.  See you then!