Games five and six were the two most lopsided games of the series by the scoring chances but had two very different outcomes on the scoreboard.  The Kings were downright dominant in the first period and held on through the second but for the second time in the last three games they were unable to hold a third period lead and unable to even get the game to overtime.  Their best chance to achieve the latter in this one came with just over a minute left.  Anze Kopitar sent a hard pass across to Jarret Stoll who had a wide open cage if only he could corral the puck.  But the pass was too hard or in his skates or bounced on the soft L.A. ice or who knows what.  The point is, he missed it completely.  The puck went all the way to the boards where Alex Burrows promptly picked it up, put it into the empty and followed with the douchiest tribute for a fallen teammate that a person might actually still go ahead and do.  You'd think it would be impossible to make something like paying tribute to someone who's passed away into an annoying showboat move but... Alex Burrows is a talented guy.  Scoring chances and more after the jump. 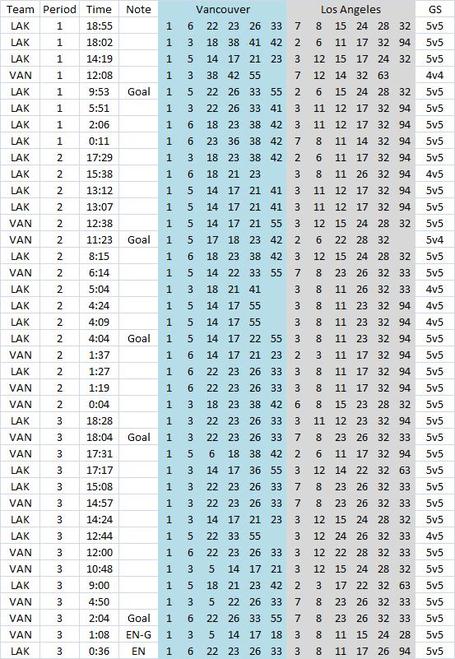 CBC mentioned that they had the chances at 10-1 Los Angeles after the first so my numbers are flattering to Vancouver if anything.  As I said above, the Kings were dominant in the first period but some fantastic play from Luongo kept them in the game and the teams went off to the first intermission with only one goal separating them.  Once the Canucks tied the score 1-1 about half-way through the story changed.  From that point on the Canucks out-chanced the Kings 12-9 at EV (and that includes the Kings second goal which was pretty much a power play tally) which fits the pattern of the rest of the series a whole lot better. 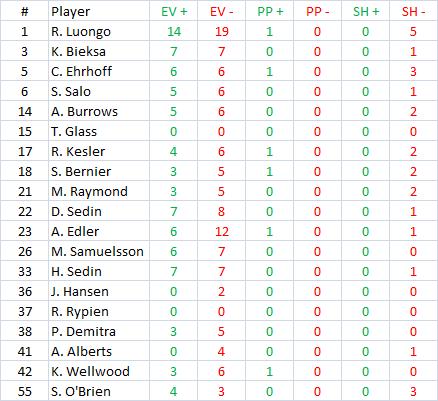 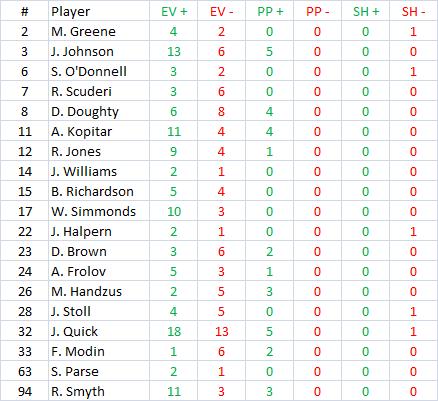 With Andrew Alberts only getting one shift in the third period, everybody else needed to pick up the slack.  Interestingly, it really was everybody as the other five guys all played between 18 and 26 minutes on the night.  Alex Edler probably had the most interesting game with a whole lot of pucks flying toward his net while he was out there but he still ended the night +1 and with a PP assist on Bernier's (wrong Bernier) goal that got the Canucks on the board.  The other player I wanted to note was Shane O'Brien who played more than he usually does and ended up being the only Canuck with a positive chance differential.

Those Born of God

3. Henrik Sedin - The best player on the Canucks' best line. In Vancouver, the Sedins had been finding comfortable match-ups and out-chancing their opponents handily.  In L.A., they'd been forced to deal with Michal Handzus and Fredrik Modin and hadn't been able to consistently generate chances despite the gaudy boxcars.  This game was no different in terms of the match-up (except that Dustin Brown had replaced Brad Richardson from the last game in L.A.) but the results were better.  Although the Samuelsson and the Sedins didn't out-chance overall, they were the only three players who generated a positive Corsi number on the club.  Further, if the Sedins break even at 7-7, odds are they've had a decent game.  I know I'd prefer them at 7-7 than at 2-2 if I were their coach and we'd played a lot of the game coming from behind.

2. Anze Kopitar - I called him out for poor play after last game and he delivered big-time.  In previous contests Kopitar and Co. had been having some trouble with Wellwood's group (of all people) but last night they put the boots to them.  This was a bit of a problem for the Canucks since they didn't use Rypien or Glass pretty much all gmae.  Not that the fourth line would help a whole lot, but it's a lot easier to promote Grabner mid-game if someone isn't playing well than it would be to elevate Rypien.  At any rate, even when the Cancuks got Kesler on Kopitar, he wasn't able to do much better than Wellwood.  Kopitar also deserves some major props for coming back into the game after he was injured on a play below the goal-line when he and Kesler caught skates.  He very nearly set up the tying goal, but the pass just didn't connect.  Nonetheless, this was a very note-worthy performance.

1. Roberto Luongo - He played his best game of the series tonight and it isn't close as far as I can recall.  He kept his team close in the first period and made a couple of remarkable saves throughout the evening.  The save of the game for me was the glove save off of Ryan Smyth, but there were some other dandies mixed in.  You kind of knew that Luongo would play at a very high level at least once in the series; unfortunately for the Kings, it came in a game that they actually carried the play.

Those Committing the Sin That Leads to Death

3. Dustin Brown - I know that he drew a penalty but he also took two minors, one of which got the Canucks back into the game.  In addition to that, he was on the ice for the next two Canucks' goals as well.  The line he had been playing on was effective in checking the Sedins all series... until tonight.  I know that Brown is a hitter but he also does a lot of flopping which isn't particularly endearing.  I definitely liked the line better when it had Brad Richardson.

2. Michal Handzus - This was by far his weakest game of the series.  Whereas in games three and four he'd been dominating the match-up with the Sedins and in game five he rolled over everyone, the he just wasn't up to the task this evening.  On top of that, he was one of the main culprits on the winning goal.  Doughty directed him specifically over to Daniel Sedin but Handzus decided to leave him alone.  A few seconds later, the puck was in the back of the net.

1. Jonathan Quick - With a bullet.  This was like watching Jeff Deslauriers.  Puck in your crease?  Maybe you should argue with your defender about whether or not to cover.  Need to play the puck behind the net?  May as well kick it.  That didn't work out?  I guess passing it to the Canucks will be better.  Shot from the point with no screen?  I guess we'll let the post handle that one.  Three goals on fifteen chances isn't necessarily bad, but Quick sure did look bad doing it and the tying goal was pretty weak.  It broke my brain all series that Bernier wasn't on the bench.  Personally, I would have given Bernier the start last night but even if you were determined to let Quick see it through, what if Quick had gotten hurt?  You're stuck with Ersberg.  Why wouldn't you have your two best goalies in the line-up at all times?  It was a weird decision all series long.

Note - I'll have the full series data updated in a few days and will continue tracking scoring chances for the Canucks throughout the playoffs (I might be busy toward the end of May, but I don't think that'll end up being a problem).