The game was tied at one in the first period and the Canucks had iced the puck, their fourth line trapped in the defensive zone.  I rubbed my hands with expectant glee hoping to see Anze Kopitar bound over the boards.  And it was so.  And I saw that it was God-damned awful.  The Canucks immediately carried the puck out of their zone, had Rick Rypien skate off for Ryan Kesler and scored the goal that would put them ahead to stay.  And the horn sounded - the first period.

The game was still two to one in the second period and the Kings had iced the puck, their fourth line trapped in the defensive zone.  I covered my eyes, knowing that the Sedins would be on their way to the dot.  And it was so.  And I saw that it was God-damned awful.  Within ten seconds Henrik Sedin had tied up the face-off, Samuelsson had picked up the puck and passed it off to Daniel behind the net who promptly came out front and scored.  And the horn sounded - the second period.

In the third period, my emotional involvement took a break. Scoring chances - the only reason I finished watching - and more after the jump. 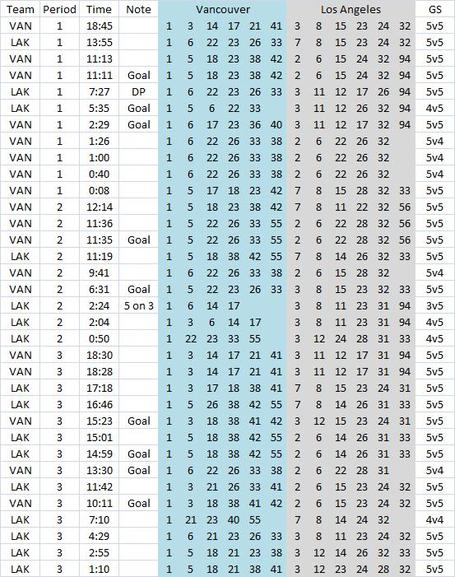 It looks closer by the totals than it was on the ice.  The Kings generated exactly three scoring chances at even strength in the first two periods and with the game essentially over at 5-1 the Canucks held a 12-5 lead in even strength chances.  At that point, the Canucks were playing out the clock and the Kings got a few chances.  There's been a lot of talk so far about the Canucks' putrid penalty kill.  And deservedly so.  With ten power play goals against in five games, you'd think the series was already over.  Not only is that not the case, they're actually ahead.  The big reason?  The Kings can't score goals at even strength.  They have five even strength goals in total.  Part of that is bad luck (they've shot 5.4% at EV so far in the series compared to their season average of 8.1%) but most of it is not generating enough shots and scoring chances. 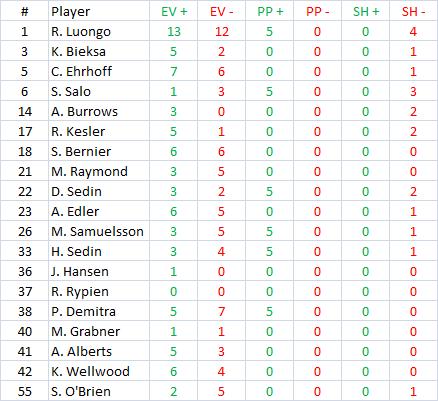 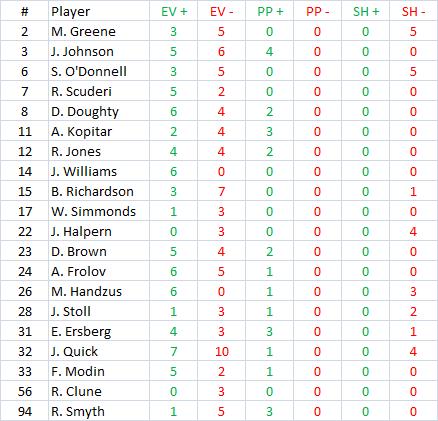 I wasn't a big fan of Terry Murray's changes.  He had one line going last game: Handzus-Modin-Richardson pounded on the Sedins.  But Murray decided to break them up and insert Richardson at center to get Justin Williams back in the line-up.  Handzus-Modin-Williams worked just fine but played almost none of the game against the Sedins (which was incredibly frustrating; at least try to get the match-up that's working for you).  Richardson, on the other hand, wasn't as effective at center as he had been on the wing.  Meanwhile, the first line continues to struggle.  I know it didn't work in game one against the Sedins but the trio of Smyth-Kopitar-Williams has done very well in the regular season.  If Williams was to come back into the line-up it seems logical to me to put him back with those guys, especially since they haven't exactly been lighting it up with Simmonds.  If it were up to me, Williams would be back with Smyth and Kopitar in game six to take on some lesser lights, Richardson would move back onto the checking line for Sedin duty and both Jarret Stoll and Jeff Halpern would be allowed to play center.

3. Daniel Sedin - Their line didn't generate a lot of chances at even strength but they did a great job of eliminating Smyth and Kopitar completely.  Daniel himself scored the goal that put the Canucks up two and was in on the goal that put them up three to seal it.  They were effective all night on the power play and got rewarded for it in garbage time.  I was tempted to put Mikael Samuelsson here since he scored twice but his first goal was from a pretty poor shooting area (Healy criticizing the Kings for not covering that area during the intermission was kind of funny, they actually were pushing the play to the outside) and his post-game interview was bad enough that he almost (not really) made the bottom three.  At any rate, it was a good game for Daniel and for the line as a whole.

2. Henrik Sedin - Yep, a good night for the line as a whole.  Henrik is a wonderful passer and ended the night with two assists.  Another of the more impressive parts of his performance was his face-off prowess.  He was 19 of 23 overall and a spectacular 9 of 9 in the offensive zone.  Every time the Sedins were out for an offensive zone draw, they started with the puck.  I know there's some chance I'm praising luck here (although if you're 50/50 to win a draw, there's only a 0.2% chance that you'd get nine in a row by chance) but I did notice them with the puck in the offensive zone an awful lot.  At any rate, if you're trying to defend against the Sedins, losing every face-off in your own zone is a great way to lose.

1. Ryan Kesler - He was great, especially in the first period.  He really hasn't been very good in the series, especially when you consider the fact that the Sedins have done quite a bit of power-v-power at home.  But tonight Kesler took advantage of some of his softer match-ups.  He drew an assist on the go-ahead goal and drew a penalty shortly thereafter with the game's result still in doubt.  When the Canucks' were killing the five-on-three, Kesler was out there to kill it off (the Canucks had both Kesler and Burrows killing that five-on-three, I assume because a defender was coming out of the box; I don't recall seeing two forwards killing a five-on-three before, but it seemed to work).  He led the team in chance differential at even strength (+4) and had a strong Corsi differential too (+6).

3. Jonathan Quick - He got beat on a wrap-around and he got beat on a shot that wasn't close to my normal "scoring chance" area, both in the second period with his team already down a goal.  Then he got the hook.  You know, before his replacement got the hook.  He wasn't the reason they lost but when he was pulled in the second he'd given up 4 goals on 13 scoring chances which is pretty poor.  This follows an equally poor third period in game four.  I'm keeping my eye on the transaction wire because if it were up to me there would be a different Jonathan in net on Sunday.

2. Ryan Smyth - One of the main reasons I threw my support behind the Kings was to cheer on the ex-Oilers.  They haven't been at all impressive.  Ryan Smyth was bad in this game.  He took two minors, but that's not the problem.  The first one was the kind of call you need to accept once in a while if you employ Ryan Smyth and he even made up for that one by drawing a penalty later in the period.  The second one?  Well, when you're down by four, I'm not convinced falling on top of Luongo is something to get too upset about.  No, the problem is the rest of his game.  It sucked.  He's supposed to be a part of the most dangerous line on the Kings and he was on the ice for one scoring chance (it was on the same play where he drew the penalty; he himself took a shot that missed the net).  One.

1. Anze Kopitar - This is the best forward on the team.  Supposedly.  Yep, the best one.  And now it's been three straight games of very little offence.  When they had the match-ups in games three and four, Kopitar couldn't produce.  Back in Vancouver against the Sedins?  Even worse.  When you lose 7-2 there are plenty of people to call out.  Anze Kopitar is at the top of my list.  He had better be a force in game six.