Everything about the first period just felt so right.  The Kings were dominating at evens for the first time in the series and still found time to add to the delightful comedy that is the Canucks' penalty killing unit by scoring on their only power play of the period.  Even after the Canucks managed to start the second by tying the game, they still hadn't shown much at even strength and when the Kings got another power play and scored for the sixth consecutive time, it would have taken all of the energy in the world not to laugh at their misery.  I didn't have the strength.  But then there was doubt.  Vancouver tied it again in the second before the Kings regained their one-goal lead before the second intermission.  By the time the Kings had squandered four good chances in the first half of the third period I was nervous like a fourteen year-old boy making his first play for third base.  A three to one series lead seemed so close at hand.  And like that, (...), it's gone. 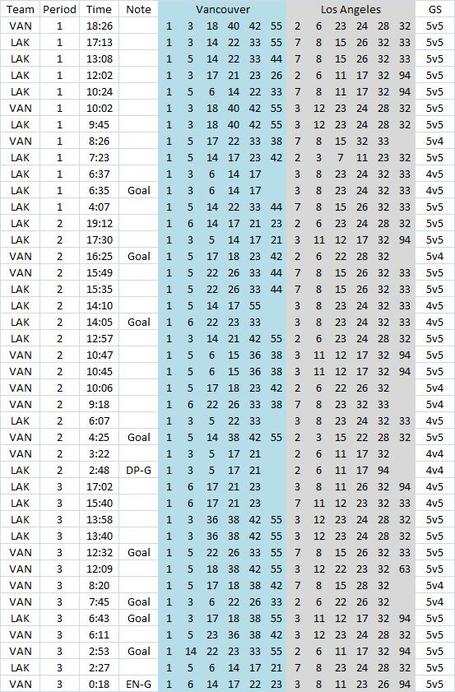 The first period was a wonder to behold.  The Kings controlled the play all period and when the puck did come into their zone, the Canucks weren't able to get to a dangerous scoring area.  The PK was working, the PP continued to be touched by God and after the green light lit up they left the ice with a one-goal lead.  But they couldn't keep it going.  Frustrating.  Looking at the game as a whole the Kings did manage to out-chance the Canucks at even strength but I should mention that the Canucks won the territorial battle.  Although they had trouble generating chances when they were in the Kings' zone, they spent a lot of time there.  This reality was especially true in the first half of the third period when the Kings would be playing the Canucks along the boards in their defensive zone and then getting a chance themselves on the counter-attack.  But the Canucks' team Corsi of +19 at even strength does imply that they were going to get their chances.  Spend enough time in the offensive zone and you will.  And once they did, they were going in.

I also wanted to comment briefly on the Canucks' PK which is still struggling despite breaking the curse before it reached the most perfect number (once they made it to six I started frantically looking for a good Philo reference... alas, it was not to be).  That ridiculous streak aside, two goals and seven scoring chances in under six minutes is still really bad.  On the first goal, the Canucks were even kind enough to illustrate my point about being poor in front of the net.  Thanks guys!  I'm sure that helped everyone understand one of your problems a little bit better!  On to the individual chances: 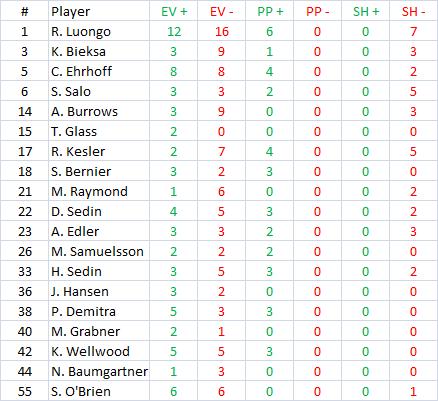 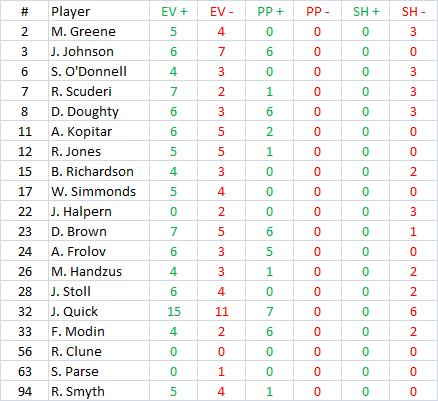 The line of Handzus, Modin and Richardson had another great game matched against the Sedins.  They were out for 70-80 percent of the Sedins' even strength ice time and  through two periods they were up 4-1 in chances in the match-up.  Although they ended up getting scored on in the third (the Samuelsson goal), out-chancing the Sedins 4-2 is a great night's work.  I can only hope and pray that Terry Murray goes hard after that match-up when he can for Game Five because the Sedins just destoryed the Kings in the first two games in Vancouver.  The Kopitar line was better in this game but my goodness did they ever look bad on the last goal.  Wayne Simmonds with the theatrical dive behind the net followed by Ryan Smyth losing a puck battle and Anze Kopitar playing low enough in the offensive zone to give the Canucks a 4-on-2.  Not pretty guys.

Prepared in Advance for God's Glory

3. Pavol Demitra - Go Slovakia!  Miroslav Satan puts home the overtime winner while Pavol Demitra plays his way back into a meaningful role.  In the first period Demitra only played 2:59 and if the night before was any indication he probably wasn't going to get too much more.  But by the end of the game Demitra had played 15:45, drawn a penalty, registered the Canucks' second goal and led the team in chance differential.  On a night that saw Alex Burrows, Ryan Kesler and both Sedins struggle to varying degrees, the Canucks needed some of their other players to step up.  Demitra (and Kyle Wellwood - the two were often playing together) did just that and both guys deserve to be recognized for their positive performance.

2. Christian Ehrhoff - This was apparently a high event game for Ehrhoff but I noticed more of his good plays than his bad ones, especially in the offensive zone.  He scored the first goal for the Canucks on the power play (that's his goal in the picture) with a great low shot after creeping in pretty far from the point.  On the second goal, he picked up an assist with a beautiful pass that sent Demitra and Wellwood in two-on-one with the Kings in the middle of a bad change.  On the third goal, it was Ehrhoff who gained the zone, dished the puck to the wall and then provided a screen for Michal Samuelsson.  Ehfhoff also managed to take a few shifts on the PK without getting scored on, a nice accomplishment in this series.  And all of this while adapting to a new partner seemingly every second shift.  A very good game for the German with the wide range of skills.

1. Drew Doughty - Yeah, yeah, -2.  One of those came on the empty-netter and the other was Samuelsson's beautiful tip from pretty far out.  I don't know that Doughty really should have done much differently on either play.  At any rate, he was a very effective player yet again.  As I mentioned above, there was a lot more time in the Kings' zone in this game which is why I thought to give a defender the nod over the Kings' checking forwards.  The pairing of Doughty and Scuderi have done a good job on the Sedin line over the last two contests and tonight was particularly good.  Sure, Henrik scored the winner but that was against Sean O'Donnell and Matt Greene. Doughty won that battle for most of the evening and he made the Kings very good power play hum.  The more I see him, the more I like what he brings to the table.

Objects of Wrath Destined for Destruction

3. Sean O'Donnell - Two horrific plays to go along with a putrid series overall land the veteran defender in third spot. Both mistakes (be careful not to say "errors") found their way to the back of the net which, of course, doesn't help.  In the first case, he made an atrocious change after making an abominable give-away which lead pretty directly to Pavol Demitra scoring the Canucks' second goal (that Ehrhoff pass?  You may as well give O'Donnell the second assist for all the zeal he showed defensively.  Just awful.  In the second case he was made to look the fool by the Sedin brothers as they drew him away from the middle of the ice when Henrik worked a give-and-go with Daniel Sedin on the near boards.  The winning goal was scired within seconds.  If the Kings are going to win two of the next three games, I think O'Donnell is going to need to be better.

2. Alex Burrows - Holy hell was this guy bad.  After the first period the chances read 5-0 at even strength for the Kings with Burrows on the ice.  On the penalty kill, his largest contribution was guarding nobody in particular so that he could have an excellent view of Drew Doughty scoring the game's first goal.  I'm sure that his only regret is forgetting the camera.  Burrows started the second period by trying to draw a penalty but all he got was another minus in the scoring chance column when the Kings took the puck to the net.  He was the only Canuck to post a negative Corsi number (-2) and his -6 chance differential would be worse if not for the empty-net goal.  Excluding that empty-netter, Henrik Sedin's chance differential was +1 without Burrows and -3 with him.  In traditional plus/minus Burrows ended the night +2.  It was about the worst +2 you could imagine.

1. Jonathan Quick - Roberto Luongo made some saves.  Jonathan Quick didn't.  I think the guy most frustrated by that is probably Matt Greene.  On two separate occasions Greene took away the pass on a 2-on-1 and on two occasions the puck ended up in the back of the net (Demitra and Sedin).  That's definitely not the kind of positive reinforcement Matt Greene needs.  On top of that, there were two big blasts from the high slot that beat Quick and on one of them he had a clean look.  None of the goals were soft but you need to make a save.  The Canucks only had six chances in the third period and they scored on three of them.  None of them were rebounds.  Quick needs to be better.