The Kings were slow out of the gate for the third consecutive game which is starting to get a bit tiresome.  But likely not as tiresome as being on the wrong end of a close judgment call for the second game in a row.  Lordy.  I understand why the league disallowed the goal that would have brought the Canucks within one (Bob McKenzie's take is particularly helpful in outlining the thought process) but I myself likely would have made the opposite call and having that call go against you would be a tough pill to swallow for any fan. Even Mike Murphy himself almost acknowledged that it was a "good" "bad call" when he said that there "wasn't a distinct kicking motion" in an interview on CBC.  Of course, he also believed (correctly, IMO) that Sedin was trying to put it in with his foot and it looks like that intent was what made it no-goal.  Of course, the Canucks wouldn't have been in a hole if they hadn't already allowed three power play goals and a softy at even strength.  I've noticed that Luongo sometimes (always?) crosses himself before games.  Given the way he's played in L.A. this season, maybe he should start hedging his bets. 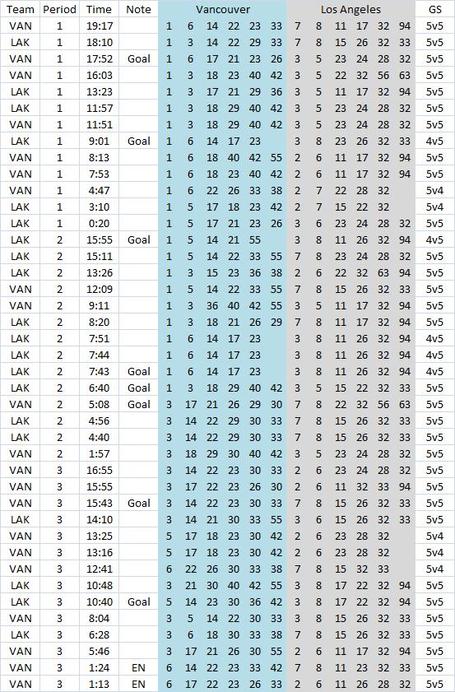 The second period was the strongest period of the series for the Kings by far, both by the chances (10-4) and by the scoreboard (3-1).  Although they were again out-chanced in the game overall, the Kings were leading 20-19 before the Canucks pulled the goalie for the last two minutes and, frankly, with a two-goal lead through most of the period, you shouldn't expect them to push the play.  Teams tend to get out-chanced when they sit back, and teams tend to sit back with the lead so that 4-5 differential in the third period (at EV, both goalies in) is actually very good.  Still, it sure would be nice to see the Kings win the chances battle at EV one of these games.  Next up we have the individual chances: 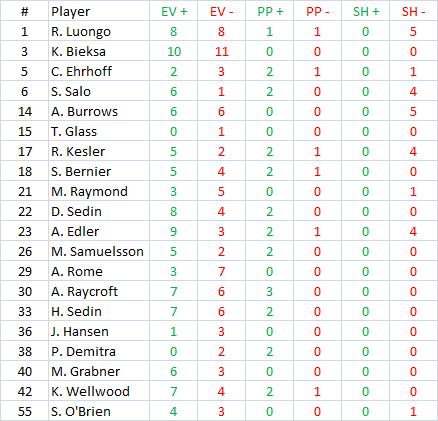 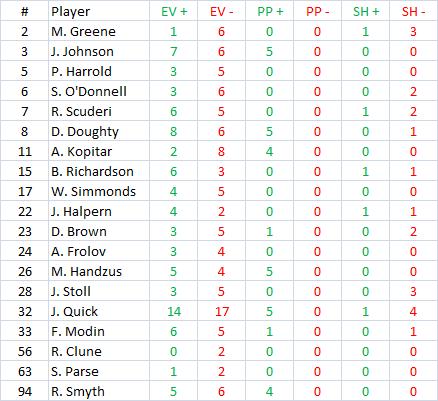 This time it was the Canucks' turn to make some changes to the line-up.  Andrew Alberts and Rick Rypien were replaced by Aaron Rome and Tanner Glass.  Glass looked fine enough but that change isn't likely to make a big difference on the outcome.  The flip from Alberts to Rome is more interesting.  I'm pretty confident that Alberts is the better player but he was so bad in the first two games that it would've been difficult to justify keeping him in the line-up.  Nonetheless, Rome looked over-matched.  I know he's just getting back from injury, so maybe he'll be better going forward but he was exposed a few times last night (especially on the fourth goal).  On the Kings side, this was another tough game for the Greene-O'Donnell pairing.  I know fans in Edmonton sometimes pine for "Matt Greene in his prime" but, good gracious, he still looks bad to me.  These guys aren't a shut-down pairing since they don't take on the toughs but they're still getting pilloried.  Yuck.

On the Way of the Righteous

3. Mikael Samuelsson - He was usually out there on a very effective line with Ryan Kesler and Mason Raymond.  That group accounted for the first two Vancouver goals, the second of which was scored by Samuelsson himself and gave the Canucks a much needed lift heading into the intermission.  That said, "Mikael Samuelsson" is a stand-in here for "Ryan Kesler at EV" because it was really Kesler driving the results (and flat-out dominating in the FO circle; he took 32 of the 61 draws and won 72% of them).  But I refuse to explicitly recognize anyone that was a part of the rather awful penalty killing unit the Canucks trotted out in the first two periods so Samuelsson gets the nod.

2. Brad Richardson - Richardson was on the ice for just over thirteen minutes at even strength.  Over eleven of those minutes came against Burrows and the Sedins.  Yet he won the scoring chance battle at even strength 6-3.  Despite not playing on the power play - he did draw one though - he lead the Kings in shots on goal (5) and scored a goal himself on a nifty steal to put the Kings up 4-1 in the second.  He didn't get a lot of time on the penalty kill but when he did he was effective.  The one SH chance was actually Richardson's as he took the defender wide to make a shot for himself.  He was physical.  He was fantastic.

1. Michal Handzus - Handzus was Richardson's center and also had a very good outing.  The other winger on the line was Fredrik Modin who also drew a penalty and played well. The defensive pairing that was matched against the Sedins most of the night was Doughty and Scuderi but I decided to recognize the forwards because of the way the Sedins were shut down. For the most part, these forwards weren't limiting chances by keeping the Sedins to the outside in the defensive zone (although they did that too) but by making sure the puck was in the offensive zone and working the cycle.  They basically out-Sedined the Sedins.  The only reason I gave Handzus the nod for top spot over Richardson is his work on the PP where he potted two of the three PP goals and got an assist on the other.

Following the Path of Wickedness

3. Anze Kopitar - He was great on the power play so I'm hesitant to put him on the list but he needs to be better at even strength.  With Modin, Richardson and Handzus providing cover from the Sedins (Kopitar played more against every other Canuck forward than he did against Burrows and the Sedins) the Kopitar line needs to produce.  Had they broken even, it would've been a disappointment.  Getting out-chanced 8-2?  Unacceptable, even if it was 6-2 before the empty-net sequence.  Before that sequence he was out-chanced 1-0 by the Sedin line, 2-1 by the Kesler group and 3-0 by the Wellwood trio.  His other chance for came against a jumbled group of Canucks' without a center.  Anze Kopitar and the rest of his line need to be able to outplay Kyle Wellwood.  Just do.

2. Roberto Luongo - He looked especially bad when Brad Richardson stole the puck from Aaron Rome and scored the Kings' fourth goal.  There's plenty of blame to go around on that one (Wellwood, Rome) but the shot was from a poor angle and beat Luongo five-hole.  Had Luongo made some brilliant saves earlier, a softy might not be so galling, but he didn't.  He couldn't stop the screened shot on the first goal or control the rebound effectively on the second or third.  They weren't "his fault" exactly, but you need to have your goalie make some difficult saves if you're going to win, especially if he can't make the easy ones.  Four goals on eight chances is awful.

1. The Canucks' Penalty Killing - I couldn't decide on any one player because so many of the regular penalty killers played so well at EV.  But this PK deserved the bottom slot.  In my opinion the big problems are coming down low with the Kings getting too much traffic in front of Luongo and having easier access to rebounds than they should.  The main culprits in this regard were Salo and Edler who seem to be having a hard time controlling the front of the net.  Various commentators have been saying that the Canucks really miss Ryan Johnson on the PK.  I kind of doubt it.  Having a fifth regular forward helps but Johnson has the worst shots against rate among regular Vancouver penalty killing forwards this season and he wasn't any hell the year before either.  The guy they really seem to miss is Willie Mitchell who has been a solid penalty killer in terms of shots against both of the last two seasons.  I suspect that he's also much better at clearing forwards from the front of the net.  Either way, the Canucks need to find a way to convince their defenders to be more active when it comes to gathering rebounds and clearing traffic.