The game began with a five minute lull but quickly degenerated into a thorough thrashing reminiscent of the first period of game one.  By the time the game was ten minutes old the Canucks had outchanced the Kings 9-4 and this time Jonathan Quick couldn't hold Satan's minions at bay.  Once the second puck was behind Jonathan Quick I began to curse myself for cozying up to this group of losers after finally being rid of the embarrassment that was the 2009-10 Edmonton Oilers.  The Canucks were toying with these buffoons, getting the puck deep and either putting on the pressure or using the 2-1-2 to force the Kings into slamming the puck around the boards before they promptly stole it back - they knew exactly where it was going after all - and continuing the attack.  It was going to be a long fucking night.

Except that a funny thing happened.  The Kings started getting some zone pressure of their own and working the cycle, enabling secret double agent Alberts to take his second unnecessary minor penalty of the game.  The Kings didn't score on the power play, but they did get some chances and headed to the dressing knowing that those last ten minutes had seen them control the play.  The second began with more of the same and the Kings managed to tie the score with two goals in under a minute, including their first - and only - EV marker of the series.  The first goal definitely drew a smile but when the second goal found a way past Roberto Luongo my excitement grew.  By the time Anze Kopitar scored the winner in overtime, well, there was cheering and dancing and grinning ear to ear. Yes, I am emotionally invested after only two games, thank you very much.  Scoring chances and further thoughts after the jump. 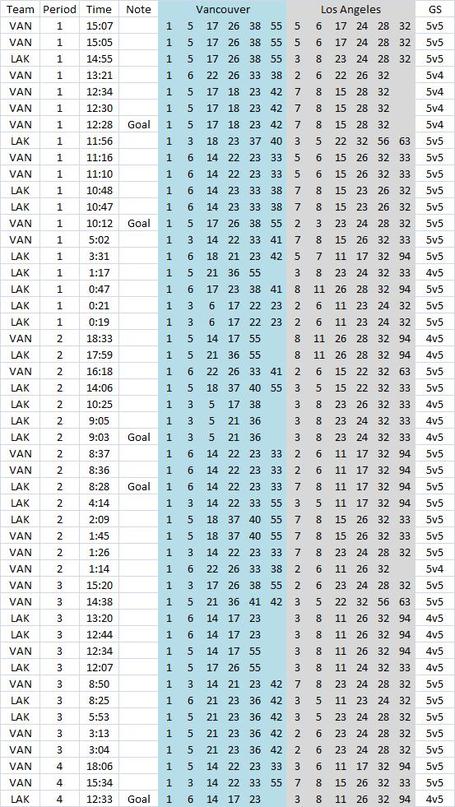 As I mentioned in the opening, the Kings were outchanced 9-4 in the first ten minutes of the game which means they outchanced Vancouver 5-1 through the rest of the period and followed that up with a strong second period.  The third period saw fewer official chances but it was a much more exciting third period than the first game.  For example, with about four minutes to go in the third period, Drew Doughty broke up a Sedin Bros. two-on-one.  Because the Sedins didn't get a shot toward the net, it doesn't get included as a scoring chance, but it sure had me worried.  That's a pretty extreme example, but that kind of thing was happening quite frequently in the third period.  One other oddity to note is Vancouver's scoring chance total compared to their shot total.  Usually teams have significantly more shots than scoring chances, but in this case Vancouver had 25 chances on just 26 shots.  CBC was made a big deal of how often Vancouver was missing the net and it's worth pointing out that on several of those misses came from good scoring areas.  On to the individual chances (the individual chances have also been added to the Game One recap for those interested): 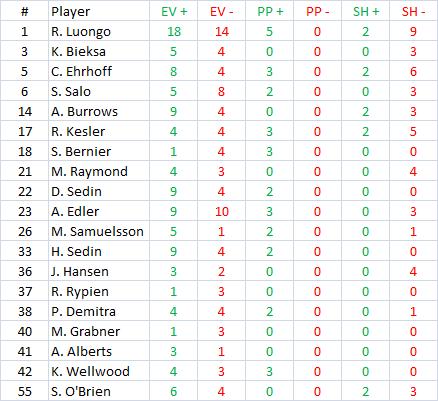 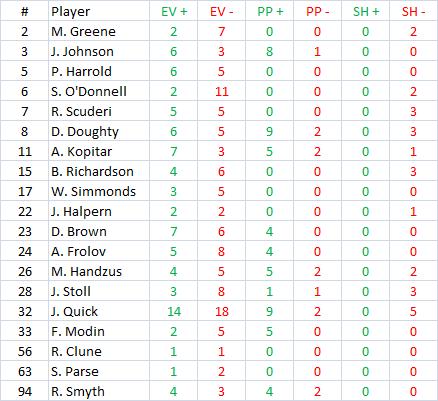 I really liked the adjustments that Terry Murray made to his lineup.  I actually considered making him one of the goats of game one just for playing Ivanans.  You don't play goons in the playoffs!  Never, ever, ever.  Needless to say, the fourth line was much better tonight and Richard Clune in particular.  He only played about 6:30 but he played a physical style and even drew a penalty in the second period, which lead to the Kings' first goal.  As for the first line, Justin Williams was awful in game one.  I was surprised to see him out of the lineup completely but the first line was miles better with the Wayne Simmonds than they were in game one with Williams.  The New Mike Grier - it is a racial comparison but it's also a style thing; there's a reason he's not the New Anson Carter (title currently belongs to Alex Burrows) - even got his first ever playoff goal to tie the game in the second and was just plain physical all night.

On the Canucks' side of things, I was less impressed with Vigneault's only move.  Grabner didn't do a whole lot and the Canucks weren't any better on the PK with Pettinger sitting in the press-box.  It really is helpful to have a fifth regular penalty killer in the lineup so Pettinger probably belongs.  If it were up to me, Grabner and Rypien would be out while Pettinger and Hordichuk would be in.

The Sons of Light

3. Anze Kopitar - He played a great game tonight and of course scored the OT winner.  For some reason Vigneault only matched Kopitar with a defensive pairing and let the forward lines run wild.  The result?  At EV Kopitar was 2-3 in chances against Henrik Sedin and 5-0 in chances against other centers (3-0 Kesler and 2-0 Wellwood).  Vigneault should be working for that Sedin match but he isn't and Kopitar made him pay, although his EV goal did come against the Sedin line.  That goal was pretty interesting because it started with Salo making a bad pinch at the L.A. blue-line.  Vancouver's defenders have been very aggressive in the offensive zone in trying to maintain pressure.  Salo was doing it there and didn't realize he was caught until it was too late and the Kings scored on the ensuing 3-on-1.  The Canucks have often looked very good in the offensive zone when they've taken an aggressive posture, but it does open them up to high quality chances against when a pinch doesn't work.

2. Jack Johnson - Do I just feel bad for naming him a goat last time?  I don't think so, I really liked his game.  Now, he and Harrold were kept away from the Sedins as much as possible and they didn't exactly dominate.  Still, Johnson was very respectable at EV and downright fantastic on the PP.  At the beginning of the game the Kings were trying to dump-and-chase to gain the zone on the PP and it wasn't really working.  Johnson recognized it and started carrying the puck over the line with speed to gain the zone with possession.  He was very responsible in his selection, not forcing the play, but taking it when it became available and it was very effective.  One of the rushes to gain the zone helped establish possession for the Kings on their first goal.  Later in the sequence, Johnson made a nice pass out front to give Modin the open net.  Then, on the game-winner, Johnson made a nice fake to open up a passing seam for Drew Doughty before passing him the puck.  Doughty took advantage of the seam and Kopitar scored.  Johnson didn't take on the toughs, but he's a big reason the Kings won tonight.

1. Drew Doughty - He basically played half the game.  His TOI of 32:56 was more than minutes higher than any other Kings' defender.  When the Sedins were on the ice at EV, it was usually Doughty and Scuderi who were there to greet them.  As I mentioned above, he successfully broke up a two-on-one from the Sedins with about four minutes to go in the third and he was instrumental in the winning goal.  And he did the little things, my favourite being his pass to the Canuck forward to get an intentional off-side and move the puck into the Canucks' zone.  He was 3-3 in scoring chances against the Sedins and 3-2 when the Sedins were on the bench.  With the series going back to L.A., I'll assume that the Sedins are going to be seeing an awful lot of Doughty.

The Sons of Darkness

3. Andrew Alberts - I'm sorry, I really am, but this guy kind of sucks.  The Canucks did out-chance the Kings when he was on the ice, but three minor penalties in one game is pretty unforgivable.  Even if you only give the guy who takes the penalty half of the responsibility for the GA, each penalty still works out to about -0.05 to -0.1 goal differential and -0.15 to -0.3 goal differential is pretty terrible.  The fact that each of the penalties was completely deserved doesn't exactly help matters.  The fact that he may have gotten more if he wasn't benched for the last half of the game (he didn't take any shifts after that third minor) is also pretty telling.

2. Sean O'Donnell - He and Matt Greene got taken to the woodshed... which is where someone caught them discussing communism and brought them to the town square to be flogged.  It wasn't quite forty lashes, but eleven still hurts.  Now, they got some time against the Sedins to facilitate the sheltering of Harrold and Johnson BUT (1) it's not like they were hard-matched - they weren't even the first choice - and (2) the reason Harrold and Johnson were sheltered was so that something like this wouldn't happen.  Furthermore, it's not like they were saddled with difficult starting positions: O'Donnell was out there for 5 offensive zone draws and 4 defensive zone draws so, not bad at all.  -9 on EV chances is really bad no matter what but when you put up a -9 against generally middling comp with middling starting positions, you've really done something special.  The Kings are already playing Doughty half the game so they can't really play him any more.  O'Donnell just needs to be better.

1. Canuck Fans - Seriously.  A "Ref(s) you suck" chant?  Twice?  When the calls against you weren't even particularly poor?  Alex Burrows (and/or Bruce McCurdy) has taught you well.