Like Scott, I've decided to track scoring chances for one of the playoff series.  Unfortunately, I've been tasked with tracking chances for the Colorado Avalanche vs. San Jose Sharks series.  As I've talked about before, the Avalanche have been over-matched nearly all season, but Craig Anderson's early season performance was so good that the Avs got a big enough lead on 8th place that the late season slide wasn't enough to bump them from a playoff spot.

I don't expect the playoffs to be any different. The Avalanche will likely be heavily outshot and outchanced by some big margin and only Craig Anderson will be able to save them. So I was somewhat surprised by Colorado's performance in game 1, though I'm not confident in repeatability. Colorado outshot San Jose 30-26 overall and 27-18 at even strength.  Colorado did have an overall Corsi of -6, which means San Jose had more zone time than the shots data indicates.

This game was a stilted, choppy affair, mostly played between the circles, punctured by bursts of activity around the net.  I wasn't really excited by this game at any point, but that's likely because I chose to record the Avs feed, meaning I got to listen to Peter McNab do color commentary for sixty minutes, plus intermission time.  It was agonizing. McNab is the worst color guy in hockey and I don't think it's close.  I know that Capitals and Flyers fans like to make fun of Bob Errey from the Penguins broadcast team and I've talked about Brian Hayward from the Ducks broadcasting team before, but neither of them come close to McNab on the agony scale.  By the end of the game, I was getting angry every time he spoke.  It's not that he's a giant homer in every bit of analysis that he does, let's face it most color guys are, it's that his awareness of what's going on is nil.  He talks about situations before he realizes what happens and when the replay shows something other than what he's talking about, he doesn't correct it, he tries to make something up instead.  He's brutal.

I made sure that I recorded the Sharks' broadcast for game two.

Scott worked up the definition of scoring chances in his post on Los Angeles vs. Vancouver, and I'm going to steal it because it's excellent:

The chances at evens were even and that's what I saw during the game.  Colorado was more inclined to throw things at the net from a distance and hope for a mad scramble in front.  They got to the front of the net pretty often, but they weren't really able to tip many pucks.

San Jose chose to match Colorado's top line fronted by Paul Stastny with Devin Setoguchi, Ryan Clowe and Joe Pavelski and the Colorado kids won the matchup ever so slightly.

Meanwhile, San Jose tried to get Joe Thornton's line out against everyone else, and by my eye while watching and by the numbers, that line was completely underwhelming.  They weren't generating chances or shots and allowed Colorado's lower-tier players to play them to a standstill. 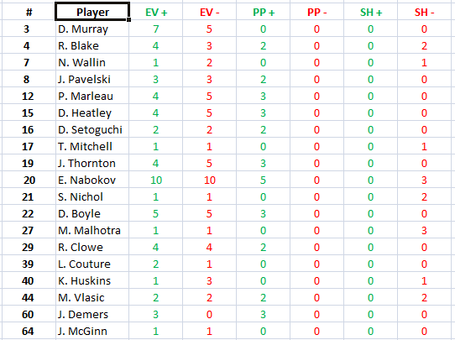 San Jose was able to get to the front of Colorado's net pretty easily and they had an striking number of tipped pucks.  This is going to hurt Colorado pretty badly if it continues.