When I set out to watch the series between the Kings and Canucks, one of the more exciting features was a chance to see old hands Smyth, Stoll and Gre... well, I'll be honest, Smyth and Stoll.  And, yes, it was great to see Stoll score on the power play and Smyth taking punishment to make a play time and again but the whole game had a decidedly Edmonton-in-Dallas feel to it right down to the close-but-no-cigar loss in overtime.  And as an Oilerskings fan, that's downright depressing.  You want to know who I hate more than the Canucks?  The late 90s and early 00s Dallas Stars.  Dammit.  A look at the game's scoring chances and some further analysis after the jump.

For those who'd like a definition: a scoring chance is defined as a clear play directed toward the opposing net from a dangerous scoring area - loosely defined as the top of the circle in and inside the faceoff dots, though sometimes slightly more generous depending on the amount of immediately preceding puck movement or screens.  Blocked shots are generally not included but missed shots are.  A player is awarded a scoring chance anytime he is on the ice and someone from either team has a chance to score.  He is awarded a "chance for" if someone on his team has a chance to score and a "chance against" if the opposing team has a chance to score.  And, of course, a big thanks to Vic Ferrari for making the whole damn thing possible with his awesome script.

I'm pretty sure that the individual numbers didn't go through the program quite properly and I haven't yet had time to go through manually, but I'll make sure to add them when I get them.  Looking at nhl.com, it looks like the TOI from the five minute major was counted as EV TOI and that ain't right so it's possible that the problem is with the way the data was entered on that end.  Either way, individual numbers for this game may be posted later once some of the logistical stuff gets worked out.

Logistical issues aside, the chances paint an interesting game.  The Canucks came out like their lives depended on scoring first.  In the first period, they were simply dominant and yet couldn't score. Jonathan Quick was phenomenal, making a large number of very good saves to keep the game tied at zero going into the second.  And in the second, it was largely a game of special teams on both sides which helped to lull the Canucks to sleep, or so it seemed.  The major penalty to Andrew Alberts hurt the Canucks badly.  It obviously gave the so-far hapless Kings an opportunity to tie the game, which they did but because Alberts also received a game misconduct, it also seemed to influence the Canucks' strategy as defenders weren't jumping into the play nearly as often and the Canucks went with a - to that point very effective when used - two-man fore-check (2-1-2) much less frequently.  The result was a lot less chances on both sides of the puck and a downright boring third period.  From the Alberts' penalty mid-way through the second period to the end of regulation there were only four scoring chances in total at even strength, each team with two and the Kings with none in the third.  Things opened up again in overtime but the Canucks were unable to dominate like they were in the first period.  In the end, however, the Cancuks came through.  Henrik "Doesn't Deserve the Hart" Sedin made a beautiful pass to Mikael Samuelsson who made his shot to send the crowd home happy and me into a frenzy of holy profanity.

Update To Scoring Chances: I entered the data manually to come up with the individual scoring chance numbers for the game as well as the timing for all of the chances.  Here we go: 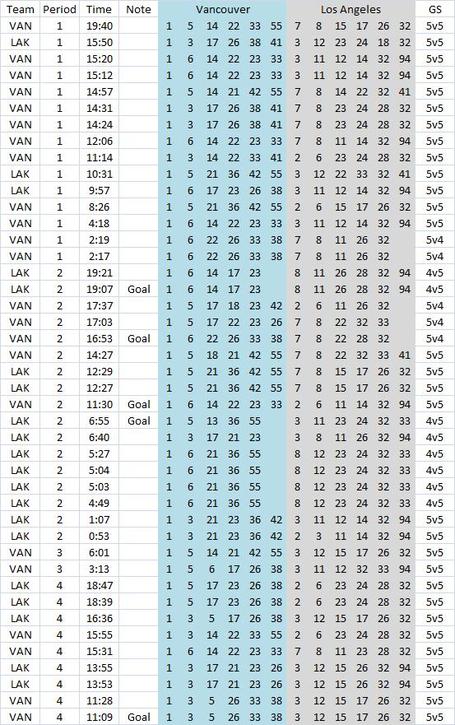 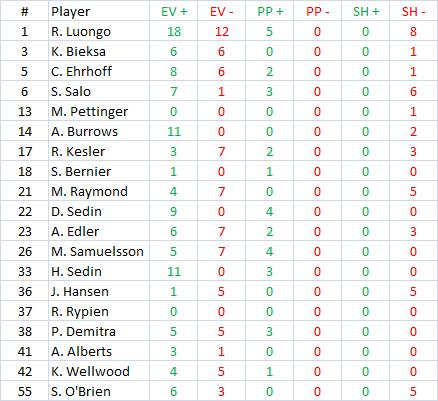 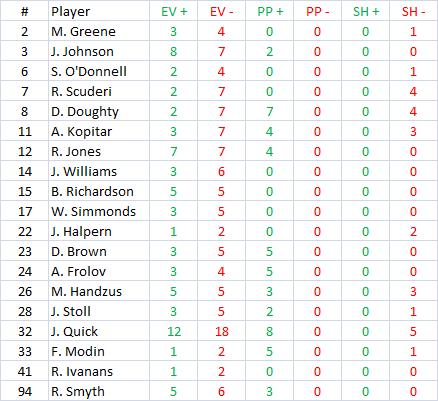 3. Alexander Edler - He played an exciting game tonight with a lot of hitting and smart pinches which makes him an easy guy to pick.  Along with Sami Salo he took on the Kings top line and did a fantastic job of shutting them down.  In the third period, the Kings didn't have any chances, but they came close a few times.  On one occasion, Roberto Luongo was caught swimming as Anze Kopitar danced with the puck.  But Edler was able to stay in position and force Kopitar to the outside, where he wasn't even able to get a shot on goal.

2. Jonathan Quick - What a fantastic game from him.  The Kings were bombarded in the first and Quick stood tall in goal.  I've been cheering for the Oilers all season and I've got to say that it's nice to watch a goalie who's both positionally sound and able to make the great save.  There was absolutely no doubt about the Kings' best player was tonight and that should put to rest any lingering doubts about whether or not Jonathan Bernier is going  to get to start in this series (answer: no).

1. Henrik Sedin - He played a great game.  In the first period the Sedins and Burrows looked unstoppable.  They were winning battles and creating chances seemingly at will.  Even in the rather dreary second half, the Canucks looked most dangerous with Henrik's group on the ice.  Then there was the stick-stuck-in-helmet issue - a highlight for me to be sure.  But, as so often happens, what made Henrik the game's best player was his best skill.  He made a beautiful pass to his brother on the second goal and another outstanding feed to Mikael Samuelsson on the game-winner.  A great game from Henrik.

3. Jack Johnson -  He was bad.  He wasn't all bad, but he panicked taking a puck-over-glass penalty which lead to a goal early in the second period and just generally didn't look confident with the puck.  He played a little bit against everybody since Terry Murray apparently wasn't too concerned with getting the right match-up and when he was out against the Sedins, the end result wasn't pretty.  In overtime, the result was the game-winning goal.

2. Justin Williams - He gave the puck away all night.  It cost the Kings on the second Vancouver goal but that was most certainly not an isolated incident.  He played on the Kings top line with Smyth and Kopitar and was clearly the worst player out there.  On top of it all, he added a minor penalty to the mix.  If the Kings are going to have a chance in this series, they're going to need better results from their top unit and Williams needs to be it.

1. Andrew Alberts - Two penalties on the night, one of them the major that changed the game.  In Alberts' defence, it was difficult to know where the line was with the officials.  There was plenty of stick-work, charging, and all-around mayhem before Alberts got tossed. Still, slamming a guy face first into the boards usually doesn't fly.  The Canucks were dominant before Alberts smashed Brad Richardson head-first into the glass.  Afterward, not so much.  I don't know if there will be a suspension to Alberts but if I'm one of his Canuck team-mates, I'd be awfully tempted to send a tape over to the NHL.

Update After Individual Scoring Chances: Well, by the numbers Henrik Sedin - and that whole line - had a tremendous game so I damn well better have given at least one of them top honours.  Sami Salo looks like he actually had a better game than Edler, though apparently Edler stood out more (and not just to me), but that's a fantastic result from Salo.  On the Kings side, I'm happy to stick with Justin Williams as a goat and find it somewhat comical that the guy I saw bad was the one player to post a positive chance differential.  The argument in the comments was over Johnson-Jones though it looks like from the numbers the pairing of Doughty-Scuderi is the one that the Kings really need to play better.  Sure, Johnson-Jones looked exposed at times and just awful on the last goal but if Doughty-Scuderi aren't going to be able to handle the Sedins, LA is going to have a tough series ahead of them.