Share All sharing options for: Penalty Kill Save Percentage - Final Tally and Playoffs

With the regular season now over I decided to take one last look at penalty kill save percentage.  First off, I'll take a look at the numbers of the leaders from December to show the kind of regression to league average we expect with this statistic.  Then, I'll take a look at each of the goalies involved in the playoffs and their save percentage by game state (PK and EV) to see if there's anyone who had a PK save percentage that made them look great in the regular season but isn't such a good bet to repeat throughout the playoffs.

In the original study earlier this season I looked at goalies who had faced at least 60 shots and created two tables, one for goalies who had a PK save percentage above .900 and another for those with a PK save percentage below .840.  So we're looking at the guys who did the very best and the guys who did the very worst.  Historically, an average save percentage on the PK is about .866.  I like to calculate "goals saved above/below average" and the number I'm using for "average" is that .866 figure.  The two tables below show how the best and worst up to December 8th fared in the rest of the season:

As we can see, in both instances there was a strong tendency to regress toward the average of .866.  Of the fourteen goalies in the study, only Vesa Toskala, Ray Emery and Jonas Hiller ended up further away from .866 in the second sample of games than they did in the first.  In Emery's case the second sample only had 33 shots so an extreme result can easily be discarded.  Toskala's number is amazing considering just how bad his first number was.  What a frustrating season for fans of the Toronto Maple Leafs.  In Jonas Hiller's case, he's further away from .866 but in the opposite direction.  His season started off very poorly on the PK and ended very well.  At any rate, I hope that this shows a couple of things.  First, a playoff series is going to be a very small sample so anything can happen! Second, goalies with an extreme result one way or another probably shouldn't be counted on to reproduce that number.  If we were taking bets on the PK save percentage for these 14 goalies for the last part of the season, league average (.866) was a better predictor of their performance than was the first part of the season in 9 out of the 14 cases! 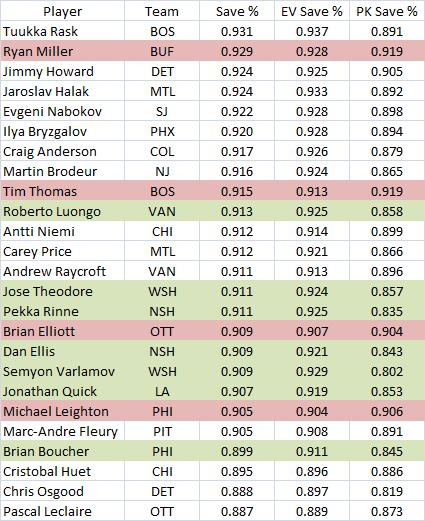 Some interesting things to note include Nashville and Washington who each have both goalies highlighted in green.  This may imply that those teams aren't very good at controlling shot quality on the PK.  It may also signal that those teams have had very poor luck with their goaltending on the PK.  If it's the former, it's a somewhat new development.  Although both Nashville goalies had a poor PK save percentage last season, in 2007-08 Dan Ellis was among the league leaders with a PK save percentage of .918.  For Washington, Semyon Varlamov posted .886 last season if we combine his results in the regular season and playoffs.  If I were a fan of the Predators or Capitals, I would find some hope in the strong EV performance and realize that my goaltenders are probably better than their overall save percentages imply.

Another interesting case is the Philadelphia Flyers.  Michael Leighton benefited from some extremely good luck on the penalty kill while Brian Boucher was very poor.  At EV - a better predictor of future performance - Boucher is actually the better goalie.  Now Boucher still isn't very good but if Leighton were healthy the Flyers would likely be playing someone who is even worse.

The goalies who are probably worse than the overall save percentage might imply?  In addition to Leighton we have Tim Thomas who isn't likely to play in the playoffs.  But even if he did, at least he has a nice track record of performance to suggest he's a pretty good goalie.  Brian Elliott does not.  The Penguins weren't able to get enough pucks past him last night but Ottawa is much weaker in goal than Elliott's .909 overall save percentage implies.  And finally, Mr. Vezina himself, Ryan Miller.  .928 at EV is still awesome.  He's definitely a good goalie but his numbers this season have been somewhat inflated.

Finally, Jonathan Quick - not as bad as you might think.  GOilerskings!