Share All sharing options for: Magnus Pääjärvi-Svensson Interviews With The Copper & Blue

Pääjärvi. One name to save them all.  In an organization that has one actual left wing over three different professional teams, Pääjärvi is The Swedish Salvation.  He was a top-five talent that fell to the Oilers at 10th in the 2009 draft, and he's not disappointed anyone since.  He's played three seasons in the Swedish Elite League and by all accounts has acquitted himself well.  Johan Barrander did a wonderful scouting report on Pääjärvi in December, and in it he noted:

Pääjärvi's greatest strength is his skating, he is incredibly fast and has the ability to put in an extra gear. Think of him as one of those nitro-charged muscle-cars. Just when you think he's reached top speed, there's another burst that separates him from defenders. Most of the time he breaks in from the wing, gets separation and heads for the net. He needs to work on his finishing moves though, as he has a tendency to end up too close to the goalie before shooting or making his final move. But if he keeps working at it,  I'm positive we're gonna see a distinct increase in goals.

He's a really good puckhandler and possesses great balance, making it hard to grab the puck from him. Offensively he's pretty much the complete package, he has a nice wrist shot and can unload with the slapshot, but as I alluded to earlier he has a tendency to look for the shot first and occasionally misses teammates with better positioning. He's is a great passer though, but needs to work on his offensive awareness.

The scouting reports agree with Johan's take.  From Redline Report at the draft:

...possesses blazing speed and is the best pure skater in the entire draft. He's also got good size and strength, and has been competing against men in the Swedish Elite League all year, so he may be ready to step in and play in the NHL right away.

And from Elite Prospects:

An offensive type of player that skates very well, has fine technical skills, excellent hockey sense and a nose for the net. Pääjärvi is very dangerous one-on-one and also a gifted playmaker, although his sniper instinct is more obvious.

Johan interviewed Jimmy Hamrin in that same scouting report and this was Jimmy's opening line: "Pääjärvi is the type of player who can not fail to make the NHL, given his size, stunning skating ability, technique and attitude to training."

The motivation for that training?

"I hate losing but I don´t want to show it to the opponents. I try to take the anger with me and use the energy in practices and games."

Once again, we called on our good friend Jimmy Hamrin, one of the best hockey bloggers in Sweden, and certainly the best one that's covering Timrå.  Timrå is the current home of Anton Lander, the subject of our previous joint-effort interview, and Magnus Pääjärvi Svensson.  I'm now more indebted to Jimmy for this interview - he drinks for free if he should ever make his way west for a vacation.  After the jump is our conversation, through Jimmy, with Pääjärvi.  Make sure that you read Johan's scouting report, as it's the most in-depth take on Svensson I've read anywhere and it brings context to Pääjärvi's game and this conversation.

C&B:   In your Swedish Elite League career you have so far played in 134 games and yet you have only 12 penalty minutes in total.  What an amazing statistic!  Some people look at that and think, "Wonderful, he's very disciplined!" while others look on the negative side and see it as a sign that you do not play a very physical game.  Do you consider yourself a physical player?  A disciplined player?


Pääjärvi:  Haha, I knew this question would come. Well, the physical game is something that I need to improve, that´s for sure. But still I believe that I win a lot of puck battles without hooking or holding up players. I also believe that I draw a lot of penalties and get power plays for the team, but that doesn´t show in the statistics.

C&B:   I notice on your website that you list your favourite player as Maxim Afinogenov.  I was surprised it wasn't a Swede!  What is it that you like about Afinogenov's game?  Do you try to model your play after his game at all?

Pääjärvi:  I love everything he does. His style, his speed and technique. I try to learn details from him, like the way he gets to net and the way he skates. I also look at all the best players like Ovechkin, Crosby, Malkin etc and try to do the things they do stuff they do but it´s not easy of course.

C&B:   Your older brother Bjorn played junior hockey in North America in the Western Hockey League.  What made you decide to stay in Sweden for your junior years?

Pääjärvi:  I actually had in my mind to go to Major Junior, but when I got to play against men in the SEL on regular basis as a 16 year old, it became pretty obvious that the best thing for me was to stay in Sweden.

C&B:   Several people noticed that national coach, Pär Mårts, did not give you much ice time in the semi-final game in the World Junior Championships, especially when your team was on the power play. Why do you think you weren't out there?

Pääjärvi:  It wasn´t something I really took notice of. I think I got a lot of icetime on the PP but maybe I sat out one or two PP-shifts in that game. And if I did it was because he thought other players were hotter that night and then he would be right doing so. In the tournament in general I think I was both up an down for my part. I scored a lot of points but some games I didn´t really get my game going. I think our whole team was up and down, we outplayed the Russians and the Finns but came out pretty short against Canada before the tourney and in that semi-final against USA. 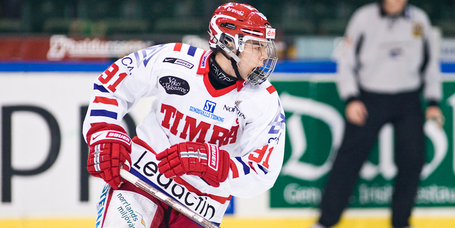 Pääjärvi:  I agree. I build my whole game around my speed so I definitely agree with the scouts. If I can use my speed correctly I can create trouble for the other team.

C&B:   Who is one forward you would really like to play with on the Edmonton Oilers?  What are some of the traits of players that complement your style of play?

Pääjärvi:  I think Edmonton has a great group of forwards despite the tough season so I`d be glad to just play on a team with guys like Hemsky, Gagner, Penner etc. They are fantastic players!  For the second question I´ll have to say offensive players. I want to be offensive in my style and I want to play in the offensive zone as much as possible.

C&B:   Your +/- rating this year with Timra was +14, the second best total on the team.  Is +/- a statistic you put importance on when evaluating your play? Were you playing against the other team's top players, or was that the role of a more traditional checking line for Timra?

Pääjärvi:  We didn´t match lines like you often do in North America. Our line was probably our most offensive though but every line needs to check also. The statistics almost never lie and plus-minus isn´t something I look at after every game but in the big picture after a full season the statistics tell you a lot about how you have been playing  (Editor's Note - Welcome to the Oilogosphere, Pääjärvi).

C&B:   As you probably know, the North American leagues play many more games in the regular season than do the Swedish leagues.  If you eventually go over to North America, do you think this will be a difficult adjustment?

Pääjärvi:  No, if you count in all the games with the national team, juniors, playoffs and so on I´m close to 100 games already. I think I have the strength and endurance to play a lot of games.

C&B:   You have been invited to Team Sweden's training camp for the World Championships this year.  This would be your first opportunity to play with the men's national squad.  What would that mean for you?

Pääjärvi:  A lot!  Really a lot!  It´s something I´ve always dreamed about!

C&B:   In 2004-05 current Oiler Shawn Horcoff was one of the top five scorers in the Swedish Elite League.  Do you remember watching him play?

Pääjärvi:  No, actually haha. Sorry but I was still pretty young then. I do remember though when Malmo was hosting MoDo with Peter Forsberg that year and it was a sellout for the first time in… well a long time.

Pääjärvi:  Yes I have I few but don´t really want share them, haha. The usual one is Päjjan (pay-ahn), but that doesn´t translate well in English I guess.

Pääjärvi:  Haha, that question always comes doesn´t it. Nothing is decided, I have nothing to say because I don´t really know. It´s mostly up to Edmonton and what they think should be best for me. You´ll have to talk Mr. Svensson (Gunnar, a famous Swedish agent and father to Magnus) to know more.

C&B:   Could you consider playing in the AHL?

Pääjärvi:  Well yes, I think it´s a good league to learn how to play in the NHL.  Look at Erik Karlsson in Ottawa, he´s been down there and is dominating in the NHL right now. I´m also pretty open to stay in Timra another year or two if that´s what I need.

C&B:   What do you need to improve most in your game?

Pääjärvi:  Almost everything I guess. I train a lot and I like to train at the things I´m good at to get even better. This season I´ve been working a lot on my shot. I wanted to score more goals and I think I´ve improved some but I still need to score more.  You can´t train on your defensive game, you have to play a lot and get into a routine.

For more on Jimmy's interview with Pääjärvi please visit his site.

For some updates on Pääjärvi and some of his selected videos, check out http://www.paajarvi.com

Like my interview with Anton Lander, I'll leave you with one of Pääjärvi's favorite songs:

If the Oilers have any wits about them, this will be Pääjärvi's goal song.  An entire Canadian arena celebrating a Swede's goal with a Swedish reggae star's hit song is something that must happen.