As with the forwards, I decided to limit my analysis to all defenders who played a minimum of 50 games over the last three seasons.  As you might expect, there aren't as many defenders who make the criteria as there are forwards.  As with the forwards a lot of the people you'd expect near the top of the list are in fact near the top of the list.  However, the variation from year-to-year seems to me to be greater with defenders than it is with forwards which means, in general, defenders would seem to have less influence on the offense (what insight!).  This is also borne out by the average individual points percentage for a defender which clocks in around 29% compared to 70% for forwards.  Any time a player deviated substantially from his three-year average it's marked in either red (down year) or green (up year).  All of the data is at EV.  Here we go: 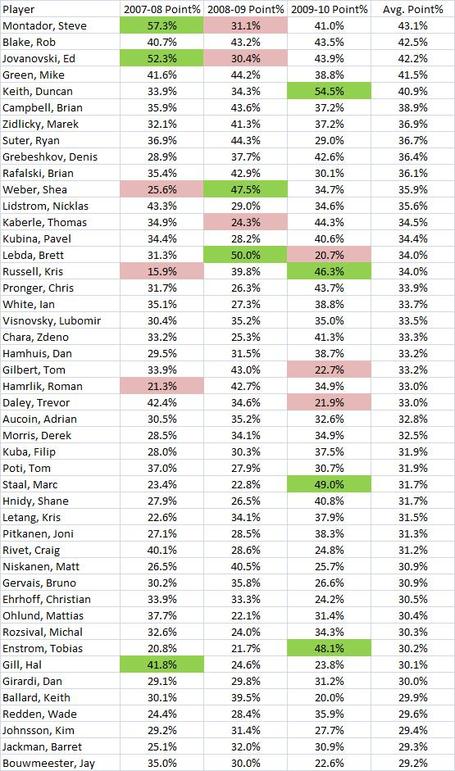 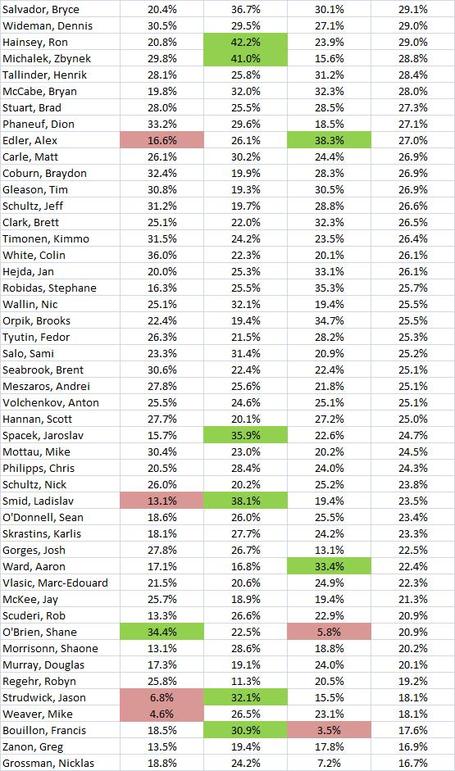 So there you have it!  Some notable names that aren't on the list because of a lack of games played but who are above 35% in both qualifying seasons are Scott Niedermayer, Dan Boyle and the Long Island version of Mark Streit (he qualified all three years but his last Montreal season saw a total of over 60% because he played a lot of forward).  In addition to those three, the players with a 35%+ average are some of the best offensive blueliners in the game... and Steve Montador.  I've checked it and I don't think I screwed up.  At any rate, these players, if nothing else, are quite involved in the offence at EV.  And down at the bottom of the list we find players who are, unsurprisingly, not really involved in the offence.

As an Oiler fan it's interesting to see Denis Grebeshkov ranking so well, up in that 35%+ category.  Part of that is a monster season this year and it seems possible that he might regress somewhat but given the other players up in that range, if I had one in his mid-twenties, I sure wouldn't give up on him.  Grebeshkov's replacement, Ryan Whitney, isn't on the list because he missed too many games in 2008-09 with injury but this year he's at 27.5% and in 2007-08 he clocked in at 30.1%.  So... he had better be a step up from Grebeshkov defensively.  The other offensive blueliner moved this season was Lubomir Visnovsky who didn't do as well as I thought he might but was up over 30% each season which is a nice accomplishment.  He's certainly high enough to say that he's a big part of the offence when he's out there at EV.  The third member of the Oiler blue who qualifies is Tom Gilbert who also rings in with a number well above average despite a poor number this season.  I think there's a good chance we see some of that offence come back in future years.  And for those wondering Sheldon Souray only qualified for one season (2008-09) but he did put up a monster number (47.3%).  I think it's safe to say "offense from the blueline" was a clear organizational strength coming into this season.

I also just wanted to mention Marc Staal and the New York Rangers.  Staal is having a pretty big season by the percentages.  His individual shooting percentage is 8.5% (career 4.3%), his PDO number is up at 101.7 and his individual points percentage is 49%.  Staal is a restricted free agent at the end of the year.  The Rangers already have a lot of money committed to Redden and Rozsival on D but they've been using Staal as their shut-down guy (toughest competition and toughest zone-start ratio) even though he's only 23.  He's been outshot slightly but has actually outscored (percentages) his opponents and all things considered has done very well defensively.  What a time to have the guy hit the (unsustainable) jackpot on offence.  Good for Staal, tough spot for the Rangers.

Finally, Strudwick is so terrible.  If I recall he played some forward in there (the season that's green) and yet he's still in the bottom five for offence.  And he's poor defensively.  But Kevin Lowe sure does know his defenders!  Have faith everyone!