Share All sharing options for: Individual Point Percentage and/or Points Per Goal

In this article, I've calculated the individual point percentage for all of the forwards who played at least 50 games in the NHL in each of the last three seasons.  After the jump I'll present the data and talk a little bit about what it means in some specific instances.

Before I present the chart I'll just talk a little bit about what to expect.  You'll notice right off the top that a lot of the really good offensive players find a home near the top of the chart.  This makes sense.  These players tend to have the offence run through them when they're on the ice.  If there's a goal to be scored these guys are probably going to be in on it.  In Tyler's article (this is the same one I linked to above and it really is one to read) he mentions that, other than the guys at the very top and very bottom, he doesn't see a lot of repeatability in this stat.  Depending on what he means, I may be inclined to disagree.  It looks to me like there are actually a lot of players who stay within a pretty comfortable range where their best season is within 15 points of their worst season.  This strikes me as being very similar to something like shooting percentage.  There's real talent in there but over a short period of time it's soaked in luck so that an individual player might have one or two seasons that stray far from his actual talent.  And, as such, just like with shooting percentage, we really ought to take those "lucky/unlucky" seasons into consideration in player evaluation.

The other thing I wanted to note is that the average for a forward over the last three years is right around 70%.  Any time a player deviated substantially from his three-year average it's marked in either red (down year) or green (up year).  I should also mention that all of the data is at EV.  So here it is: 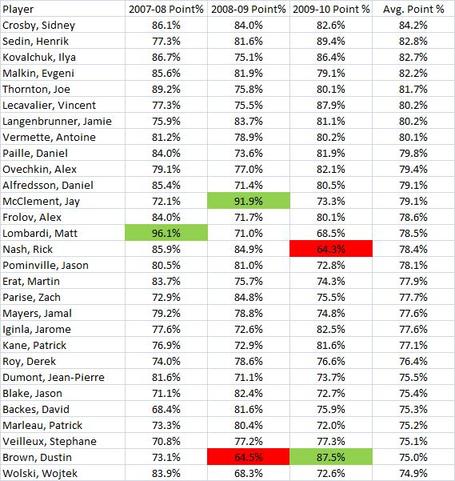 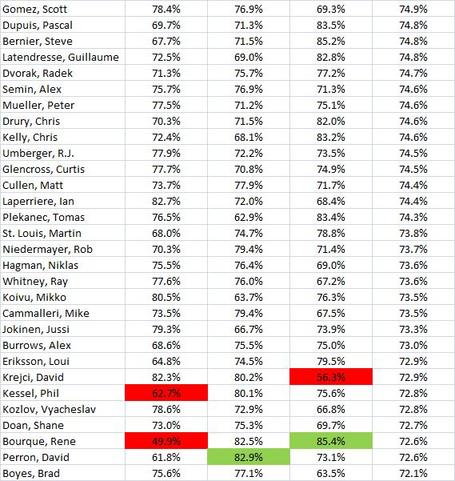 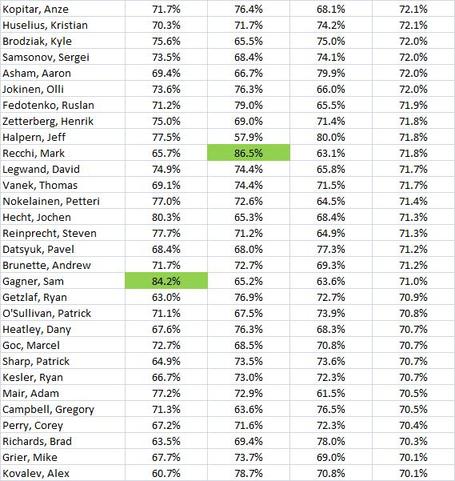 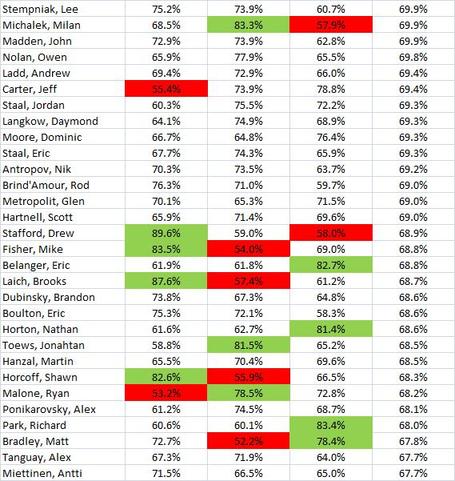 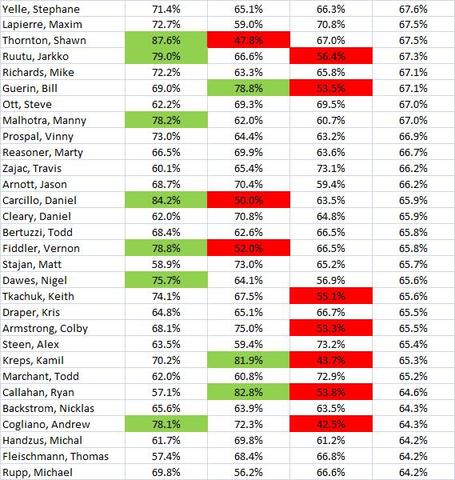 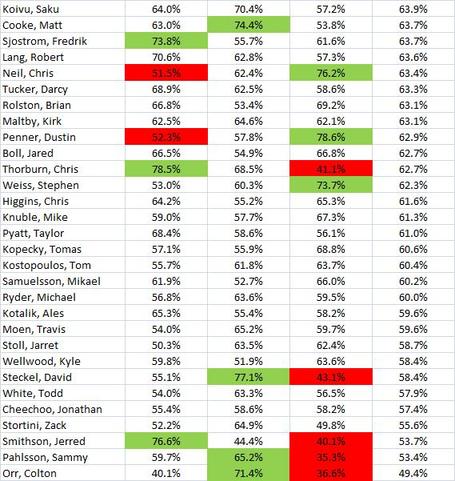 So, a few things I wanted to talk about here as it pertains to the Oilers.  Dustin Penner is having a tremendous season by this metric, far better than anything he's done in his career as an Oiler so far.  He's also having his best shooting percentage season as an Oiler, though it's not ridiculous, at 14.2%.  If I were in charge of the Oilers this would be an awfully tempting time to sell high on Penner if he's regarded as being valuable in other places around the league, not just because of the "lucky" (it may not be luck; it could have something to do with more of the offence going through Penner at EV since he has played a lot less with Hemsky this season) but also because of the direction of the team.  He's a good player so you don't sell him for a 2nd round pick or something similarly silly but if there's a team out there willing to give up a good/elite player between the age of 18 and 22, I really hope they pull the trigger.

Another Oiler worth talking about is Andrew Cogliano.  Tyler mentioned is his piece that both Shawn Horcoff and Robert Nilsson were signed to their rather large stipends after tremendous percentage seasons.  Unsurprisingly, they haven't lived up to expectations.  With Cogliano, it's the exact opposite.  He's just awful by this metric, his personal shooting percentage is 4.8% and his on-ice shooting percentage is down around 7% at EV (his first two seasons were 11.4% and 8.6%).  If the Oilers still believe in Cogliano as an NHL player (and my goodness let it be as a winger) this could be a nice place to take a chance on a long-term deal if Cogliano is open to it.  Something like 6 years at 1.75M could actually end up being a remarkable value deal going forward (and it really does need to be that long-term if a winning Oilers team is going to benefit).

Gilbert Brule isn't on the chart but he's in the exact opposite situation.  His on-ice shooting percentage is up over 9%, his personal shooting percentage is at 13.4% and he's got points on 25 of the 29 goals scored while he's been on the ice at even strength.  That's 86.2% or higher than anyone's average on the chart if you prefer.  Personally, I don't see Brule as an elite offensive player.  If they sign this guy long-term it's likely going to be an overpay and it's probably going to hurt.  I really (REALLY!) hope they decide to trade him instead.

There are some interesting things to note from other teams on here as well.  The Flames are betting that Rene Bourque's two-year flourish as an elite EV player works out.  Rick Nash has way fewer points than he normally given the number of goals scored with him on the ice.  Colby Armstrong picked a really bad year to not get any points.  It will be interesting to see if that impacts his ability to get a long-term big-money deal in the summer (if he's available at five years 2.5M per you need to go for it).  I'll take a look at defenders over the last three years in the next few days.