David Staples takes a lot of guff from a lot of people; I should know because I'm one of them.  We've had some civil disagreements and have had a couple of conversations in the last month around the value of on-ice stats in general and Corsi in particular.  Staples' complete disregard for the value of Corsi and other on-ice statistics is his primary error.  Just kidding.  This little article isn't really about that.  Instead, it's about David's pet project, the error (Now you get the hockey analysis pun! Bazinga!).  Now, I think there are some goofy things about how this is tracked, mainly that it's designed to mirror plus-minus and so he counts all the errors that occur 5-on-5, 4-on-4, 6-on-5, 5-on-4 (!) and 4-on-3 (!!) as EV errors.  Basically, whenever you'd get a minus in traditional +/-, it counts as an EV error.  But that's a quibble.  In general, I think he takes too much flak for this thing; it's interesting work and has some value.  So I decided to play with it a little bit and after the jump we'll take a closer look at what the error might tell us.

First, for those who are all, "What the hell is an error?" here's a description from David's Q+A section:

The general rule is that goal-causing errors are assigned to all the players who have made a defensive mistake in a scoring sequence, or "the sequence of pain" as I like to call it. Typical errors include a player who misses an assignment, fails to backcheck properly, loses a battle in the corner, coughs up the puck, loses a faceoff, or makes a terrible line change.

If you had make no mistake, or if you have been playing well that shift on defence only to be let down by a stumbling teammate, you are not penalized with an error, a demerit point, when a goal against is scored your team.

It's crucial to note that errors are often very small mistakes. The rule is: When in doubt, assign an error.

So it is what it sounds like.  If, in David's estimation, you screwed up and it leads to a goal, you get an error.  He breaks it up into primary and secondary culprits but we're not going to do that here.  The point of assigning errors is to differentiate between those players who are getting minuses in the "on-ice" stats (like plus-minus) but don't deserve them from the guys who are getting minuses because they're screwing up.  So... I've put together two little charts that comprise the first 75 Oiler games (so last night's game against the Wings isn't included), the first one for forwards and the second for defenders: 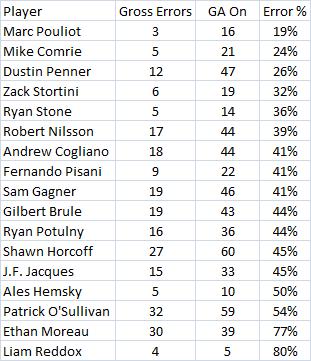 As we can see in there is a pretty wide range amongst the guys playing on a regular basis.  Ethan Moreau is in a whole class of terrible by himself but even excluding him (and Reddox) the range looks to be somewhere between 15% and 55%.  Considering what the error is supposed to measure - guys making mistakes that end up in the back of the net - the list seems pretty intuitive.  Ethan Moreau is a basket case, followed by O'Sullivan, Horcoff and Jacques.  I tend to think these really are the guys doing a bad job in their own end though I'm surprised Horcoff is doing so poorly and that Jacques isn't further from the pack in O'Sullivan territory.  At the other end we've got Pouliot, Comrie, Stortini and Penner.  From watching the games I tend to agree that these guys are either less likely to over-handle the puck and/or less likely to help out down low which leads to goals in which they're not involved and/or aren't very quick on the back-check which gives them fewer opportunities to miss the high man coming back the other way.

Now for the defenders: 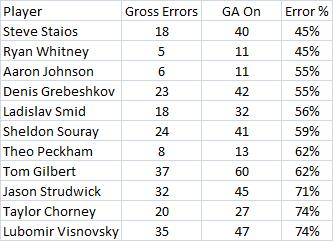 Visnovsky, Chorney and Strudwick screw up a lot.  I admit to being hesitant with Visnovsky but it is true that he handles the puck a lot and is often involved in the play around the puck which means he'll be involved in a lot of the plays that end up in the back of the net.  Chorney and Strudwick just really do screw up a lot.  That said, this list is somewhat less intuitive.  Steve Staios really is steady?  Denis Grebeshkov makes fewer five-alarm blunders than Gilbert?  These are not things I would have expected but with Staios and Grebeshkov gone they're not going to be things I try to look for.

In the end, I still like the statistic (though I'd prefer if it were broken down by game state a bit better) but just as all small-sample statistics it's going to be difficult to use it to come to solid conclusions.  It's a limitation Staples is aware of as he's written many times that it would be better to have this kind of information for all scoring chances against and not just goals against.  But that's a lot of work.  For now, what we've got is what we've got and, if nothing else, it can point us in the direction of things to look for over the last couple of weeks of the season.  For me, it means watching Pouliot, Stortini, Comrie and Penner a lot more closely.  What are they doing defensively to keep from receiving errors?  Right now, I'm guessing that my co-writers here at C+B are just bribing Staples to make those guys look good.  I mean, really; we've got Pouliot (Ben), Comrie (Ben), Stortini (Bruce) and Penner (Derek) leading the Oilers in a significant defensive statistic and O'Sullivan (Bruce) and Moreau (Derek) getting killed.  Really.