Share All sharing options for: March 25, 1982: The double century

Calendar buffs will recognize 28 years as an important period, the so-called Solar Cycle in which exactly one leap day will occur on each day of the week and the calendar repeats. With exceptions that do not apply in our lifetimes, the Gregorian calendar will exactly repeat after 28 years. You can hang a 1982 calendar on your wall in 2010 and know it'll work just fine.

It's a pretty significant fraction of a lifetime, a generation in some families, or a very solid career for an individual; one is lucky to survive three of them. A lot can change in that period of time, including the welfare of the Edmonton Oilers. Special things were happening a Solar Cycle ago; today, not so much. So let's take another skate down memory lane, shall we?

March 25, 1982 was a Thursday, of course. Oilers were coming off a 5-day layoff after a 5-game homestand, and heading down the road to Calgary. The eyes of the hockey world were again still on Wayne Gretzky as he stood on the cusp of another major milestone: the first 200-point season.

Such a figure was unimaginable before the Great One came along. 13 years earlier Phil Esposito had become the first to hit the century mark, and just two years later Espo had surpassed the 150-point barrier as well, setting the new standard at 152. That mark stood as the high-water mark for a decade, as Art Ross winners routinely posted in the mid-130s each year.

Then Wayne Gretzky and the Edmonton Oilers arrived on the NHL scene in 1979. After merely tying for the scoring lead his first season, Gretzky would demolish Espo's points record in his sophomore year with 164, also toppling Bobby Orr's single-season assists mark and Bill Cowley's points-per-game record in becoming the first-ever player to average 2 points a game. To get to 200 required a further increase of 0.5 points per game. Surely that was impossible!

I knew one person who thought otherwise: me. On the night of Game One of the 1981-82 season I chatted with my buds between periods back behind Section E and we talked of our expectations for the new season. What new heights could the Great One achieve? Thinking of the 94 points he had sniped in the previous year's second half, I suggested 200 points was within range, and predicted 80-120-200 which turned out to be conservative simply by not being quite outrageous enough!

The Great One laid waste to the record books in 1981-82 like nobody before or since, inexorably adding points game after game with occasional outbursts of superscoring whenever he got near a milestone or record. I've written before of the surge to 50 in 39, when Wayne scored 15 goals and 10 assists in a 5-game Christmas homestand, and hit the milestone by being setting an entirely independent record - becoming the only player in NHL history to score 4+ goals in consecutive games. In Feburary he demolished Esposito's record of 76 goals (and his own single-season points record) with another amazing surge of 4 consecutive 5-point games, which I'm virtually certain is also a record of its type. The young man who said "my dad always told me an assist is as good as a goal" proved it again and again, getting four primary assists before finally scoring himself in Detroit to tie the record. The next game with the record-breaker on his stick he had a bad angle at an open net and fed it to Jari Kurri with a better angle at that open net, but later demolished the record anyway with a third period natural hat trick to blow open a 3-3 game.

When the Oilers returned home in mid-March for a 5 game homestand, Gretzky's astonishing total stood at 70 GP, 82-105-187. "All" he had to do was maintain that 2.6+ P/G average and we'd see that milestone right at home. Alas, it didn't quite work out that way. Gretzky would get blanked by Don Edwards, Kerry Fraser and the Buffalo Sabres in the first game of that stand. Fraser made an horrific error on a quick whistle to disallow a late tying goal that cost both the Oilers and Gretzky a point. To his credit, Fraser owned up to the blunder after the game, an impressive move for a young official which gained my respect even as I was (am!!) still hating on him for the call. That Fraser is still reffing today, an entire Solar Cycle later, is no mean feat in itself.

The Oilers would not lose another game in 1981-82, not would 99 be held off the sheet. He resumed scoring with 3 assists against the Canucks, then 2 goals vs. the Kings, before another scoring explosion against the Penguins: 5 points including his NHL record 10th hat trick of the season, also breaking his own assists record in the process with his 110th. The Oilers also hit double-digits with a 10-4 win, surpassing 100 points in the standings for the first time. That was one celebratory St. Patrick's Day in Northlands Coliseum, I can tell you.

Needing 3 points in the last game of the stand, Wayne was held in check by the darn Flames for two and a half periods. Oilers trailed 3-1 until Gretzky set up Messier, then scored his 88th of the season 23 seconds later to knot the count at 3-3. But there the score remained, and so did the point count at a frustrating 199 points. Wayne looked visibly disappointed when he skated out as the game's first star. Written all over his face was "We didn't win, and I didn't get the 200th". That matter would have to wait a few days, for the return encounter of the home-and-home.

Unfortunately that game wasn't even on the tube locally, so I could merely listen to the voice of the Oilers, Rod Phillips - another Solar Cycle survivor! congrats, Rod!! - describe the historic moment. Predictably, it didn't take long. Just 9:16 into the first period Gretzky "lost" a faceoff in the Calgary zone, retrieved the puck himself, and skimmed it out to Pat Hughes who connected on a one-timer from the high slot, and Oilers had opened the scoring. There were no ceremonies - the Flames' plan was simply to shut Gretzky out, haha - but as the PA guy announced the assist, a strange thing happened in the Corral: 7234 true hockey fans rose to give the Great One a brief standing ovation in recognition of his truly extraordinary feat. (I could hear the ovation, had to trust Rod on the "standing" part.)

Then it was back to business as usual, the Flames fans trying to get on Gretzky's case, and Wayne successfully getting on theirs by cranking it up. A couple minutes later he got #201, an assist on Dave Semenko's powerplay marker, and the cheers were considerably more muted. :) But the best was yet to come, as for yet a third time that season, Wayne would set an independent scoring record in the same game he was achieving a major milestone, exploding midway in the second for a pair of shorthanded markers just 27 seconds apart that blew the game open at 4-1. From there the Oilers would roll to a 7-2 triumph. The first of these stood up as 99's 12th game winner of the season; the second was Wayne's 90th goal of the season, a level which has never again been reached.

Moreover, the two goals together established yet another NHL record - fastest 2 shorthanded goals - as Wayne once again put an exclamation point on his total dominance. He had surged past 200 points with a relatively modest outburst of 16 points in 5 games, but he stamped his passport in a whole different section of the record book while he was at it.

Historical notes: Not only did Gretzky soar through the 200-point barrier, a week later his Oilers would become the first team to score 400 goals. Wayne would finish the season with 212 points, in on an astonishing 50.8% of the team's 417 GF. The Oil would go on to score 400+ goals in 5 straight seasons, a feat no other team has ever accomplished; Gretzky would score 200 points in 4 of those seasons, 196 in the other. In fact Gretzky has a rank majority (9 of 16) of all the 150-points seasons in NHL history, while his first 12 seasons - from age 18 to 30 - all rank among the top 30 seasons of all time. He was as consistent as he was prolific.

It turned out that the "fastest two shorties" record would be the first of Wayne's marks to be broken by anybody but himself, as it would fall the very next season to, oddly enough, Pat Hughes, who notched a pair of shorthanded markers in 25 seconds. It's also one of the few of Gretzky's records to ever be approached let alone broken; the Great One retired in 1999 with 61 official NHL records; today he has 60. He remains the only NHLer ever to score 200 points in a season. 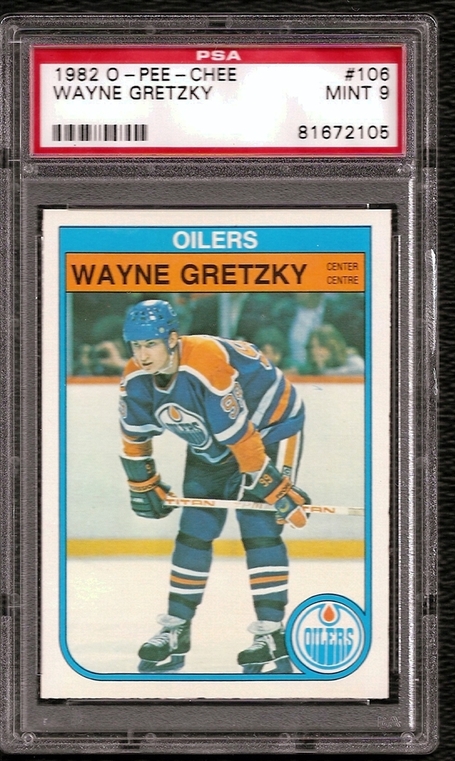