There is only one thing that we ask of Yahweh,
one thing that we seek:
That his favour would rest upon us every day
and that his hand would be with us forever.
We dream about the promised team he is creating for us
and expect to get a foretaste of that victory tonight.

The Prius-driving pinheads have come to mock us
but Yahweh will lead us to victory, all the while keeping us safely in last place.
He has hidden us in the basement of the league for now
but tonight we will be highly exalted.
Our hearts will be filled with joy
when Yahweh lifts us over these West Coast wankers.
The whole season stands as a sacrifice for our sins
but tonight we will put away our sackcloth and ashes,
and sing songs of great celebration.

The Vancouver Canucks are an interesting club. They barely outshoot their opponents at even strength (1680-1641 for +39) and when the score is tied they're actually outshot (516-551 for -35). They have incredible percentages overall (.927 Sv + 9.2 Sh = PDO of 101.9) that are even better when the score is tied (.929 Sv + 9.3 Sh = PDO of 102.2). But the goal differential of +49 looks positively elite. So which is it? About average (outshooting results), downright elite (percentages, goal differential) or something in the middle? My inclination is for the last of those options. I thought it might be fun to take a look at the top nine teams in the West to see how they do when it comes to outshooting and outshooting with the score tied to get a better handle on where the Canucks stand (the numbers are from Vic Ferrari's timeonice.com):

Chicago is just dominant. If it wasn't for the goaltending bugaboo they would be close to unstoppable. A first round matchup with the Wings is almost unfair considering these are the two of the better teams at EV. The Avs, on the other hand, make a pretty decent prize for winning the Conference if they can hold off the Flames to end the season.

The next thing I wanted to look at were the special teams numbers. Are the Canucks vastly superior to the rest of the contenders in the West when it comes to special teams? To do this I looked at overall goal differential on both the PP and the PK which incorporates both offensive and defensive contributions on both special teams. It also incorporates the number of opportunities each team generates and gives up in various situations. The data is from nhl.com: 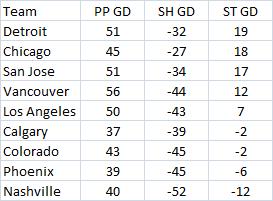 The fact that Chicago is near the top puts them way (way, way, way) out in front of the field as far as I'm concerned and Detroit certainly looks dangerous. The Canucks? They're not so great. Everyone is below the Hawks and I'd say the Wings are a pretty clear 2nd, especially considering they haven't been healthy all year but they are now. The Canucks fit into the next group with the Sharks and Coyotes followed by the Kings, Flames and Predators and then the Avalanche a notch below that. The Nucks' PDO at EV is high and some might nick them more for it than I do but with Luongo I think something around 101 is pretty reasonable. Still, that's a hefty drop from where they've performed to date. Still, the draw is pretty favourable for the Canucks since it's very likely that if they're the third seed they'll only need to play one of the Hawks and Wings in the post-season. That is, unless the Wings manage to finish sixth... in which case I'd still bet on the Canucks only facing one of the two, if you know what I mean.