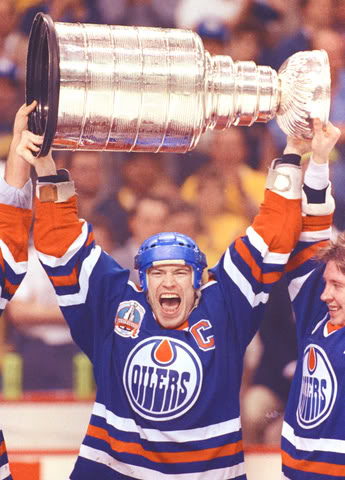 A week late and at least a couple million dollars short, I thought I should comment on David Staples' fine report on the trade SALE of Mark Messier. Here's a link, although the basics are right in the title: Secret cash payment to Pocklington in Mark Messier deal finally comes to light. In it Pocklington admits "There was a couple of million with it."

Well, isn't that a surprise.

First of all, a short lesson in Pocklingtonese for those new to the form. "There was a couple of million with it."

The persistent rumour of the day - 1991 October 1 to be specific - was $5 MM US. For sure the only way the deal made any sense whatsoever was for there to be at least 30 pieces of silver changing hands, because as a hockey deal it stank to high heaven. It stank even before the little-remembered future considerations kicked in, in which the Oilers sent another once-and-future Stanley Cup champion Manhatten's way for a pinch of coon shit.

Moreover, this wasn't even the first time the Oilers got the short end of the stick in what was a series of transactions between the two clubs over the next 3 or so years ...

Trivia question #1: Who is the Only player in NHL history to be named to the end-of-season First All-Star Team at two different positions?

Trivia question #2: Who is the Only player in NHL history to captain two different franchises to the Stanley Cup?

When the Rangers won the Stanley Cup for the only time in even my lifetime in 1994, they were stocked with no fewer than 7 players who had won the Cup with Edmonton in 1990. The Rangers acquired all but one, Glenn Anderson, directly from the Oilers. The Oilers fared alright in the last two of those six deals, but up 'til then it was a massacre.

Finally, after being raped in four previous deals, the Oilers actually got excellent return in the last two, acquiring their core centres for The Little Team That Could. From a Rangers perspective, NYR got decent value for those trades acquiring useful, experienced parts, while winning outright the first four transactions. It's surely inarguable that without that series of transactions, or indeed the Messier one alone, the Rangers wouldn't have even the one Stanley Cup from these last 70 years. Not that I'm bitter or anything.

Of all the players who changed hands over that unprecedented sequence of transactions, the one with by far the most present market value and future market value was undeniably Mark Messier. Far more than a couple of million worth. He was immediately named captain of the Rangers, brought instant credibility to a struggling team, and proved his playing chops and leadership mettle by winning the Hart Trophy and leading the Broadway Blues to the President's Trophy. Two years later he would lead them to the regular season-playoff "double" including the Grail, scoring the Cup-winning goal in Game 7 of the Stanley Cup Finals.

While trading activity between the two slowed down to something approaching normal after 1994, the two teams continued to have a strangely incestuous inter-relationship, essentially training each other's management and coaching staffs. Glen Sather himself moved on to the Rangers in 2000, and hired ex-Oiler coach Ron Low as his new head man. In Edmonton, Kevin Lowe had first replaced Low as coach, then replaced Sather as GM, hiring ex-Rangers assistant Craig MacTavish as his own head man. Today, Sather and Lowe remain in key upper management positions, while things have settled down on the coaching front other than the Oilers hire of ex-Ranger coach Tom Renney.