Russian defenders are shunned by their countrymen - some NHL teams are even more eager to be rid of them! Even when he likes the team and city, these teams would let him go for nothing.

He who acts with wisdom loves himself and those that depend on him; he who appreciates understanding prospers.

A liar never goes unpunished; he who tells lies should be terminated.

Leadership is not fit for a fool. It is a disgrace when a fool is the leader of mighty men.

Visiting Team Scouting Report: Since the last time these two teams met the Predators have gone 6-7-2, a record that was really brought them back to the pack in the Western Conference. If they're going to make the playoffs, they'll need to be better than a .500 hockey team. There are quite a few teams still in the mix so no one can really afford to be worse than .500. Which is why I've included Colorado in the group. Call me stubborn, but I still don't believe. At any rate, I thought it might be fun to handicap the schedule for the Western Conference bubble teams going forward. First up, which team has the most "gimme games" against bad teams? To do this you need to first decide which are the bad teams and I went with Edmonton, Columbus, Florida, Long Island, Toronto and Carolina. If you hope to make the playoffs in the West, these are games you should win: 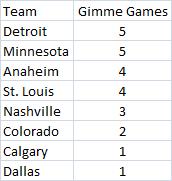 Good news for Detroit and Minnesota, bad news for Calgary and Dallas. Since I've been trained from birth to hate Calgary and from experience to hate Dallas, this is great news! The Predators are right in the middle, not really benefiting from a lot of games against bad teams nor being hurt by only having one. Next up, how many games do these clubs have against the powerhouse clubs, which I've defined as San Jose, Washington and Chicago: 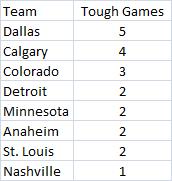 So far, this is going great! Dallas, Calgary and Colorado (in that order each time) have the fewest games against easy teams and the most games against good teams. I'm feeling great about their playoff chances right now! Flames for ninth! Oh, and Nashville does well here. They've already played most of their games against the very best teams in the league, and that should help them going forward. The last thing I wanted to look at is how many games these teams have at home and on the road: 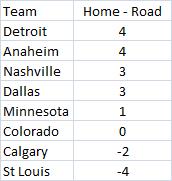 And once again Calgary comes up near the bottom. Too bad :) The teams on top here, Detroit, Anaheim and Nashville, probably have the best schedules overall coming home after this extended break. Now, Colorado does have a nine-point lead on the Ducks so it would take a pretty brutal collapse for them to lose all that ground and their schedule isn't really that bad. Thus, it will probably end up being Detroit, Anaheim and Nashville fighting over two spots in the playoff picture with Colorado holding on for dear life as the end of the season approaches. Since Nashville and Detroit have the head start, it's tough not to go with them for those last two spots. So that's my prediction for today. The current top eight are the top eight to end the regular season with Anaheim giving the biggest push and maybe ousting the Avalanche should they completely fall apart down the stretch.