Share All sharing options for: Penalty Kill Save Percentage Comparison

Just by way of reminder, the average save percentage on the penalty kill is something close to .866 (thanks to Tyler Dellow for that).  So all of the "goals saved above average" numbers have used .866 as average.  Here are the results for the guys who were on top in December, both from the start to December 8th and then from December 9th until today:

So as we can see the leaders on December 8th have been varying degrees of worse since then and some of them have taken big falls.  Some of the teams they play for have also taken a corresponding big fall.  The Thrashers, Bruins, Oilers and Islanders all haven't fared as well since December and the amount of pucks going in on the PK is one of the (often many) reasons why.  Pavelec's performance is the biggest turnaround.  There's an 11-goal difference between his performance on the PK in the first half and his performance in the second half.  That's an awful lot of ground to make up for anyone and the Thrashers aren't exactly long on talent.

Over an entire season, the sample gets a little bit larger and we can put a little bit more confidence in the numbers, especially as the extreme outliers tend to come back to the mean.  It's like the difference between a goalie's overall save percentage after five or six games (not all that meaningful) compared to that same stat over ten or fifteen games (still not great, but it's going to be better).  So let's look at which potential playoff goalies have the highest PK save percentage and who might be over-rated heading into the playoffs: 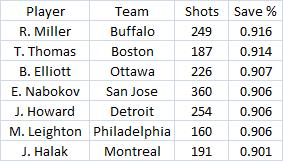 Avalanche fans will be pleased to see that I'm not calling on them to be one of the team's most likely to be hit by a regression... although Anderson is next on the list.  At any rate, these are the teams for whom goaltending has been a strength but may not be quite as good as it's looked.  The teams that should probably be the most worried about this are Ottawa, Detroit and Philadelphia because they're all relying on goalies who don't have a particularly strong track record in the NHL.

And for Oiler fans, we can be secure in knowing that our goalies are not worse than they appear, at least because of this.  Jeff Deslauriers now sits right around league average at .870, Nikolai Khabibulin was a somewhat below average .846 before his injury and Devan Dubnyk is a worse-than-Vesa-Toskala .784.  So, uh, yay?