Columbus Blue Jackets, What Might Have Been In Oklahoma City

In my interview with Oklahoma City Mayor Mick Cornett, he said something that's stuck with me:

C&B:  With all of the work that you did in bringing basketball to Oklahoma City, including bringing the New Orleans team in to play during Katrina and the aftermath and bringing a franchise to the city permanently, can we assume that this was one of your initiatives as well?

Mayor Cornett:    Well, in a sense.  I want Oklahoma City to have the best brand of hockey that it can support.  I feel like we're a really good hockey market, we've supported hockey in the past and I think our market has matured to the point where we deserve and can support a higher level of play.  We almost got an NHL franchise in 1998.  We came right on the edge of getting one, but I think Columbus got the franchise.  We were in the final running for it but didn't get it.  I think that was reflective of the growing market and the fact that we've supported hockey.

What would the the NHL look like today if Oklahoma City would have been awarded the expansion franchise rather than Columbus?

It's well-known that Columbus is struggling financially.  Even with a large bump in attendance, they aren't going to find a profit without a new revenue stream.  The NHL is a gate-driven business, so additional revenue streams aren't easy to come by.  That stream isn't going to come from television - they are only drawing about 15,000 households per game and with their miserable performance this year, it's unlikely to rise as the season comes to a close.

Columbus is the 24th largest market in the NHL, with a metropolitan population of 1,773,120.  With a small population, expected attendance numbers aren't going to compete with the hockey hotbeds or the enormous metropolitan areas like New York or Washington D.C, and they aren't close to competing.  As with any new franchise, the Blue Jackets' attendance numbers were very strong early in their existence, but after the lockout and the lack of playoff hockey in Ohio for four years, attendance took a hit in 2005 and has been in bad shape ever since. 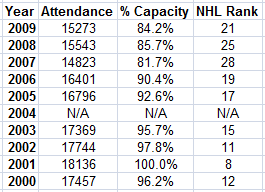 Columbus is in a tight spot.  They can't turn a profit, and haven't been able to ice a winner.  The NHL has a losing team with declining attendance and sagging television ratings.  Scott Howson is trying to save the franchise by fixing the mess he inherited, but has had a tough go of it thus far, even with the Blue Jackets' playoff appearance last year.

What would have happened if the NHL decided to award an expansion franchise to Oklahoma City instead of Columbus?  Firstly, the decision would have been panned, as Oklahoma City would be the 27th largest market in the league, with a metropolitan population of 1,206,152.  Had Gary Bettman passed on markets like Milwaukee, Las Vegas, Kansas City, Columbus, Indianapolis and Houston for tiny Oklahoma City, the media, especially the Canadian media would have trashed Bettman for years - like they still do for the decision to award a franchise to Nashville, the 27th largest market in the NHL.

The Blue Jackets didn't reach the playoffs until 2008-2009 and even then were bounced in the first round by the Detroit Red Wings.  Essentially, the failures of the Blue Jackets on the ice, on television and at the gate boil down to one decision - JMAC Hockey, LLC hiring Doug MacLean as President and General Manager of the club in 1998.

MacLean's record should speak for itself, but MacLean refuses to allow that.  He's too busy talking about how wonderful he is.  How he comes to that conclusion is a mystery, but a quote from an interview earlier this year tells you all you need to know about Doug MacLean:

"I would like to say I've looked at all their acquisitions and I think the team has, with their fan base right now, less credibility than they've ever had in the history of the franchise. It is a disaster there right now. And Scott Howson has made -- I look at the contracts he's stuck with next year -- they've got to dig themselves out of a hole."

The hole is so deep because MacLean spent ten years digging it.  MacLean's record as General Manager and President of the Columbus Blue Jackets over ten years and seven seasons:  165W - 263L - 33T - 31OTL, 394 points for an average of 69 points per year.  Columbus failed to appear in the playoffs under MacLean's reign - the only expansion team of the same era to do so.